Writer-producer-director Preston Sturges (1898-1959) was one of the all-time great artists of American film comedy. He began writing for movies in 1930 but his career as a director was short-lived: he directed just 12 movies and, with one exception, all his best films were released during a five-year period, 1940-44. Most critics regard The Lady Eve and Sullivan's Travels (both 1941) as his masterpieces, though I'd argue that The Miracle of Morgan's Creek (1944) is his best work, and Unfaithfully Yours (1948) and The Palm Beach Story (1942) are right up there, too. His approach to film comedy was uniquely his, and no one, not even the great Billy Wilder and his various writing partners, wrote funnier dialogue.

During the first half of the 1940s, Sturges was under contract at Paramount, and constantly battled both that's studio's front office and keepers of the Production Code, even as the majority of his films were enormously profitable. He left Paramount to form a doomed partnership with (then-) millionaire Howard Hughes and former silent clown Harold Lloyd, hoping to combine the best qualities of Lloyd's silent classics with Sturges's comic style. Later, Sturges moved to 20th Century-Fox but his luck there was even worse. His first of ultimately just two films there, Unfaithfully Yours was a very black comedy starring Rex Harrison completed just as that actor's mistress, popular actress Carole Landis, committed suicide. The scandal severely damaged the film's reception.

At the height of his powers at Paramount, the studio reluctantly allowed him to make a pet project, The Great Moment (1944), a biographical film about William Thomas Green Morton, an 19th century dentist who, in his obsessive desire to relieve pain during surgical procedures refines, perhaps even discovers, the use of ether as a general anesthetic. The unusual film is mostly a biopic in the Hollywood mold, but peppered with darkly humorous moments of a type almost unheard of in a 1940s Hollywood movie. It also features many of the same actors that populated Sturges's comedies: William Demarest, Franklin Pangborn, Esther Howard, Porter Hall, etc., as well as star Joel McCrea. Paramount executives, already hating it, added to the confusion by substantially reediting it against Sturges's wishes, and marketed as another Sturges comedy.

The cut that survives, however, remains a fascinating artifact. It's very different from Sturges's other films, yet oddly powerful and even profound. 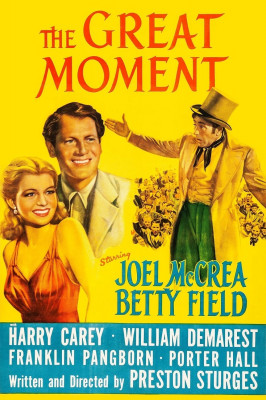 The movie opens triumphantly, with Morton (McCrea) hailed in a street parade for his discovery: "Pain is no more" read signs. Abruptly, the scene shifts to some years after Morton's death, when his longtime friend Eben Frost (William Demarest) visits Morton's widow, Lizzie (Betty Field), returning to a medal given Morton but pawned years before. Like Citizen Kane, the narrative bounces around in time, tracing Morton's life.

Another flashback shows Morton mortgaging his farm to travel to Washington D.C., where he meets with President Franklin Pierce (Porter Hall, oddly well-cast), introducing Morton's patent problems, his discovery and refinement of ether infringed by others, some claiming to have developed the use of ether prior to Morton. This eventually gives way to the main part of the narrative, following Morton courting and marrying Lizzie, and his early struggles with his dentistry, at a time when dental procedures offered no pain relief beyond a swig of whiskey. He begins experimenting with dangerous chloric ether and nearly asphyxiates himself. After experimenting with nitrous oxide (laughing gas), also beginning use during this time, he turns to safer, inhalable sulphuric ether which, inhaled from a distinctive glass device, he dubs "Letheon."

Soon Morton has lines of dental patients around the block, but Morton is convinced his creation can be applied more broadly to general surgery. He convinces a prominent surgeon, John Collins Warren (Harry Carey), to try it -- no other relief is available, so what the hell -- and, miraculously, the removal of a painful neck tumor proceeds with the patient completely unconscious during the operation.

Morton eagerly agrees to allow hospitals use his "Letheon" immediately while he applies for his patent but the jealous medical community refuses to permit its use unless Morton reveals its chemical composition, thus negating its financial value. If Morton waits months, perhaps years for his patent to be approved, he'll be a rich man, but unimaginable human suffering must continue.

Sturges knew how to take full advantage of Joel McCrea, impossibly handsome in his early career, still handsome in the 1940s albeit with a finite range, though within that range he was often superb. He exuded a kind of blundering, dogged sincerity that fits Morton perfectly. Sturges seemed to prefer longtime character actor Demarest at his most blustery and broadly comic, done to perfection in The Miracle of Morgan's Creek. Arguably he's too broad here, but Sturges was probably right that his audience needed someone in the film to identify with.

In 1942 when it was made, medical conditions like cancer were hushed tones: rarely in public, never identified by name in the movies, while in the movies female stars died in their beds looking glamorous and gangsters shot by police clutched their abdomens and fell to the ground without a drop of blood in sight. The Great Moment is likewise bloodless, but the implied suffering in this pre-anesthesia age is difficult to watch. Sturges creates a kind of audience surrogate in William Demarest's character, a former dental patient and among the first to experience the wonders of Letheon and garrulously advocates its use. But his Eben can't watch painful surgical procedures without passing out, the actor's performance is funny and empathetic at once.

Though it's got the trappings of the type of historical biopic popular in the late-‘30s/early-‘40s, Sturges's real interest in the material is how, after thousands of years of unimaginable human suffering, one man developed the means to completely eliminate mortal terror and agonizing pain for untold millions around the world, yet is nearly completely forgotten. Since Sturges's film, historians have generally come to the conclusion that Morton was, at best, one of several simultaneous developers of modern anesthesia, but no matter, the Great Moment of The Great Moment isn't when Morton makes his discovery, or even when it is applied to major surgery for the first time, but rather Morton's response to a terrible quandary: choose between a life of poverty, scorn, and ridicule and release his formula to all, or hold out for untold riches. That's a theme Jonas Salk faced with his development for his polio vaccine, and one that resonates in 2022 with anti-COVID treatments, among many other things.

In this way, The Great Moment is more than a curious aberration of Sturges's career; it's one of his best films, even in its altered form. It's so unlike anything Hollywood was making in the early 1940s that it takes several viewings to really get a handle on the writer-director's unique approach; oddly enough, the film it most reminds me of is Kurosawa's medical drama set during this same timeframe, Red Beard (1965).

In black-and-white and standard 1.37:1 format, The Great Moment looks excellent throughout. The DTS-HD Master Audio (mono) is also very good. Optional English subtitles are provided on this Region "A" release.

Others apparently like The Great Moment, too, as it features some good extra features, including "Great Without Glory," an introduction by film historian Constantine Nasr; and "Triumph Over Pain," an appreciation featuring Tom Sturges (Preston's son), Nasr, and the late Peter Bogdanovich. A trailer is also included.

While I wouldn't recommend this as one's introduction to the irreplaceable Preston Sturges, it's one of his best films and almost unique of its type. Highly Recommended.