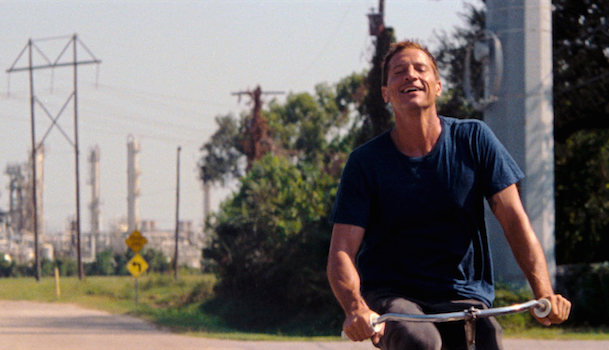 Director Sean Baker (The Florida Project, Tangerine) returns with another character-driven, '70s-styled drama taking viewers on a trip through the lifestyles of the poor and struggling. His new film Red Rocket is spiked with plenty of humor -- mostly pretty dark and ironic -- and his lead Simon Rex seems game to play up his party-boy-doofus comic persona while adding layers of disturbing psychology to his shtick.

We might be inclined to agree with Mikey's middle-aged weed supplier Leondria (Judy Hill) when she mutters that he is "probably going to smoke that shit himself," but Mikey is a successful salesman and soon he starts building a tiny bankroll. Rex plays Mikey as all calculation and cocksure confidence, with no self-awareness and an unstoppable motormouth to match. Like Adam Sandler's Howard in Uncut Gems, Mikey is a shark who can't stop moving or talking, and that persistence can be strangely charming as often as it is offputting. We viewers understand why the people in Mikey's life allow themselves to be manipulated, even when they fully know better.

"Grooming" has become a kind of gross buzzword on the internet lately, but Red Rocket is blatantly a film about a grown man grooming a teenage girl to work in porn for him -- a "suitcase pimp," as Lexi angrily calls Mikey late in the film. And yet, we can't totally hate Mikey. He's kind of goofy and endearing, in addition to being a creep. We feel a mixture of delight and sadness when his inevitable comeuppance arrives (nothing nearly as extreme as what happens to Howard in Uncut Gems), and Baker stages these scenes with a sloppy naturalism that tips the balance from menacing tension to welcome gallows humor.

Sean Baker is so adept at capturing the flavor of a place and casting atypical actors to people it that it's easy to be sucked in by Red Rocket's low-key virtuosity. Admittedly, some situations in the film made me momentarily stop the disc and regroup out of discomfort, but I also found myself seized by giggle fits at some wickedly funny moments. Your mileage may vary, but Baker continues to demonstrate that he is one of the most original and engaging filmmakers working today.

The Blu-ray
Red Rocket is packaged in a cardboard slipcover that duplicates the jacket art. A digital code is included.

The Video:
Red Rocket has an idiosyncratic look that translates quite well in this AVC-encoded 1080p 2.39:1 presentation. Shot mostly on 16mm film with anamorphic lenses, the film offers low-budget grit with a carefully maintained patina of stylization. Colors are often quite rich, with the bleached-out landscape counterpointed with surreal colored lighting or strikingly colorful production design (like the orange of the Donut Hole location).

The Audio:
The DTS-HD MA 5.1 surround mix is as carefully designed and idiosyncratic as the visuals of the film. Dialogue has a guerrilla flavor but is typically easy to parse. Ambience and music cues are layered in interesting ways, with 'NSYNC's "Bye Bye Bye" becoming an unexpected recurring motif of sorts. Optional English SDH and Spanish subtitles are offered.

- An entertaining and informative chat sticking mostly to practical anecdotes about the production of the film. (Daniels participates over Zoom, underlining the status of the film as a production made under strict pandemic-era protocols.)

Final Thoughts:
Another triumph for director Sean Baker. His '70s-influenced sensibility has created a strange hybrid of manchild comedy, carefully observed slice-of-life drama, and queasy mock-sexploitation. Simon Rex is given the most layered character of his career -- and he realizes the role beautifully. Bree Elrod, Suzanna Son, and the rest of the ensemble (of mostly first-time actors) bring a vibrant sense of reality to this often ridiculous film. Highly Recommended.