Kino's Edgar G. Ulmer Sci-Fi Collection is a welcome three-movie set for fans of that genre. The Man from Planet X (1951) had been released to Blu-ray before, but The Amazing Transparent Man and Beyond the Time Barrier (both 1960) are new to Blu-ray; I don't recall ever seeing a video version of Time Barrier that didn't look terrible, so this is good news for sci-fi fans.

The self-described "Capra of PRC," Ulmer had a reputation for making good movies on absurdly low budgets, many for Producers Releasing Corporation (PRC). In the years between his last movie in 1964 and death in 1972, his work was rediscovered and reappraised by influential critics like director Peter Bogdanovich, though praise for Ulmer is usually overstated. He did bring masterly direction to a handful of titles, notably the film noir classic Detour (1945), Bluebeard (1944), and the Karloff-Lugosi film The Black Cat (1934), but Ulmer also produced a lot of junk that's not unjustly forgotten. Of this set of titles, The Man from Planet X is a very good film of its type; The Amazing Transparent Man and Beyond the Time Barrier are not good, though each has its moments. 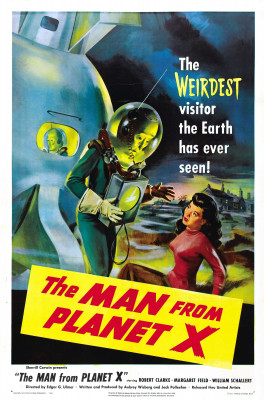 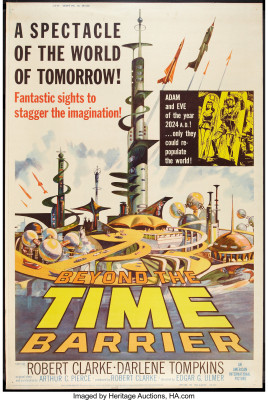 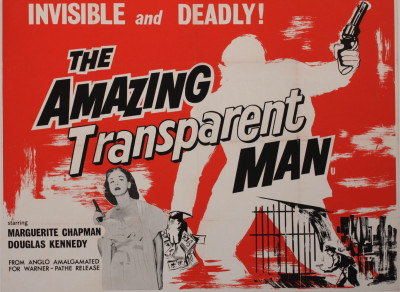 The Man from Planet X was made at the very beginning of the 1950s-style cycle of science fiction films. The genre tropes not yet in place, the movie benefits from an approach and style quite different from other low-budget science fiction movies that followed. It also helps enormously that its story is very limited in scope and characters.

The story follows the appearance of a strange, alien spacecraft in the fog-shrouded moors of Scotland. American reporter John Lawrence (Robert Clarke) and Professor Elliot (Raymond Bond), the latter observing the imminent approach of Planet X near earth's orbit from an observatory, find the diving bell-like spacecraft and its inhabitant, a humanoid alien (Pat Goldwin)* slightly smaller than the average human adult. (The mask created for the creature is immobile but haunting.) They try to communicate with it but are unsuccessful.

Later, unscrupulous scientist Dr. Mears (William Schallert) also attempts to communicate with the alien visitor, Mears hoping to extract from it scientific knowledge that will make him rich. Soon, villagers go missing, including Elliot's daughter, Enid (Margaret Field, mother of actress Sally). Could the alien be the vanguard of a larger invasion?

There are just five major characters and few minor ones in this cheap ($51,000) film, and other than a few exteriors, all of it was shot on cramped stages at Hal Roach Studios, taking full advantages of standing sets and components left over from the big Technicolor production of Joan of Arc (1948). All this helps make the film seem less cheap and more appropriately claustrophobic.

The busy star of the film, Robert Clarke, later in the decade tried his hand at producing low-budget sci-fi films of his own, beginning with The Hideous Sun Demon (1958) and later helped finance Beyond the Time Barrier, in both of which he starred, for both of which he lost his shirt. Though Clarke once again engaged Ulmer to direct Time Barrier, lightning did not strike twice because the newer movie's script is terrible and attempts big scale stuff on a way-too-tiny (reportedly $125,000) budget.

U.S. Air Force test pilot Maj. Bill Allison (Clarke) flies an experimental aircraft so fast it travels through time from 1960 to the super-futuristic year of 2024. A simple but very shrewd decision was to shoot the scenes of Allison taking off at a working Air Force base and having him at land a similar-looking but long-deserted one. Scenes of Allison wandering about the base with its broken windows weed-filled runways is effectively eerie.

All quickly goes downhill, however, when Allison stumbles upon the Citadel, a dystopian underground city where all the citizenry are infertile and all but two are mute. Also there are several other accidental or deliberate time travelers from 1973 and 1994. This aspect of the story might have been interesting, but writer Arthur C. Pierce's script is exasperatingly stupid throughout, particularly Allison's refusal for most of the film to believe he's traveled forward in time, something painfully obvious to the movie audience.

For decades I had wrongly assumed the Citadel sets, dominated by modular triangle pieces, was part of some futuristic exhibit at the Texas Centennial Exhibition Fair Park, where the movie was shot. However, now that one can see the film much better on Blu-ray, it's clear that art director Ernst Fegté simply built them within a barn/hanger structure on the fairgrounds. These sets are a little more ambitious than other cheap sci-fi films of the period, but certainly don't make the movie any better.

The limitations of the low budget are especially clear during the undernourished climax, with the mutant uprising mixing mismatched stock footage from Journey to the Lost City and a couple of extras wearing obvious bald caps.

The Amazing Transparent Man was also shot in Texas, back-to-back with Time Barrier though little, if any overlap in schedules. Boyd Morgan, who played the Captain of the Guard in Time Barrier, is the only crossover actor.

The picture is no better than its intended co-feature but has one major advantage: it's only 57 minutes long. At that length, a movie has to be really, really bad to test this reviewer's patience, and to Ulmer's credit The Amazing Transparent Man moves at a decent clip throughout, even though the entire picture is pretty much limited to the first floor of an apparently real house, a set representing a second-floor laboratory, and a few location scenes.

It's a routine crime film grafted onto an invisible man plot. Mysterious soldier of fortune Paul Krenner (James Griffith at his most weaselly) breaks and incredibly-named safecracker Joey Faust (Douglas Kennedy) from prison, for the sole purpose of having him steal nuclear materials from a heavily-guarded government installation. To facilitate this Krenner has imprisoned German scientist Dr. Ulof (Ivan Triesault) and his barely-seen daughter, forcing him to perfect, kind of, his invisibility invention. Faust is rendered invisible by Ulof's invention, though the career criminal would rather be robbing banks and maybe run of with Krenner's girlfriend, Laura (top-billed Marguerite Chapman), a Claire Trevor/Key Largo type.

Though decently paced, The Amazing Transparent Man exhibits none of the inventiveness Ulmer displayed occasionally in movies like Detour, and there's some question whether he even shot all of this and/or Time Barrier. Some stories suggest Clarke direction some Time Barrier footage while it seems entirely possible a unit production manager or assistant director may have helmed at least some of Transparent Man's second unit scenes, possibly with the main actors.

About the only visual appeal of the film is its lonely Texas plains and the interesting, isolated house where Kenner & Co. are holed up. At a time when most cheap sci-fi pictures tromped over the same, well-trodden grounds of Bronson Canyon, etc., this movie at least looks a little different. The special effects, both optically done and on-set, are minimal and only barely passible.

Licensed from MGM, The Man from Planet X is presented in its original 1.37:1 standard screen format, while the two later pictures are correctly formatted at 1.85:1 widescreen. The latter two are also major upgrades from earlier DVD releases, especially Time Barrier. All three are in black-and-white with Planet X coming off best. All three films (plus the extras) are crammed onto a single disc, but the bit rate seems pretty decent. The DTS-HD Master Audio (mono) of all three is above average. Region "A" encoded.

For such minor films, Kino went nuts in the special features department, with no less than three audio commentary tracks on The Man from Planet X. The first and, for my money, best track is by Tom Weaver, supported by David Schecter, Dr. Robert J. Kiss, and filmmaker Joe Dante. The other two feature Gary D. Rhodes & Ariane Ulmer Cipes (daughter, also an actress in Time Barrier) on one and Richard Harlan Smith on the other. Time Barrier's track is hosted again by Weaver, Schecter, and Rhodes, while Transparent Man's features David Del Valle. Trailers are also included.

The batting average might only be .333, but for hardcore genre fans this is must and the audio commentary tracks are, at their best, enjoyable and very informative. Highly recommended.

*The identity of the mysterious actor playing the alien was unknown for decades until yours truly, along with indefatigable Gary Teetzel, found casting documentation in the United Artists files while we were employed at MGM.