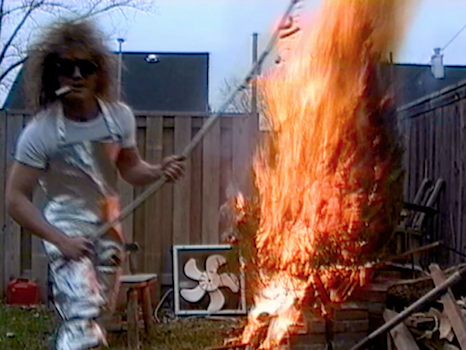 Way back in the 90's, Ralph Zavadil was a no-budget daredevil, cranking out goofy homemade TV shows for his local community cable station in St. Catharines, Ontario, Canada, under the name Cap'n Video. Clips of Zavadil's show suggest a silly and gross precursor to Jackass -- but without the high production values. The 2011 documentary Beauty Day, from director Jay Cheel (Shudder's Cursed Films), covers Cap'n Video's rise to cult stardom and his unceremonious fall.

Actually, in a way, it is an unceremonious fall that helps feed that cult stardom. The film opens with a clip of Zavadil attempting to remove a plastic pool cover with excessive flair. He climbs a ladder bungee-tied to a fence next to the covered pool and jumps off. The gag is clearly supposed to end with Zavadil landing in the middle of the pool cover and pulling it down. However, when Zavadil leaps, he falls straight down and cracks his neck on the concrete next to the pool.

Beauty Day eventually suggests that this clip represents both the apex and the nadir of the Cap'n Video phenomenon. Zavadil survives -- he claims his neck healed after a potent ecstasy trip -- and he manages to sell the clip to various syndicated tabloid shows, growing his wacky mythos. But more attention also means more negative attention and, after some ill-advised gags involving the questionable treatment of animals caused an uproar, Cap'n Video is yanked from his TV timeslot.

The first two-thirds of Beauty Day features Zavadil and his friends in 2009 looking back. They talk about the craziest gags: snorting raw eggs, "tobogganing" off a roof, Ralph lighting his face on fire in the name of a "faster shave." The friends grumble that Ralph would usually set up a tripod and record alone, rarely letting them hang out when he did his stunts. A doomed romance Zavadil had with motorcycle racer Nancy Dewar is recounted wistfully.

As entertaining as Zavadil is, both in the vintage VHS clips and in later interviews, one can't help but wonder where all this is going. Eventually, Beauty Day finds a narrative place to go. Zavadil misses the good ol' days and pitches an anniversary special to the community cable network. They hesitantly agree to give it a chance.

Zavadil uses this not-quite-greenlight as an excuse to start cooking up new gags to bookend his old clips for the special. He even offers to let one of his friends hold the camera for him. Apart from this slight concession, however, Zavadil plunges as foolishly into a series of half-thought-out stunts as he did in the old days. Zavadil decides he should be "born" from a TV, busting through the glass along with a few gallons of homemade slimey "afterbirth." He apparently never thought of using movie-prop candy glass for the gag, and ends up with chunks of the TV screen in his arms and legs.

There are a handful of stunts documented in Beauty Day that made me squirm -- the TV birth, the fiery shave -- but I was probably the most grossed out by a cutaway to Zavadil eating barbecued dog hair. Eewww.

Beauty Day never lacks for entertainment but, even at a fairly trim 90 minutes, it feels overlong. Zavadil is compellingly quirky as both a performer and an interview subject, but he doesn't reveal much about himself apart from his persona. And unlike in something like Chris Smith's American Movie, there's not enough of an emotional stake in this small squad of weird Canadian media makers to deepen the spectacle of Cap'n Video's oddity.

Cheel covers the material with enough panache and there are enough genuine WTF!? moments that viewers drawn to the gonzo outskirts of the pop culture landscape should certainly be satisfied.

The Blu-ray
Beauty Day is packaged with double-sided art. A limited edition version with an embossed slipcover is currently available exclusively from the Vinegar Syndrome website.

The Video:
The AVC-encoded 1080p 2.35:1 presentation looks great. The main documentary footage is pretty boilerplate low-budget-doc, but with some moments of moody lighting and strong colors. The VHS footage included throughout the film is pretty smeary ("it ain't clear as a clown's clit," per Cap'n Video) but it looks oddly well-preserved for its age.

The Audio:
The DTS-HD MA 5.1 surround audio is clean and satisfying for a low-budget doc. There are a handful of quirky needle drops that are nicely supported in the mix. One subtitle option: English SDH.

- A newly recorded track that fills in more info about the production and the stories discussed in the film. Cheel and Zavadil have a nice rapport, and Zavadil is jovial but less "on" than in the film.

Final Thoughts:
An affectionate and well-made doc about a goofball with a VHS camera and not an ounce of fear. Fans of Shut Up Little Man! and American Movie will enjoy every moment they spend with Cap'n Video. The Blu-ray nicely fleshes out the flick. Highly Recommended.