I saw actor-turned-director Robert Redford's film of Ordinary People (1980) several times in the 1980s but not since, and was pleased to find it just as powerful and superbly acted as it struck me then. Adapted from Judith Guest's 1976 novel, the movie is a family drama grappling with subject matter very difficult to pull off cinematically: deeply repressed feelings of anger and guilt, mental illness with no easy fixes, conflicting desires to face and bury fundamental family problems. The film is not perfect, as it's a little pat here and there, and its depiction of psychotherapy is clinically realistic but also idealized. But it was a startlingly good directorial debut for Redford, who never topped it, and it fully deserved the box-office success and critical acclaim it received. 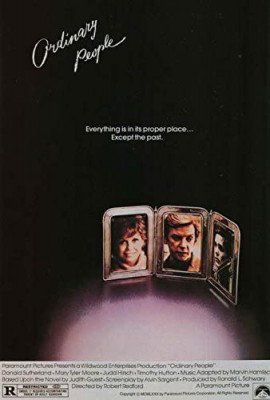 The Jarrett family - father Calvin (Donald Sutherland), mother Beth (Mary Tyler Moore), and teenage son Conrad (Timothy Hutton) - seem to bask in the American dream. They're wealthy, living in a nice home in suburban Chicago, Calvin and Beth frequently vacation in Europe or go on golfing trips with their friends. Not long before they experienced a terrible tragedy when Conrad's idolized older brother, Buck, drowned in a boating accident, but the family seems to have bounced back and life has returned to normal.

But, all too clearly, not at all for Conrad, recently back home after a suicide attempt and four months in a mental hospital. Beth seems to think that Conrad will recover if he devotes himself to his school's swim team (where Buck had excelled), but Calvin gently nudges Conrad to see Dr. Berger (Judd Hirsch), a psychiatrist. Conrad feels jumpy and out of control both at school and especially at home, finding little comfort briefly reuniting with a fellow patient, Karen (Dinah Manoff), who unlike Conrad seems to have put her illness behind her.

All the repressed rage and hostility are believably revealed like the peeling of an onion. Beth is selfish and image-conscious to the point of narcissism. Her adoring relationship with Buck had been almost Oedipal; what love she had to give all went to him, while her relationship with Calvin has been locked in the superficial, chiefly vacations and socializing. She deflects, often archly so, any attempts by Calvin and Conrad to engage in any truly meaningful conversation and turns icy cold when they show any signs of genuine affection toward her. She resents Conrad's illness, his visits to Dr. Berger, and Calvin's attempts to help him, which she regards as coddling.

Calvin, conversely, desperately, desperately wants to help Conrad but has no idea how beyond being unfailingly supportive to the point of trying too hard. Over the course of the story (which seems to unfold over a six-month period), he gradually notices problems in his own marriage further complicating matters. Conrad, the catalyst of the story far more than Buck's drowning, is clearly suffering from post-traumatic stress and survivor's guilt, but equally gnawing is the feeling that his mother doesn't really love him.

The saying goes when one or two actors in the film deliver an outstanding performance, the actor(s) deserve the credit, but when all of the actors are great, credit the director. The latter seems true here, as everyone is outstanding. The credit billing order is interesting: Sutherland, then Moore, Hirsch, and finally Hutton. At the time, Hutton received rave reviews as did Moore for the kind of stunt casting that, in this instance, paid off. Moore and Hirsch were nominated for Academy Awards, and Tim Hutton (competing against Hirsh) won an Oscar.

And yet not nominated at all was Sutherland who, as I felt then and now, gives the best of a film full of great performances. His Calvin is soft-spoken to the point of shyness and sincere in his desire to bring healing to his family but has no idea how to meaningfully help his son or deal with his wife's coldness toward Conrad, something he can't comprehend. There's a remarkable scene where Calvin visits Dr. Berger on the pretext of offering insight into Conrad's illness, only to slowly realize that he really just wants to unload his own confusion about his family's dynamic, locked into pressure-cooker stagnation by Beth's refusal to face it. Throughout the film Sutherland reveals acres of emotional real estate with few words and mannerisms. It's one of the great movie performances and probably the best of Sutherland's long and rich career.

Mary Tyler Moore is unexpectedly unnerving as the mother; it's as if Laura Petrie had built up years of resentment against husband Rob and son Ritchie and, 15 years later, it finally bubbled to the surface. Offscreen Moore reportedly was, herself, a complex mix of elements from her TV characters and her character here. Whether she was channeling darker aspects of her own personality into the Beth character is difficult to say, but Beth's lack of empathy, her inability to give (or receive) affection, her pathological need to be in control of everyone and everything around her is chillingly authentic, a clinically exacting portrayal.

Judd Hirsch, in-between seasons of Taxi, is razor-sharp as Dr. Berger. It's an unrealistically idealized depiction of psychotherapy, with Berger expertly leading Conrad on a path toward self-realization without a single misstep, but it's a flawless performance nonetheless.

Timothy Hutton, son of breezy, likeable actor Jim Hutton, is also very good, mostly because he so accurately captures the angst of ordinary teenagerdom, here compounded exponentially by tragedy and unresolved family conflict that completely overwhelms. It's the kind of character that wouldn't ring truth without total commitment to the character, and Hutton delivers. A baby-faced Elizabeth McGovern, as a high school girl attracted to Conrad, and Manoff are also excellent in their supporting parts.

Redford, aided by John Bailey's cinematography and the effective use of Pachelbel's Canon, which the film re-popularized, further enhance the picture's effectiveness.

From Paramount, Ordinary People has received a 4K restoration supervised by Robert Redford. The 1.85:1 image is basically flawless, razor-sharp with accurate color. The Dolby Digital TrueHD 2.0 mono audio (also available in Dolby Digital mono in German, Spanish, French, and Japanese, with subtitle options in all of those languages as well) is also letter-perfect. A digital copy is also provided on this region "A" release.

Supplements are limited in number but high in quality. "Swimming in the Rose Garden" is an interview with actor Hutton, while "Feeling is Not Selective" consists of an interview with novelist Judith Guest, positively giddy that her work was adapted so well by Redford. A trailer is also included.

Researching this review, I was reminded that 1980 was an incredible year for Hollywood releases, with Ordinary People joining a list that included Raging Bull, The Elephant Man, The Stunt Man, Coal Miner's Daughter, Melvin and Howard and others. Would Hollywood's big conglomerates release, let alone finance, any films of this type now? I doubt it. We need movies like these more than ever, and the Blu-ray release of Ordinary People serves as a reminder of how rich and insightful American cinema could and should be. A DVD Talk Collectors Series title.