Kino // Unrated // June 14, 2022
List Price: $29.95 [Buy now and save at Amazon]
Review by Stuart Galbraith IV | posted June 8, 2022 | E-mail the Author
Before he became famous as Charlie Chan, Swedish actor Warner Oland had already been playing Asian characters (and other "exotic" types) for years, Chinese and Japanese roles in dozens of silent films as early as 1917. Just prior to commencing his signature part as Charlie Chan, Oland starred as Sax Rohmer's archetypal villain Dr. Fu Manchu in three features, the first two of which are paired in Kino's new Blu-ray double-feature disc: The Mysterious Dr. Fu Manchu (1929) and The Return of Dr. Fu Manchu (1930).

While these early, pre-Code talkies require a bit of an adjustment by the viewer, and their "Yellow Peril" stereotypes are decidedly politically-incorrect, the movies themselves are quite enjoyable if one is able to watch them on their own terms. The video transfers are very good for movies more than 90 years old, and each film is accompanied by an audio commentary track by film historian Tim Lucas. 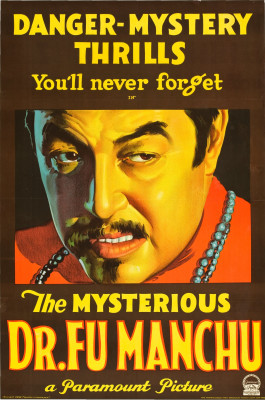 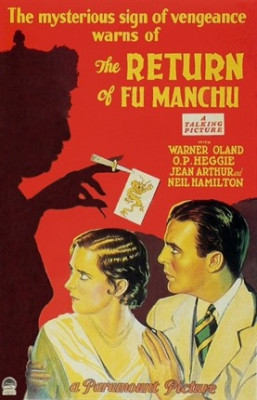 The Mysterious Dr. Fu Manchu is an origin story, though only very loosely based on Rohmer's same-named 1913 novel. During the siege of the foreign legations' compounds at Peking during the height of the Boxer Rebellion -- the same events later dramatized in 55 Days at Peking (1963) -- the Boxers seem poised to overwhelm the greatly outnumbered foreigners, compelling one soldier to have his toddler daughter, Lia Eltham, secretly taken by Chinese servant Li Po (Noble Johnson) to the residence of acclaimed humanitarian-chemist Dr. Fu Manchu (Oland). Fu is happy to accept the frightened child (she seems genuinely terrified in these scenes), but when British relief troops find Boxer assassins firing from the garden walls of Fu's estate, they order the home shelled, and Fu's wife and son are crushed to death under a collapsing wall. Fu vows revenge against the white men who caused this tragedy.

Twenty-some years later, using the hypnotized, now-adult Lia (Jean Arthur) as the instrument of his revenge, Fu begins assassinating officers implicated in the tragedy. Among those targeted is the father and grandfather of handsome physician Dr. Jack Petrie (Neil Hamilton), who quickly falls in love with Lia, unaware that she holds the key to Fu Manchu's vengeance. However, Fu's (eventual) arch-nemesis, Scotland Yard's Inspector Nayland Smith (O.P. Heggie), is already aware of Fu's machinations and hatches a plan to bring him to justice.

The Mysterious Dr. Fu Manchu has many points of interest. I went into the film expecting a creaky early talkie, with the kind of static, stagey camerawork and blocking one associates with the transitional period between silent and sound movies. Instead, the film turned out to be much livelier and more cinematic than most other 1929 releases. Further, this Paramount production was obviously accorded a somewhat larger budget than Oland's later Charlie Chan movies for Fox, which were generally high-end B-pictures. The opening battle scenes are fairly lavish, and the film's last act takes place in a castle dominated by a cavernous set with a positively immense staircase.

Further, while Oland's Fu Manchu visually resembles his Charlie Chan, Oland's approach to those characters are completely different. In the Chan films, Oland was like an Asian Lt. Colombo, outwardly the harmless "oriental" the murderer always underestimates. Chan finds clues through his observations during conversations with frequently and casually racist white suspects that regard him as inferior. And yet, in the Warner Oland Chans anyway, the great detective would often respond with a sly, offhand remark undercutting such insults that only make the white racist appear foolish, yet always Chan remains gentlemanly and polite throughout.

Oland's Chan was inscrutable in one sense, playing his cards very close to his chest, reticent and physically reserved, some of this near-immobility due to Oland's problems with alcohol. His Fu Manchu, on the other hand, is a floridly theatrical villain, given to big, dramatic gesturing. Where Oland's Chan spoke in halting English, carefully choosing his words, his Fu Manchu is positively garrulous, and only slightly accented. It's a performance nothing like, say, Christopher Lee's coldly evil Fu Manchu of the 1960s film series.

It's pointless to quibble about the "yellow-facing" of white actors playing Asian parts, or the picture's stereotypes. (Besides Swede Oland, this film features a Mexican-American, Charles Stevens, and an African-American, Noble Johnson, as Chinese characters. A few minor parts are played by genuine Chinese.) During the 1970s especially, the thought of white actors playing Asians came to be regarded as unconscionable yet without much, if any consideration given to Oland's entirely positive portrayal of Chan (the smartest guy the room, a devoted father, model citizen, etc.) or the fact that Hollywood generally would cast Asians stars popular with American audiences in leading roles when available. Sessue Hayakawa, for instance, had been a huge star of the 1910s and early-‘20s, the first two Charlie Chan movies featured Asian actors as that character, while Anna May Wong played Fu Manchu's daughter in the last of the Warner Oland Fu Manchu films, Daughter of the Dragon (1931), a film that also features Hayakawa.

Jean Arthur was 28 years old when the film was made but already a veteran of nearly four dozen films though, like everyone else, she was relatively new to talkies. She's positively gorgeous and adorable, accentuated by her many costume, hair and makeup changes. Her acting is another matter. She'd quickly improve to become one of the great Hollywood actresses of the 1930s and ‘40s, but in The Mysterious Dr. Fu Manchu it's clear she hasn't yet learned quite how to perform long dialogue scenes, her signature subtlety notably absent.

Neil Hamilton is, of course, best remembered today as Commissioner Gordon on the ‘60s Batman TV series, but in the 1920s and early ‘30s he was a singularly handsome leading man at Paramount. Unlike many top silent era stars, Hamilton was a fine actor who had no difficulty transitioning to talkies. Indeed, his is the best and most naturalistic performance in the film. Amusingly, William Austin, playing Hamilton's (barely) coded gay butler, likewise has a Batman connection, Austin originating the character of Alfred the butler in the first film adaptation, the 1943 serial Batman, his tall, thin, and mustached character influencing the design of Alfred in subsequent comic books.

O.P. Heggie, best remembered today as the blind hermit in Bride of Frankenstein (1935), is fine as Nayland Smith, a leading character in the Fu Manchu novels and all subsequent films, but a lesser supporting character here, though typically clever and resourceful.

An enjoyable follow-up, The Return of Dr. Fu Manchu is much less talky, though it lacks the freshness of the first entry. It is, however, a very direct sequel, its story beginning a few days after the end of Mysterious and featuring the original cast, even in some minor parts. The opening scenes are the best in the film: A lavish Chinese funeral is held for Fu Manchu, where Nayland Smith (again, O.P. Heggie), not entirely satisfied that Fu is no more, views the diabolical Fu (Oland) in his coffin before it is buried. (In a nice touch, the blood-spattered dragon tapestry so prominent in the first film drapes Fu's coffin.) But, ah-HA! -- Fu Manchu is alive and well, slipping out of the coffin through a secret panel, having painted his face with wax to convince Smith and others, disappearing after the funeral to continue wreaking his vengeance.

On their wedding day, Lia and Jack (Jean Arthur and Neil Hamilton again) Fu turns up at their wedding, hiding in the confessional (apparently), and frightening to death Fai Lu (Evelyn Selbie, also in Mysterious), once Fu's servant but now allied with Lia. Through Fai Lu, Fu again marks Jack for death.

Though the sequel focuses more on the rivalry of Fu Manchu and Nayland Smith, virtually the entire cast of Mysterious reprise their original roles, including William Austin's butler (even more prissy here, in unfunny comedy relief) and even Jack's hound, Phyllis. The film is much less talky, probably a reaction to audiences tiring of the talkiness of movies from the 1928-29 period as much as anything. That, combined with a greater emphasis on action, significantly reduces Jean Arthur's and Neil Hamilton's screentime and dialogue, though we see enough of Arthur to note their acting has already improved some.

Like its predecessor, The Return of Dr. Fu Manchu exhibits some early-talkie primitiveness, but on its own terms is still quite enjoyable, and production values remain high.

Licensed from Universal, The Mysterious Dr. Fu Manchu and The Return of Dr. Fu Manchu look great considering their age, comparable to Blu-rays of the earliest Universal horror titles that debuted soon after these pictures. The (DTS-HD Master Audio mono) audio on Mysterious has technological limitations inherit in the original film, with some of the dialogue a bit hard to discern at times (the optional English subtitles come in handy here), but only in a few scenes. By the time Return of was made, sound recording technology had obviously improved dramatically in a very short period of time and the picture has no such issues. Though both exhibit some age-related wear and other minor damage, these region "A" encoded titles hold up astonishingly well.

Tim Lucas provides commentary tracks for both films, and they are expectedly thorough and insightful, including much discussion on the stories' literary origins. These kind of exhaustively researched, carefully considered commentary tracks are increasingly rare as commentary tracks themselves become more commonplace, so it's refreshing to hear tracks as well made as these are.

More general audiences, and probably even some hardcore genre fans, may find The Mysterious Dr. Fu Manchu and The Return of Dr. Fu Manchu difficult to sit through, but when viewed with an only slightly altered perspective they can be enormous fun. Highly Recommended.