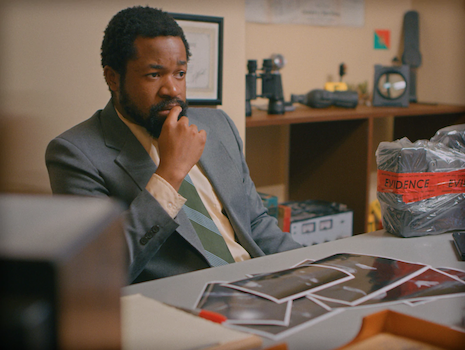 The cozy '70s detective show Columbo made a comeback of sorts during the 2020 pandemic lockdown when folks needed comfort-food TV to binge. Buoyed by the gruff charisma of Peter Falk, Columbo succeeds despite consistently robbing its whodunit plot of surprise: we are shown the murder up top and then made to guess when Falk's trenchcoat-wearing detective will catch up to what we already know.

The 2020 spoof Inspector Ike should delight Columbo fans (newly converted and long-standing alike) by giving '70s TV mysteries the Police Squad/Gareth Marenghi's Darkplace/The Spoils of Babylon treatment. Inspector Ike apes the tone, the style, and even the structure of a Columbo-era TV movie. This kind of parody can be hard to sustain at feature length, but director/co-writer Graham Mason's approach is economical and inventive. The delight is never diluted.

Of course, we at home know that the culprit is Chip's understudy Harry Newcombe (Matt Barats). We saw Harry set up his alibi by bringing his wife Jan (Grace Rex) to an eight-hour play. We saw Harry goad Jan to drink warm milk and eat turkey, ensuring her impending slumber. With Jan out cold, Harry meets with Chip to videotape an "audition," that Harry will manipulate to become Chip's de facto suicide note. Then Harry does the deed and slips back into the theater just as the eight-hour play reaches it close.

From there, Ike's investigation becomes a fairly familiar game of cat and mouse between the Inspector and Harry. Matt Barats, who has a look and attitude reminiscent of Community's Joel McHale, is a great high-strung foil to Ufomadu's low-key energy. In one of their back-and-forths, Ike starts to ask Harry how guilty he is on a scale from 1 to 10. Without waiting for the full question, Harry insists, "10!" "With 10 being the most guilty," Ike clarifies. Harry backpedals and says, "1!" But Ike is clearly unconvinced.

To its credit, Inspector Ike cares about its story enough to build in some surprising and tense plotting. Jan's slow realization that she is an unwitting accomplice to her husband's plan leads to a genuinely menacing scene between them. The film, however, diffuses the tension with the absurd intrusion of Inspector Ike and two bags of groceries. He offers to slow-cook chili for them and the recipe is described in depth for the viewer. (In the vein of Polyester's audience-participation Odorama cards, the Blu-ray comes with an official Inspector Ike recipe card so you can copy down Ike's instructions and make the chili at home.)

The film's climax is similarly silly, but in a way that neatly mocks the trope of the wily detective who improbably (and not quite legally) tricks the killer into admitting their whole murder scheme.

Your mileage may vary for this kind of highly specific genre mockery, but Inspector Ike hits exactly the right mix of smart and stupid without ever straining too hard for a joke or a trope to goof on. Comedy nerds will definitely eat this up like a bowl of slow-cooked chili. 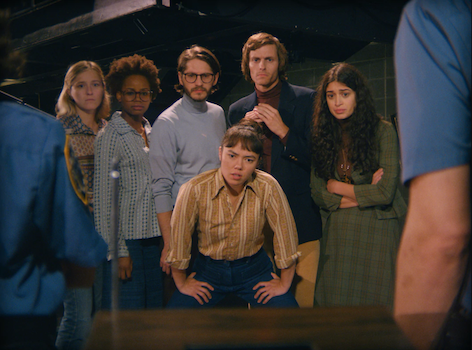 The Blu-ray
The initial pressing of Inspector Ike came with a limited-edition slipcover from the Vinegar Syndrome website, but that edition has already sold out! The standard packaging includes reversible cover art, an official Inspector Ike recipe card, and a booklet including an Inspector Ike "episode guide," an essay by Graham Mason, and a word search by Ikechukwu Ufomadu.

The Video:
The flick is presented in a '70s-TV-style AVC-encoded 1080p 1.33:1 presentation. For a low-budget digital production, the show looks quite good. The look is a bit too clean and digital to pass for actual vintage analog TV, but that mild stylistic disconnect comes off as charming and arguably works in the film's favor. No complaints with the encode. A solid presentation.

The Audio:
Likewise, the Dolby Digital 2.0 is designed to take us back to the days of 70s TV. The music by Simon Hanes is particularly evocative of the era without being too on-the-nose and "funny." Dialogue and atmosphere are well-supported. An optional English SDH track is included, but the timing is sometimes out-of-sync with the pace of the dialogue being spoken.

- This track features some good behind-the-scene tidbits, but it's not particularly in-depth.

Final Thoughts:
I'll repeat what I said before because that's a pretty good blurb. Comedy nerds will eat Inspector Ike up like a bowl of slow-cooked chili. Put another way: it's a stupid-smart swipe at the comfortingly ludicrous TV mysteries of yesteryear that had me grinning from ear to ear. Highly Recommended. 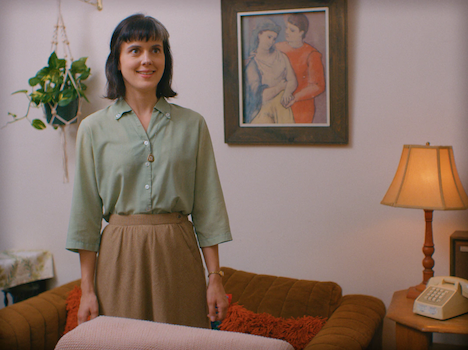