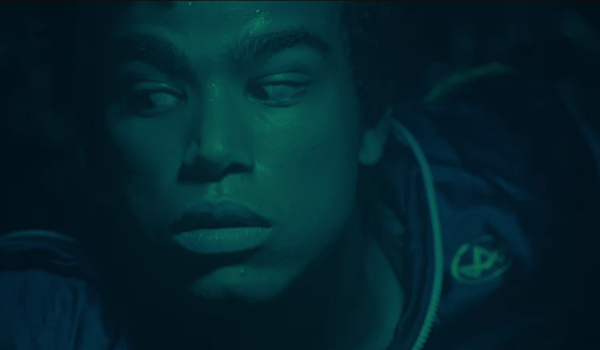 Renata Pinheiro's 2021 Brazilian oddity King Car is an automobile movie with some of the psychosexual energy of Julia Ducournau's Titane, some of the sentient-car sadism of John Carpenter's Christine, and a heaping helping of Cinema Novo-style surrealism.

Lucian Pedro Jr. appears as Uno, a young man who was literally born into the taxi business: his mother gave birth to him in the back of a cab. From a young age, Uno has a special gift that allows him to telepathically talk to one of his dad's cars. When the car makes a choice to save Uno's life while sacrificing the life of his mother in a car collision, Uno decides to leave the life of cars behind.

But the thing is, when you're essentially the Dr. Dolittle for automobiles, you can't just go into sustainable agriculture and call it a day. Teenage Uno reconnects with the car he befriended in his childhood and, with the help of his somewhat-mad inventor-mechanic uncle Zé (Matheus Nachtergaele, putting out some serious Jack Black energy), Uno is able to revive and improve the old car. He dubs the result "Carro Rei," or King Car.

One of the improvements is that King Car is given a computerized voicebox (performed by Tavinho Teixeira), so everyone can hear his thoughts. This gives King Car the power to seduce, too. He starts off with Zé's performance artist girlfriend Mercedes (Jules Elting), leading to the year's second setpiece in which a lady somehow bangs a car (after the aformentioned Titane). But Carro Rei begins to proselytize to others to join his politico-religious King Car cult.

The film gets crazy messy at this point. King Car's followers not only bring in discarded old cars to be upgraded in his image, but they start drinking some sort of Gatorade-looking lubricant that makes them act like automatons. Uncle Zé concocts a computerized harmonica that allows him to talk to cars like his nephew. Uno's affection for a young environmentalist, Amora (Clara Pinheiro), puts her and her agri-comrades right in the cross-hairs of the newly empowered and self-sufficient King Car fleet.

Tracking any political metaphors beyond the most obvious "crypto-fascism is bad" message becomes a fool's errand. Maybe that's all that really needs to come through anyway. For a film interested in teasing out notions of the ways that humans and machines can be combined (and already are), King Car is a little too broad and intellectual to fully carry out its intentions. A strong emotional component would have helped. However, King Car has enough visual ingenuity and crackpot narrative concepts to surprise and engage even the most hardened cult film fan and, for that viewer, it comes recommended.

The Blu-ray
King Car is packaged with double-sided art. A limited edition slipcover is available when purchased from the Vinegar Syndrome website.

The Video:
This film was shot digitally and the AVC-encoded 1080p 2.35:1 presentation looks like a faithful reproduction. Colors are strong and details are crisp, with no noticeable noise or banding.

The Audio:
The main audio option is Portuguese DTS-HD MA 5.1 surround (with optional English subtitles). Lossy Dolby 5.1 surround and Dolby 2.0 stereo options are also offered. The main presentation is well-presented, with some idiosyncratic design touches but a supportive ambience overall. Dialogue, effects, and music are all well-delineated.


Final Thoughts:
King Car is a head trip, chock full of bizarre visual ideas and outlandish satire. You might recognize some of the elements here, but you've honestly never seen anything put together like this. Recommended.