Tales of Hoffman (Criterion), The

It came as a bit of a shock to learn that Orson Welles detested the movies of Michael Powell and Emeric Pressburger (as told to Henry Jaglom in My Lunches with Orson). You'd think if any American filmmaker would appreciate the artistry of this producer-writer-director powerhouse duo, it would be Welles. Why he disliked their work so much I cannot say, but I have a hunch Welles' distaste might have stemmed from the team's "composed" films: The Red Shoes (1948), The Tales of Hoffman (1951), and Oh…Rosalinda!! (1955).

During the 1940s and ‘50s, a handful of very talented filmmakers tried fusing the classical arts with cinema. Walt Disney famously attempted a merging of classical music and animation with Fantasia (1940), while Gene Kelly merged classical dance in films like Vincente Minnelli's An American in Paris (1951) and especially the Kelly-directed Invitation to the Dance (1956). Those attempts were marred by folksy commercial compromises to mass appeal and frequent Technicolor gaudiness when they weren't outright tacky.

And yet…I can understand Welles's aversion to these composed films, if that's indeed what it was. Powell and Pressburger's A Matter of Life and Death (1946) and Black Narcissus (1947) are among this reviewer's personal favorites, movies I watch again and again every few years. Many other films by them vary from uniquely excellent to masterpieces: One of Our Aircraft Is Missing (1942), I Know Where I'm Going! (1945), The Small Black Room (1949) also are personal favorites, as are their less-appreciated later collaborations The Battle of the River Plate (1956) and Ill Met by Moonlight (1957).

So why then, even while dazzled by the cinematography and filmmaking ingenuity, do The Red Shoes and The Tales of Hoffman leave me feeling, well…not much of anything, certainly nothing like the exhilaration accompanying their other best films? (Oh…Rosalinda!! is mildly interesting but a real chore to sit through, at least for me.) Criterion's new Blu-ray is a dazzling restoration that has restored seven minutes of previously cut footage. 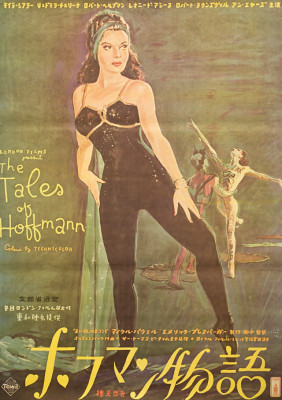 The film is a comic opera - light on the comic - based on Jacques Offenbach's 1881 same-named work, itself adapted from stories by E.T.A. Hoffman. The film has no spoken dialogue, and the opera itself has been translated into English, though I found the optional subtitles helpful in better catching and appreciating the lyrics. Only Robert Rounseville and Ann Ayars both act and sing their parts; all of the other actors and dancers are dubbed by opera veterans.

During a performance of The Ballet of the Enchanted Butterfly with prima ballerina Stella (Moira Shearer), while Hoffman (Rounseville) watches from the orchestra seats, Councilor Lindorf (Robert Helpmann) intercepts a love note from Stella intended for Hoffman. Not having received it, during the intermission Hoffman instead wanders into an adjacent tavern where, increasingly drunk, regales the pub-goers with three stories about his tragic past loves.

In the first, set in Paris, he falls in love Olympia (also Shearer), created by inventor Spanlanzani (Léonide Massine) and magical spectacle-maker Coppelius (also Helpmann), Hoffman unaware that she's an automaton. The second segment finds Hoffman in Venice, where courtesan Giulietta (Ludmilla Tchérina) seduces him into surrendering his own reflection on behalf of scheming magician Dapertutto (Helpmann again). In the third segment, set in Greece, Hoffman loves a soprano named Antonia (Ann Ayars), whom the evil Dr. Miracle (Helpmann) forces to sing against her doctor's advice.

On one hand, The Tales of Hoffman dazzles. As with Red Shoes, Black Narcissus and other Powell-Pressburger films, the use of color is extraordinary. Everything is hyper-stylized from the frequently abstract sets to Helpmann's outrageously bushy eyebrows in one of the tales. Throughout, Powell and Pressburger infuse the film with purely cinematic trickery that would have been impossible on the stage, a famous example being the disassembling of automaton Olympia at the climax of that tale, cleverly staged and edited together so as to be genuinely unsettling and darkly comic.

The Criterion disc emphasizes the influence the film had on director Martin Scorsese but also, unexpectedly, Zombie movie master George Romero, but there are other clearly direct yet less obvious lines to other films. Helpmann, again playing a heavily made-up archetypal villain, turned up in the much maligned Chitty Chitty Bang Bang (1968), which, like Tales of Hoffman, featured (what at least appears to be) a life-like dancing female automaton.

Call me a Philistine, but I think for all of Helpmann's elaborate make-ups in Hoffman, he's far more imposing as the child-catcher in Chitty Chitty Bang Bang which, further, makes better use of his dancer's grace. In Hoffman his characters are tastefully done and beautifully photographed, but in the later musical he's unforgettable, no matter one's opinion of that film as a whole.

I think part of the problem I have with Tales of Hoffman is that it's trying to achieve something nearly impossible from the outset. No matter how cinematic, it can't help but lose the intimacy and immediacy of a live performance of an opera or ballet. And in sharp contrast to other Powell-Pressburger films, it lacks the enveloping, immersive quality of classics like A Matter of Life and Death and Black Narcissus. To use the former as one example, the pair could through their cinematic artistry capture the intimacy and crazy instant-romance of doomed flyer David Niven talking with radio operator Kim Hunter; or convince the viewer through its matte paintings, cinematography, and set design, that nun Deborah Kerr wasn't on a soundstage in England but deep in the Himalayas, so much so one can almost feel its soul-crushing wind.

The episodic nature of Hoffman and star Robert Rounseville don't help. Rounseville has an impressive set of pipes and he's okay as an actor on the screen, but he's like the British equivalent of Howard Keel, a fine singer and decent actor but lacking charisma. We never care much for his characters, or for his various partners in love. Gorgeous as it is, Tales of Hoffman has none of the emotional impact of, say, Jacques Demy's The Umbrellas of Cherbourg (1964), nor is it as satisfying as the 1983 film of the also heavily-stylized The Pirates of the Penzance.

Ultimately, while opera fans might adore The Tales of Hoffman, I suspect many of the rest of us feel like we're being spoon-fed High Art, home video "eat your vegetables" along with dessert. On one hand, each time I see Hoffman I find new things to admire in every scene; in this high-def restoration, I found myself dazzled by the careful design of the candles, for cryin' out loud. But instead of feeling exhilarated at the end, I simply felt exhausted.

Criterion's Blu-ray of The Tales of Hoffman is drawn from a 4K restoration of the original (black-and-white) nitrate Technicolor negatives, with 35mm separation positives for the previously lost footage, mostly consisting of the opening of the Antonia segment and a long curtain call at the end (which includes the opera stars that dubbed most of the performers). An intermission break is also included. What can one say? The video transfer is perfection. The mono soundtrack was also restored using a 35mm positive element. As noted above, optional English subtitles are included, and the disc is Region "A" encoded.

Every Powell-Pressburger film is a must-see, and Criterion's restored The Tales of Hoffman is no exception. As a movie, though…. Still, a DVD Talk Collector's Series title.