What in the hell did I just watch?! Somehow I never caught Grease 2 before June 25, 2022, when I grabbed the disc from its nifty SteelBook packaging, slid it into my Xbox and hit play. I will proudly go on record and say I am a big fan of Grease, Randal Kleiser's 1978 film based on the 1971 musical and starring John Travolta and Olivia Newton-John. I was introduced to the original as a child - well before I understood some of the raunchier jokes - and can still recite much of the dialogue and song lyrics from memory. That film has memorable characters, catchy songs, colorful set pieces and an overall sense of fun. Grease 2, well, it tries to both copy and outdo its predecessor to very mixed results. That it is considered a campy favorite at this point is not surprising; some of the song-and-dance numbers are downright bizarre. Its characters are flat, plot mostly nonsensical and impact is minimal, but Grease 2 is oddly appealing as trash cinema. Most notable for featuring Michelle Pfeiffer's first starring role, Grease 2 is an odd property.

The kids go back, back to school at Rydell High two years after the original film. Principal McGee (Eve Arden), secretary Blanche (Dody Goodman) and Coach Calhoun (Sid Caesar) are still employed. Pfeiffer plays Stephanie Zinone, the new leader of the Pink Ladies, who has recently outgrown her relationship to T-Birds leader Johnny Nogerelli (Adrian Zmed). English transfer student Michael Carrington (Maxwell Caulfield) arrives in the United States and becomes infatuated with Stephanie after she kisses him at a bowling alley to spite Johnny. When he asks her out, Stephanie tells him she is looking for a motorcycle guy, a greaser, and he does not fit the type. Michael starts writing term papers for the T-Birds to earn the cash to buy a bike, while Johnny and fellow T-Birds Goose (Christopher McDonald), Louis (Peter Frechette) and Davey (Leif Green) focus on getting laid. The new Pink Ladies include Sharon (Maureen Teefy), Paulette (Lorna Luft) and Rhonda (Alison Price), as well as aspiring junior member Dolores (Pamela Segall). Other returning characters include Frenchy (Didi Conn), who has returned to get her degree, Eugene (Eddie Deezen) and Craterface (Dennis C. Stewart).

After the massive financial success of Grease, a sequel was inevitable. Unfortunately for Paramount, most of the principal cast declined to come back, leaving returning producers Robert Stigwood and Allan Carr with a few scraps like Conn and Arden, a new director in choreographer Patricia Birch, and a mostly fresh cast. Where Bronte Woodard found great success adapting the musical to screen, writer Ken Finkleman creates a bizarre patchwork quilt of throwbacks and camp here. Grease 2 wants to be the original, but it also goes over the top with oddly elaborate sets, distinctly non-subtle sexual humor, and an occasional mean spirit. The plot is literally the same as before, except the straitlaced protagonist is now a male. It takes zero brain cells to understand that the entire movie is going to be Michael trying to win the affection of Stephanie. Caulfield is a handsome guy but not much of an actor here, while Pfeiffer is beautiful and energetic but appears almost preoccupied in several scenes. The rest of the Pink Ladies and T-Birds are fine, if unmemorable, but Zmed's Johnny is just annoying.

Now the original film certainly had some double-entendres and risky humor, but it handled this with tongue-and-cheek wit. Grease 2 decides to lay it all on the dance floor with stupid musical numbers like "Score Tonight" and "Reproduction," the latter of which is pretty icky considering it involves a substitute teacher and a biology class of minors singing about sex. Nevertheless, it is better than some of the other songs that spring from nothing, including "Charades" and "Who's that Guy," which follows the ridiculous reveal of Michael as the Cool Rider with leather jacket and googles that Stephanie somehow does not recognize. I will give it to Birch, she choreographs some ludicrously over the top numbers, which put the original's "Born to Hand Jive" to shame. What in the hell are high-school kids doing having a graduation luau where Stephanie and Johnny are carried in on the backs of their half-naked classmates? Honestly, this may be one of the best or worst musicals of all time, depending on your perspective. I am not totally sure how to judge Grease 2. Looking at it as purely a sequel to the original, it is crap. But as its own bizarre, colorful charade, it is actually OK. Proceed as you wish.

Paramount offers a 2.35:1/1080p/AVC-encoded transfer for the film. This is fairly good presentation, complete with strong fine-object detail and texture. The colorful costumes and sets are represented well; highlights and skin tones are kept in check; and black levels and shadow detail are good. There are some softer focus shots and a few scenes where colors appear slightly dull, but wide shots are crisp and deep. There may have been some very light noise reduction used here, but overall the grain structure is fluid.

The 5.1 Dolby TrueHD soundtrack is decent but not near reference quality. It is mastered at a lower volume, but once I adjusted my receiver I enjoyed the immersive musical numbers. Dialogue is clear and neither distortion nor crowding is ever an issue. The action remains mostly in the front and center channels, though there is some light LFE response during songs. There are a host of dub tracks and subtitles included, too. 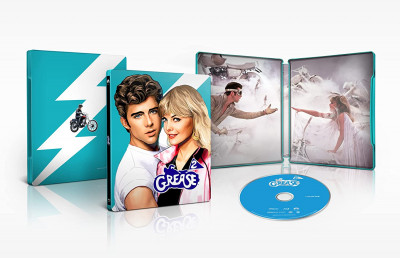 This single-disc release arrives in attractive SteelBook packaging. There are no extras but a digital copy code is included.

Either really bad or quite good campy entertainment, depending on your perspective, Grease 2 is an odd property. This sequel to the 1978 original offers Michelle Pfeiffer's first starring performance, some over-the-top sets, mostly bland characters, and bizarre song and dance numbers. Recommended for the curious.