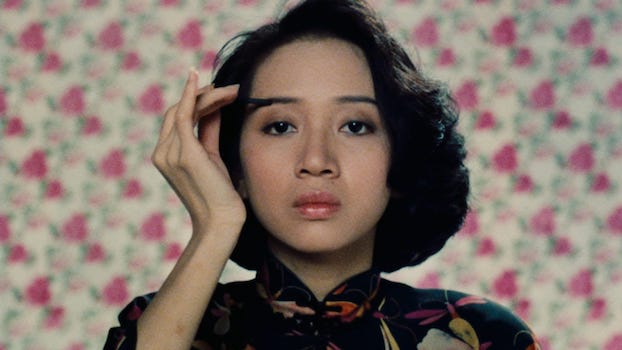 Originally released in 1987, Rouge is the third film from Hong Kong filmmaker Stanley Kwan (Center Stage). It's a love story that is swooningly romantic at first blush but Rouge leaves a decidedly unsentimental aftertaste.

Anita Mui stars as Fleur, a 1930's courtesan with a quiet grace and elegance that catches the eye of middle-class playboy Chan Chen-Peng (Leslie Cheung). Their romance is sensually wrought in teasing close-ups and fluid tracking shots. Chen-Peng (often referred to as "Twelfth Master" due to his family rank) is bold with Fleur but her experience gives her the subtle upper hand. This dynamic is perfectly captured in a moment where Twelfth Master brings his face insinuatingly close to Fleur's face and, without blinking, she flatly asserts that she can't see him from this distance.

After the viewer has spent around twenty minutes in the 1930's, the film jumps roughly fifty years ahead without warning. We are in the classifieds office of a Hong Kong newspaper near to closing time. Fleur, looking exactly the same as we have seen her, asks to place a classified ad to reconnect with a missing person. The newspaper man, Yuen-Ting (Alex Man), tells her to come back with money the next day. But Fleur follows Yuen-Ting on his journey home. They get to talking, and Yuen-Ting is horrified by the inevitable revelation that Fleur is a ghost.

In a few days, it will be the anniversary of the night that Fleur and Twelfth Master committed suicide together. Fleur has come back from Hell to find Twelfth Master because they have not reconnected in the afterlife, and she wants to see if his spirit is still kicking around the land of the living. After the shock wears off, Yuen-Ting sympathetically gives Fleur a place to stay. In a sequence that feels decidedly '80s, Yuen-Ting's girlfriend Ah Chor (Emily Chu) comes home and demands proof that Fleur is a ghost and not just some floozy her boyfriend picked up. (The lack of a heartbeat does the trick.)

The film continues to jump back and forth between the 1930's and 1980's, filling in moments and details from Fleur and Twelfth Master's love story. Unsurprisingly, his family is determined not to accept her, especially after she encourages him to become an actor in the local Peking opera troupe. Yuen-Ting and Ah Chor try to dig up old newspaper clippings to shed any new light on what happened to these two, which also has them contemplating their own relationship. They ponder whether they would commit suicide over their love and quietly conclude that they probably wouldn't.

Anita Mui was a pop star better known for tackling light comic roles, but Rouge makes her a gloriously tragic heroine that is realized both in look and performance with exquisite taste and restraint. Both she and Leslie Cheung expertly reveal the pain, fear, and sadness of their characters without really dropping the facades those characters are constantly projecting. Cheung's character has sculpted the image of a passionate bad boy, but the film gradually reveals the cowardice he masks with all of his "bold" moves.

Rouge is only the second film I've seen by Stanley Kwan (after the aforementioned Center Stage), but one can feel the director's interest in how men and women perform their "roles" as men and women both in society and in art as distinctly here as in the later, more explicitly meta Center Stage. There's a lushness of color and design that will remind many of Wong Kar-Wai's films, but there's a simultaneous pinprick to slightly deflate the artifice that is purely Kwan's. Rouge is a love story that wants to believe in magic but can't help being a little skeptical. 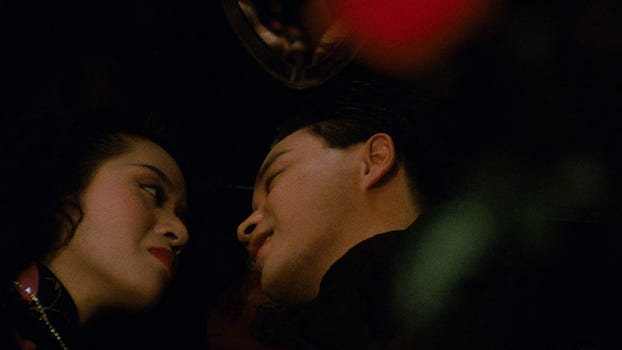 The Blu-ray
Rouge comes packaged with a fold-out featuring an essay by Dennis Lim.

The Video:
This AVC-encoded 1080p 1.85:1 presentation is sourced from a new 4K restoration. Colors are rich without tipping over into the realm of unreality. There is a sensual but fairly grounded approach to the cinematography here. As such, the recurrence of heavy film grain feels more organic than disruptive and adds to the presentation's tactility.

The Audio:
Like many Criterion releases, this presentation defaults to the theatrical Cantonese LPCM mono mix (with optional English subtitles). A Cantonese DTS-HD MA 5.1 surround remix is also included. Both are well-preserved with good fidelity. The remix adds more ambience and some immersive effects, but with this kind of thing, I typically prefer the original mix.

(HD, 39:34) - A new discussion between Kwan and his filmmaking student, Sasha Chuk. They touch on his early career working on film sets before exploring Rouge. At the end, they discuss Kwan's love of Yasujiro Ozu, especially his beloved film Tokyo Story.

Final Thoughts:
Fans of sensual period melodramas like In the Mood for Love and Lust, Caution will surely be taken by this offbeat haunted love story. Criterion's package adds on two great nonfiction works by Stanley Kwan. The whole package is Highly Recommended. 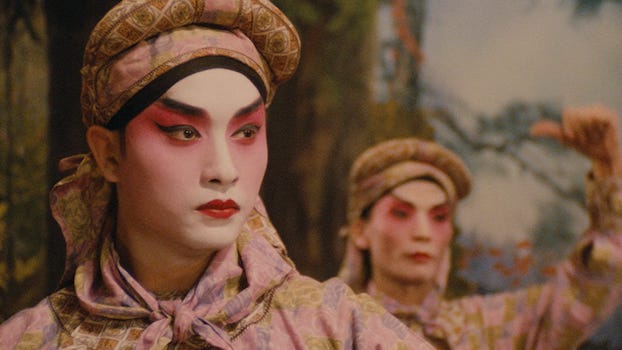