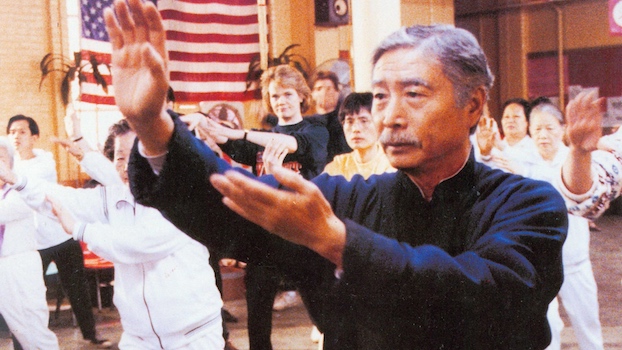 Ang Lee's career has taken a number of odd twists and turns over the years, as he's shifted from indie darling to world-class filmmaker to idiosyncratic technical craftsman. Most viewers looking at Lee's most recently released film, Gemini Man, and his first completed feature, Pushing Hands, would have trouble identifying them as the work of the same director.

Pushing Hands, newly remastered and reissued on Blu-ray, was made several years after Lee had graduated from NYU film school, but one could be forgiven for assuming that this 1991 release was a feature-length thesis project. Pushing Hands is well-made for a low-budget indie, but it is overly studied and awkwardly plotted in a way that speaks to relative inexperience. (Lee's second film, The Wedding Banquet, is a palpable leap forward in terms of confidence and craft.)

This is more than a film history curiosity though. As the first film in Lee's informal "Father Knows Best" trilogy, Pushing Hands boasts a layered and endearing lead performance from Sihung Lung (a Taiwanese film pro who returned to play other conservative fathers for The Wedding Banquet and Eat Drink Man Woman). Lung plays Mr. Chu, a tai chi master who has been brought over from China to live with his successful tech executive son (Bo Z. Wang), his son's American novelist wife (Deb Snyder), and the couple's young son (Haan Lee, the director's son) somewhere in the suburban wasteland north of New York City.

The film's opening sequence might be its finest, a little short film that could arguably stand on its own. Mr. Chu methodically goes through a tai chi exercise routine while his son's wife battles with the blank page in the room next door. Lee doles out the details of the geography slowly, giving viewers time to see the little encroachments both of them have on each other's daily life and allowing us to speculate as to what exactly their relationship is.

The meat of the film concerns this mismatch between Mr. Chu and his new surroundings. His son wants him to assimilate and find his place in the American lifestyle, but the old man is far too traditional for that. The son shares some of this stubbornness, as he resists his wife's pleas to upgrade to a larger house so that she and the old man aren't in constant promiximity. Lee's sensitivity and intelligence is already apparent in this film, but sadly his actors (apart from Sihung Lung) struggle to inject the material with the lived-in quality it requires.

The most touching element of the film involves Mr. Chu getting a crush on Mrs. Chen (Wang Lai), the widowed cooking instructor at the Chinese community center. Like a child who pulls on pigtails, Mr. Chu can't simply talk to his crush. Mr. Chu teaches his own tai chi class in the space adjacent to Mrs. Chen, and he impishly forces one of his students into a table of freshly prepared dumplings. Later, he drafts a calligraphy scroll as apology but refuses to admit its romantic significance when his son asks about it.

The film jumps around tonally, from melodrama to indie naturalism to moments of slapstick. This approach might be a concession to the Taiwanese market for which the film was originally created, but it makes investing wholly in the film a little difficult. Unexpectedly, however, some of the broad comedy is the best stuff in the film. Late in the story, a dejected Mr. Chu takes a dishwashing job in New York's Chinatown. His annoying boss fires him, but Mr. Chu refuses to budge from the spot where he is. After Mr. Chu deflects the attempts of all his coworkers, the boss brings in leather-clad thugs and eventually the police to get Mr. Chu out of his kitchen. Sihung Lung plays Mr. Chu in these moments like he's the hero of his own personal kung fu movie, full of weary, grim-faced determination.

Curious viewers will find plenty of little things to appreciate in Pushing Hands, but it's only a whisper of the great filmmaking to come in Ang Lee's career. 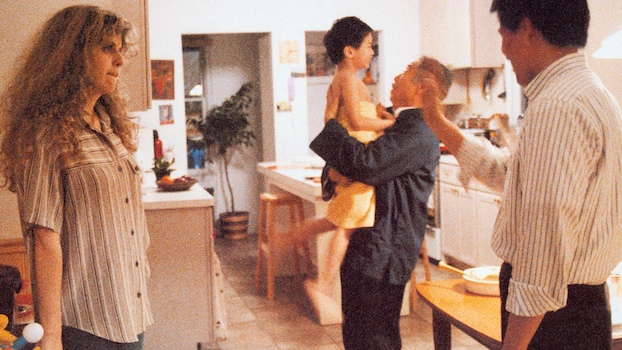 The Blu-ray
Pushing Hands is packaged with a booklet featuring an essay by Zhen Zhang.

The Video:
The AVC-encoded 1080p 1.85:1 presentation is sourced from a new 2K restoration. It looks clean and sharp, but the video image looks oddly brightened. The blacks often look grey-ish, robbing the film image of its inborn contrast.

The Audio:
The Mandarin / English LPCM 2.0 mono audio soundtrack (with optional English subtitles during the Mandarin dialogue only) is well-preserved. Nothing too flashy, but no stark flaws either.

(HD, 1:02:32) - (Actually, Filmmakers Zoom Meeting.) Simon Abrams moderates a discussion with three of Ang Lee's long-time collaborators, writer-producer James Schamus, producer Ted Hope, and editor Tim Squyres. They describe the beginning of their professional partnerships with director Lee, as well as the nuts and bolts of many of their productions together. A lot of practical information and good tidbits. A great discussion.

Final Thoughts:
Ang Lee's first film has lots of little things to enjoy. Sihung Lung is outstanding as a stubbornly traditional Chinese father, unmoored in America. Lee's film is less assured and focused than its lead, but '90s indie enthusiasts will want to give this a look. The hour-long talk with Lee's collaborators might be worth the price of admission. The whole package comes gently Recommended. 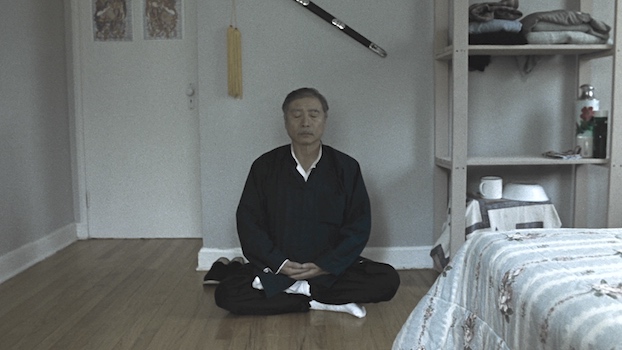