They don't make ‘em like this anymore. The exotic Technicolor adventure films produced by Universal starring Maria Montez and Jon Hall were among its biggest hits of the 1940s, but today, when they're remembered at all, they're mostly regarded as camp classics, particularly Cobra Woman (1944), with thick-accented, Dominican Republic-born Montez as South Seas island priestess Naja performing a somehow-got-it-passed-the-censors phallic snake dance.

Universal at the time was primarily though not strictly a B-movie studio, churning out double-feature fodder for the masses. Even the company's few big stars like Deanna Durbin and Abbott & Costello made films just good enough, rarely given the directors, screenwriters and supporting casts accorded big stars at big studios like MGM, Paramount, and Fox. Montez rose quickly through the ranks after a modest 1940 debut. Clearly, Universal pegged her as the company's answer to Paramount's Dorothy Lamour (among others), and soon after her first leading role in South of Tahiti (1941), a modest potboiler in black-and-white and starring Brian Donlevy, Universal starred her in Arabian Nights (1942), the company's first feature in the three-strip Technicolor process. 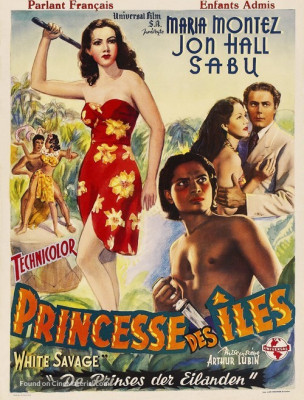 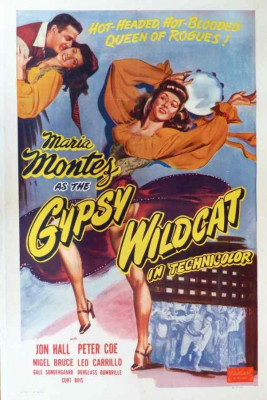 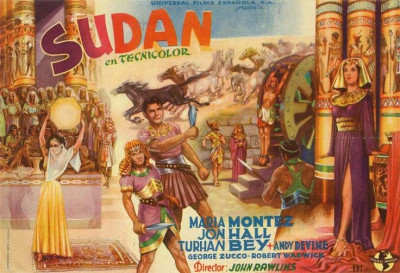 Top-billed in that was Jon Hall, who gained stardom in John Ford's great South Seas epic The Hurricane (1937), co-starring Lamour, with whom he reteamed for Aloma of the South Seas (1941). Third-billed was another veteran of exotic adventure films, the diminutive but energetic Indian actor Sabu, who'd already appeared in movies like The Thief of Bagdad (1940) and Jungle Book (1942). Universal's $900,000 gamble paid off enormously (in 1940s' terms), the movie earning nearly $3.5 million at the box-office.

Universal being Universal, five like-minded follow-ups were churned over the next three years: White Savage (1943), Ali Baba and the Forty Thieves, Cobra Woman, and Gypsy Wildcat (all 1944), and Sudan (1945). All these were in Technicolor, starred Montez and Hall, and either or both Sabu or Turhan Bey.

Watching The Maria Montez-Jon Hall Collection, consisting of White Savage, Gypsy Wildcat< and Sudan, these films play more like interesting Hollywood artifacts than entertaining movies. Their appeal then was obvious: they offered a complete escape from the realities of the Second World War (and often reality itself), with exotic locales of which people in the sticks that nixed hick pix likely had only the vaguest awareness. When the war ended and movie audiences were exposed to the real settings in things like the Cinerama travelogues and big-scale epics like the Mutiny on the Bounty remake, the vogue for such costume pictures died quickly.

Further, the three films in this set are either much less silly than the likes of Cobra Woman so there's less obvious camp value; and/or Montez is even moderately appealing in them. So, instead, Blu-ray watchers are drawn to other items of interest: the Technicolor lensing, the lavish (by Universal standards) production values, their fun supporting casts and occasional oddball aspects. Nevertheless, even those these films are short compared with A-pictures from other studios, these running about 75 minutes apiece, they seem longer because of their thin plots and cardboard characterizations.

In White Savage, for instance, Hall plays Kaloe, a Tahitian (?) shark fisherman anxious to secure fishing rights to the reefs of Temple Island, a self-contained kingdom ruled by reclusive Princess Tahia (Montez), but she's disenchanted with the nearby "civilized" Port Coral due to German merchant Sam Miller (Thomas Gomez) and his bad influence over Tamara (Turhan Bey), the princess's weak, gambling-addict brother. Miller, meanwhile, is biding his time, waiting for just the right moment to steal the gold and precious gems lining the bottom of the princess's swimming pool (!). After a painful meet-cute between Kaloe and Tahia, Kaloe's friend Orano (Sabu), who seems to get his pal into trouble more than help him, tries to engineer a meeting.

As with nearly all the Montez-Hall pictures, an air of unreality hangs over the production, amusingly so in one sense, but credible it ain't. What can one say about a film that casts hatchet-faced Minerva Urecal as a lovesick south seas island native?

The most interesting thing about White Savage is that the movie might just as well have been titled Charlie Chan in Tahiti as it features Sidney Toler as the very Chan-like Wong, a lawyer who looks, talks, and dresses just like Charlie Chan, and even turns out to be a detective at the end with Chan-like powers of deduction. Toler played Chan in Fox's popular film series from 1938 to 1942, the year the series was dropped. The actor then bought the screen rights to the character and resumed the series in 1944, albeit at Poverty Row company Monogram. In this sense, Toler's role in White Savage very much plays like a warm-up to his resurrection of the character, with the added benefit of seeing him in Technicolor, as all the Chans before and after were in black-and-white.

The film is lavish by Universal standards, with budgets inching close to $1 million apiece. By way of comparison, that same year's In Society, which marked Abbott & Costello's big return to the company after a long absence (due to Costello's health issues) cost $660,000 and Universal's all-star monster romp House of Frankenstein came in at just $350,000. The film boasts big Tahitian-style sets, elaborate matte paintings, and a big, special effects-filled climax done via miniatures (some of which, I believe, later turned up in Universal's Lost City of the Jungle). Dramatically, though, it's awfully rudimentary.

The best of the three, Gypsy Wildcat benefits from better direction from Roy William Neill, the Irish-born director that brought considerable atmosphere to Universal's Sherlock Holmes series with Basil Rathbone, and a screenplay co-written by novelist James M. Cain (Double Indemnity, The Postman Always Rings Twice). It's still a gussied-up B-movie, but eminently more watchable than the other two.

This time out Montez plays gypsy dancer Carla who, unbeknownst to her, is actually the long-lost Countess Orso, heir to the castle currently occupied by the sadistic Tovar (Douglass Dumbrille). As the story opens Tovar has Count Orso assassinated, an arrowing witnessed by king's messenger Michael (Jon Hall). Threatened by Michael and discovery of Carla's identity, Tovar blames the gypsies for the murder, imprisoning them in his castle and hoping to use Michael as the scapegoat for his crimes.

Neill had directed Frankenstein Meets the Wolf Man the year before, and watching Gypsy Wildcat one can get a sense of what that film would have looked like had it been filmed in Technicolor: the same gypsy stagecoaches, props, costumes, and locations are in evidence here (though no Festival of the New Wine and "Faro-la Faro-li," alas). Further connecting to other Neill films, Nigel Bruce turns up as the High Sheriff in the final reel, again playing doddering Dr. Watson in all but name.

The well-cast players include Leo Carrillo as the leader of the gypsies, Gale Sondergaard as his fortune-telling wife, Curt Bois as comedy relief Valdi (his lines sounding like they were written for Sabu), and Peter Coe pinch-hitting for Turan Bey as Hall's romantic rival, a hot-headed gypsy. The huge castle set, exterior and interiors, is impressive, and the story is more engaging while Montez is quite appealing this time, though everything turns on racial stereotypes of Romani people now politically incorrect.

Despite its title, Sudan never once steps foot in that country, taking place instead entirely in Egypt. Indeed, the film seems tinkered with after filming; many of Montez's lines are clumsily relooped in postproduction for no clear reason.

This time she's Naila, Queen of Khemis (and the Nile) after her father, the King, is apparently murdered by revolting slaves led by Herua (Turhan Bey, minus his customary mustache). The real villain, however, is trusted advisor Horadef (George Zucco), who plots with aide Setna (Philip Van Zandt) for control of the kingdom. Horadef has her captured and branded a slave, but she quickly falls in with two agreeable pickpockets, Merab (Jon Hall) and sidekick Nebka (Andy Devine). Andy Devine? Pretty soon, the trio land in Herua's hideaway, she at first unaware that the dashing former slave allegedly murdered her father.

Sloppily directed by John Rawlins, the film has more than its fair share of problems. Montez, while beautiful here*, incongruously wears emphatically 1940s-style hair and make-up, while other cast members look either wildly out of place (Andy Devine?) or merely silly (Zucco and Bey) in unflattering ancient Egyptian garb and hairdos. Captured and enslaved, Naila's forearm is branded with a big "S" which conveniently vanishes later in the story. And why "S?" As in "slave?" And while a form of that letter dates back to the Phoenician alphabet, it didn't take that shape until centuries later.

By this point Montez was quite frustration with the roles she was given (or, rather, playing the same part over and over again), and no wonder.

Kino's Blu-ray of Maria Montez-Jon Hall Collection offers all three short films on a single-disc, but the bitrate doesn't suffer too badly here; all three films look very good-to-excellent in high definition, the transfers possibly drawn from the original black-and-white separations as I noticed no matrix misalignment on any of the three titles. The DTS-HD mono soundtracks are also strong, optional English subtitles are included on this Region "A" encoded disc.

Supplements include trailers for all three titles plus other Montez-Hall films. Phillipa Berry provides audio commentaries for White Savage and Sudan while David Del Valle talks about Gypsy Wildcat. Neither is to this reviewer's taste: Berry's is at least scripted and well-organized, with some interesting observations here and there but, honestly, random sampling of Del Valle's never failed to land in the middle of tangential anecdotes and Dick Cavett-like name-dropping of a type hilariously parodied on SCTV and elsewhere. In a commentary for Gypsy Wildcat, do we really need to hear about Ed Wood's last days? Forry Ackerman's house on Glendower Avenue (no matter that Jon Hall once lived there), etc.?

As movies, these three Maria Montez-Jon Hall films have dated badly, though for classic film fans they can be a lot of fun when viewed with the right frame of mind, and they do look gorgeous in Technicolor. Recommended.

*Near the end, Montez clearly goes bra-less wearing a nearly see-through dress that leaves little to the imagination.