Kino has been doling out Blu-ray discs of older TV-movies for the last few years, most of which have been disappointing, but The UFO Incident (1975) was, for me, a gobsmacking surprise. I was expecting some kind of variation of the speculative "documentaries" about UFOs and other mysteries popular at the time, anticipating a too-literal recreation of an alleged alien abduction in this case. Instead, Hesper Anderson and S. Lee Pogostin's teleplay, from John G. Fuller's book, dramatizes the real-life story of Betty and Barney Hill and their 1961 close encounter with remarkable intelligence and ambiguity, while simultaneously broadening its scope into themes of racial identity, repressed fears stretching back to childhood, physical violation, stress brought on by the Cold War and fear of nuclear annihilation and much more. As Barney and Betty Hill, James Earl Jones and Estelle Parsons are outstanding, as is Barnard Hughes in what essentially is a three-character piece. The teleplay has an unusually complex structure for a TV-movie, and Richard A. Colla's direction is intelligent and imaginative, capitalizing on the excellent script and performances. Though clearly prompted into production by its exploitative qualities, the end result is so superior it's almost as groundbreaking as it is startling. 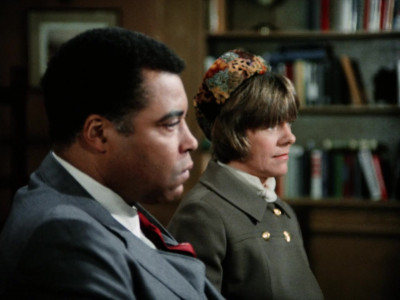 Though an interracial couple at a time when such marriages were still illegal in many U.S. States, Betty and Barney Hill - she a social worker and he an employee of the U.S. Post Office, intelligent, educated people active in their Unitarian Church, the civil rights movement, and the NAACP - are otherwise ordinary people, clearly very much in love with one another. However, they are both troubled by unexplainable events that occurred while driving back home to Portsmouth, New Hampshire from a vacation in Montreal. Late in the evening of September 19, 1961, while driving in rural New Hampshire near Lancaster, they see lights in the sky they first assume is a falling star or small commercial airliner, but soon decide it is an unidentified flying object, a flying saucer, and became convinced it's pursuing them.

They groggily returned home around 5:00am, noting odd physical sensations and unexplainable changes to their car, clothes, etc., but with only the vaguest recollections of the hours following between their initial sighting and return home seven hours later. Concerned they might be ridiculed, initially they keep their story to themselves, but the haunting, fragmented memories torment them both, putting strain on their relationship, and seek help from psychiatrist Dr. Benjamin Simon (Barnard Hughes). He eventually hypnotizes them separately, and discovers mostly identical suppressed memories of an alleged alien abduction.

The UFO Incident is admirably ambiguous. As Simon notes late in the story, the Hills could be lying, though he considers this unlikely. Their claims could also be hallucinations, possibly created by Betty through her dreams, which then morphed into false memories she unwittingly passed onto a susceptible Barney, he highly suggestive due to his fragile physical and mental state. It's also possible, Simon theorizes, that the Hills possibly did see an alien craft in the nighttime sky but imagined the rest, or the entire incident could be true, though he considers this improbable. The script and Colla's direction all support this unknowable position: in flashbacks to the incident, the camera never shows us anything other than strange lights, while under hypnosis, Barney's memories reveal primarily shadowing figures in the darkness while Betty's recollections are far more vivid, including clear looks at the aliens and their spacecraft. The movie takes the position that Betty and especially Barney are genuinely tormented trying to suppress and understand what they experienced, and that through their therapy sessions with Simon they each come to genuinely believe it all really happened, but the film gives equal weight to the possibility that all could be persuasive but false memories.

Had The UFO Incident limited its ambitions to just those aspects, the result would have been a compelling television film. However, the writers dig far deeper, exploring how Betty's beliefs might unwittingly have been transferred to Barney. Outwardly the Hills, while profoundly aware of the unusualness of their controversial marriage, carry on like any normal, recently-married couple. Yet in the privacy of their home and in Simon's hypnotherapy sessions, Barney is clearly tormented by fears of racial violence and of being physically violated, fears drummed into his psyche since childhood. He describes growing up in Virginia where armed relatives would sit up all night waiting for a lynch mob that never came. He likens himself to a bunny hiding in some bushes that thought itself safe, unaware that it was being stalked by Barney and a childhood friend, and these memories trigger anxieties leading to multiple ulcers, fear of nuclear annihilation during the Cuban Missile Crisis, and even of being incapacitated by a stroke or other illness.

While Betty is mostly fascinated by her alien encounter, curiously asking them about their world and so forth, for Barney it's more like a repressed racial and sexual assault rolled into one. Upon believing the strange lights in the sky are indeed a flying saucer, he begins to panic, retrieving a gun he's hidden in the trunk of his car (obviously intended to fend off white racists) and gripped with fear to the point of hysteria.

James Earl Jones is genuinely unnerving in these scenes, so clinical is his performance. The dialogue seems to be directly quoting the transcripts of the Hills under hypnosis, and have an authenticity rare in both movies and television. Estelle Parsons, for her part, likewise strikes just the right balance. While Barney painfully relives experiences he truly believes happened to him, Parsons's Betty leaves room for some doubt. Her memories correspond closely to the dreams she recorded in a journal, and have an air of fancy that leaves considerable room for skepticism.

Moreover, it's fascinating how the real-life Betty and Barney and their story resulted in a television film that, despite their provocative ordeal, simultaneously allowed for a drama about an otherwise ordinary interracial married couple. They hold hands, kiss, cuddle in bed, all matter-of-factly, and Jones and Parsons have a very natural chemistry in addition to resembling their real-life counterparts. Norman Lear's The Jeffersons, which debuted that same year, featured a bi-racial couple (white husband, black wife), but their relationship was almost always in the background of that series, supporting characters whose relationship rarely figured into that show's scripts. Despite its alien abduction aspects, The UFO Incident must rank as one of the earliest substantive depictions of an interracial couple, presented more realistically than the handful of "social problem" films then addressing the issue.

Richard A. Colla's direction is up to the level of the script and performances. For instance, he builds unease with background sound effects like the unnaturally loud hum of Dr. Simon's reel-to-reel tape recorder and the ticking of the clock in the Hill's bedroom. Except during Betty's testimony under hypnosis, the UFO is not seen except for colorful lights in a good blending of location and soundstage exterior footage. When Steven Spielberg made Close Encounters the year after The UFO Incident aired, his extra-terrestrials weren't all that much more sophisticated, and mostly obscured by Vilmos Zsigmond's cinematography. Here, they're just realistic enough to be acceptable in 1970s terms; one imagines this telefilm scared the beejesus out of viewers.

Licensed from Universal, Kino's Blu-ray of The UFO Incident is a clean, 1.37:1 2K transfer that retains the unusual freeze-frame device used at the beginning and end of each act of the drama. The DTS-HD Master Audio mono soundtrack is fine, and optional English subtitles are included on this region "A" encoded disc.

Supplements include a good audio commentary by film historian Gary Gerani, but the real startling surprise here is a feature-length extra feature, longer than the TV-movie itself. Gerani's Romantic Mysticism: The Music of Billy Goldenberg runs 102 minutes, built around interviews with the prolific television composer, who died in 2020. Gerani corralled a terrific cross section of talent: fellow composers like Lalo Schifrin and David Shire, actors including Parsons and Norman Lloyd, behind-the-camera talent like producer Dean Hargrove and music scholars such as Reba Wissner and Jon Burlingame. Though a tad overlong, it's an invaluable document and well-placed with this release as Goldenberg's music for The UFO Incident is yet another impressive facet of this fine film.

One of the best TV-movies of the 1970s, and far richer and intelligent than its title and subject matter would suggest, The UFO Incident is a real find, and a DVD Talk Collectors Series title.