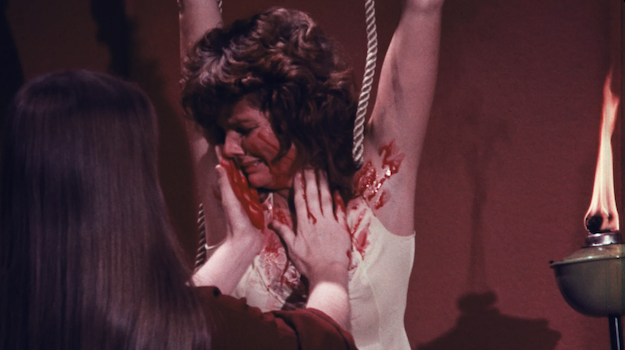 Satan's Children is a strange low-budget exploitation hodgepodge made in Tampa, Florida, in the mid-'70s. Previously released on Blu-ray as the second feature behind Satanis: The Devil's Mass, Satan's Children has now earned it own spotlight release with new bonuses.

It's easy to see why the film is being positioned for rediscovery. Satan's Children has the right mix of unintentional camp lunacy and runtime-padding boredom to hit the sweet spot for vintage bad movie fanatics. One is tempted to peg this regional oddity as a mix of Multiple Maniacs and Manos: The Hands of Fate.

As queer film historian Elizabeth Purchell frames it on the commentary track featured on Something Weird/AGFA's new Blu, Satan's Children is a film that's both explicitly homophobic and implicitly homoerotic. The main character Bobby (Stephen White) is "saved" from the advances of an old cruiser only to be gang-raped by his savior's drinking buddies. Ugly stuff, but it also leads to Bobby spending most of the film's remaining running time in a pair of tighty-whities -- including a LOOOONG sequence where he runs through woods, hoping to evade capture by angry Satanists.

Oh right. This is supposed to be a movie about Satanists. Well, it mostly kinda sorta is. Bobby is found after his brutal assault by a cult of unconvincing Satanists who squabble about whether he can be added to the cult. ("Satan hates losers," Bobby is hilariously informed late in the film.) When they aren't chaining people up or burying them up to their necks in sand as torture, the cult seems like a fairly run-of-the-mill hippie commune. The head of the cult is played by Robert C. Ray II, who has a fantastic moustache. But, glimpsed starting his day with a cup of coffee and the daily paper, he seems more like a young stockbroker than a charismatic cult leader.

The film is bookended by Bobby's troubled home life, which is not unlike Cinderella-meets-stepfamily-porn. Bobby is forced to work by a demanding stepfather and teased sexually by his stepsister. Later, after his ordeal with the Satanists, Bobby turns into Dustin Hoffman in Straw Dogs and starts killing everyone -- to prove to Satan he's not a loser???.

Satan's Children is alternately nasty, silly, and dull -- but boy, is it a fascinating watch. It doesn't come without trigger warnings -- especially the sexual violence stuff -- but there's so much ridiculousness (I didn't even mention the oatmeal quicksand!!) that it truly deserves rediscovery by fans of psychotronic cinema. 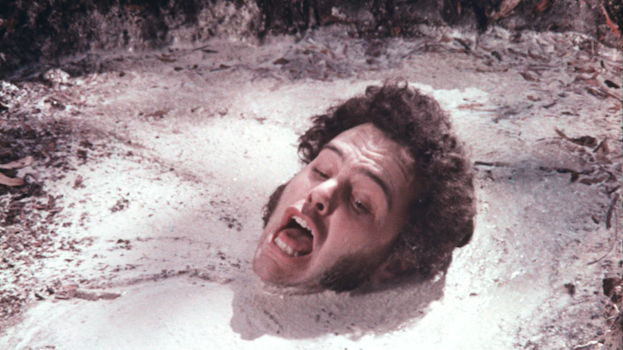 The Blu-ray
Satan's Children is packaged with reversible cover art. A limited edition slipcover featuring the original poster art and a Satanic panic news article about the film is available exclusively on the Vinegar Syndrome website.

The Video:
Credited as a "2K preservation" of the only remaining film elements, this AVC-encoded 1080p 1.85:1 presentation towers above the muddy-brown versions that have floated around Youtube for years. The scan is detailed and organic, with vivid '70s colors. That said, the film image is not without some unrepaired flaws: intermittent scratches, stains, and dirt. Ultimately, for an unsung trash-terpiece, this is still a jaw-dropping revitalization.

The Audio:
The DTS-HD MA 2.0 mono soundtrack is a little more obviously hindered by the original film's low-budget and damage over the years. Fidelity comes and goes, with dialogue mostly being clear but often sounding boxy or crispy. The music performed by local Tampa band Leadfeather isn't quite Goblin but it gives the film more atmosphere than it probably deserves. One subtitle option: English SDH.

- A delightful discussion of the film with queer film historian Purchell and archivist Berg. Chock full of background info and a fondness for this oddity.


Final Thoughts:
Ask yourself something. Are you the type of person to get excited when you hear the phrase "regional exploitation cheapie called Satan's Children?" If so, this movie will make you happy. Additionally, Something Weird and AGFA's collection of complimentary oddities and pitch-perfect commentary track make this a must-own for a weirdo like you. Others may balk, but for you, this comes Highly Recommended. 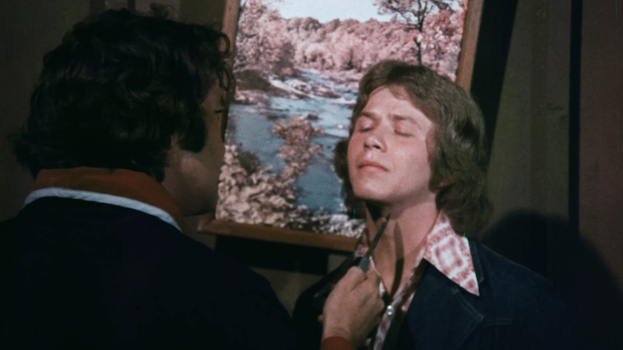