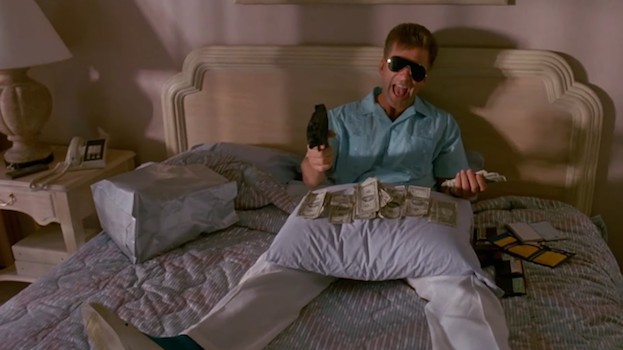 Miami Blues is a dark comic crime movie from 1990 that has consistently flown under the radar, even by the standards of a "cult classic." It stars a young Alec Baldwin on the verge of stardom (his turn as Jack Ryan in The Hunt for Red October hit theaters just before this). It's a Jonathan Demme production that was written and directed by fellow graduate of the Roger Corman "school," George Armitage (Vigilante Force, Grosse Pointe Blank), from the book by Cockfighter novelist Charles Willeford.

The end product bears distinct fingerprints from all of its creative fathers, but with its Tak Fujimoto cinematography and a brief supporting turn from Charles Napier, Miami Blues often feels like the forgotten conclusion to a Demme offbeat-crime trilogy started with Something Wild and Married to the Mob.

Baldwin stars as a live-wire psychopath who goes through many stolen identities during the film's runtime, but mostly sticks with the nickname "Junior." Newly arrived in Miami from a California prison, Baldwin plays Junior like a demented surfer with loopy accent to match. You can't keep a good psycho down, and Junior barely touches down at the Miami airport before unintentionally (?) murdering a Hare Krishna (played by co-producer Ed Saxon) by breaking his finger and sending him into shock. Without looking back, he heads to his motel and procures the services of a sex worker.

You're not gonna believe this, but the gal who shows up at his door is a real sweetie-pie. Jennifer Jason Leigh is Susie, young and naive and hoping to make enough money from hooking to put a down payment on a Burger World franchise. She also has a strange accent, which is presumably supposed to be "Florida white trash," but comes off much more cartoonish than Leigh's comparable twang in The Hateful Eight years later.

Junior is one of those criminal antiheroes who is like a shark, looking for quick scores to get ahead and then looking for the simplest way to move on. He clearly sees the sweet Susie as a mark -- especially once she says she has over $10,000 in savings -- but the film is a bit ambiguous about whether or not he actually falls for her. He suggests they move into their own place, but does he really think he can start over with Susie or is he just keeping an eye on his next score?

In the meanwhile, homicide detective Hoke Moseley (a perfectly disheveled Fred Ward) tracks down Junior to answer for the dead Hare Krishna. Unfortunately, Moseley has underestimated his opponent, who sneak-attacks him and steals his gun, badge, and... false teeth (!).

The film takes maybe a little too long to get to this point, because things really start to cook once Junior impersonates a cop, using Moseley's badge -- shaking down pimps for protection money, robbing muggers and keeping the loot for himself, and intervening during crime scenes. He memorably shoots a would-be robber in the leg then states, "I fired a warning shot... and it hit you."

In the realm of detective stories, Miami Blues leans more toward the shaggy, Inherent Vice-like reliance on atmosphere, style, and character rather than going for a taut procedural or nail-biting cat-and-mouse thriller. Armitage still knows how to twist the screws in a handful of shockingly violent setpieces, the best two being Junior's attempt to stop a convenience store robbery, armed with a jar of spaghetti sauce, and a botched robbery at a pawn shop run by the inimitable Shirley Stoler (The Honeymoon Killers, Below the Belt).

A little funny and a lot weird, Miami Blues is a great early showcase for this cast that will surely hit the spot for fans of Something Wild and Grosse Pointe Blank. 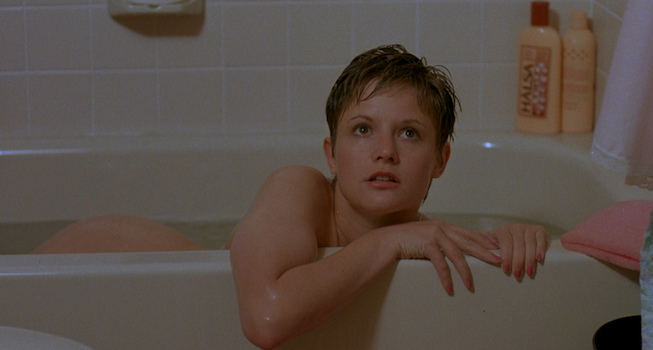 The Blu-ray
MVD's Blu-ray of Miami Blues comes with a mock-VHS-box slipcover, reversible cover art, and a mini-poster of the mock-VHS design.

The Video:
I don't have the 2015 Shout Factory Blu-ray to compare, but I would bet you dollars to donuts that this is simply the same HD master ported over from that release. Strong pastel colors in this AVC-encoded 1080p 1.85:1 presentation and very good detail and depth. Image is mostly stable but lots of specks throughout the film. Reminds me of MGM's master for Love and Death, which hit Blu-ray around the same time as the Shout version of this title and was similarly flecked with specks.

The Audio:
The LPCM 2.0 main soundtrack is pretty robust for its vintage. Dialogue and effects are well-supported and I noticed a surprisingly rich bass response during the music cues and score. Lossy French Dolby 2.0 and Spanish Dolby 2.0 dubs are included. Subtitle options: English SDH, French, Spanish. I watched some of the English subtitle track, and it was sometimes a little out-of-sync and featured some odd typos. Not impossible to follow, but the subs could have used a little last-minute proofreading maybe.

(HD, 26:01) - Ported over from the Shout Factory disc, this is a 2015-vintage piece in which the two leads share their memories of their characters and working on the film. A little too heavy on long film clips (a pet peeve, so your mileage may vary), but a solid featurette.

Final Thoughts:
Give me quirk, give me crime, give me both at the same time and I'm a happy movie reviewer. Highly Recommended. 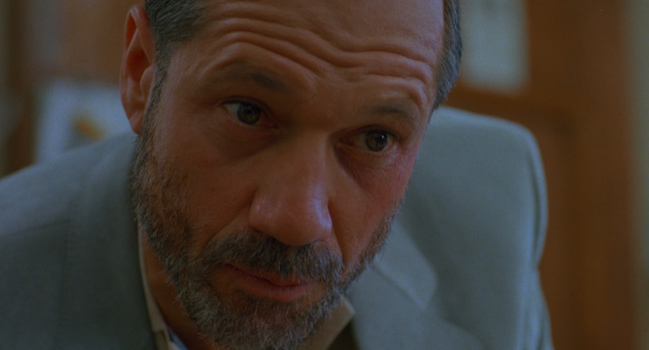