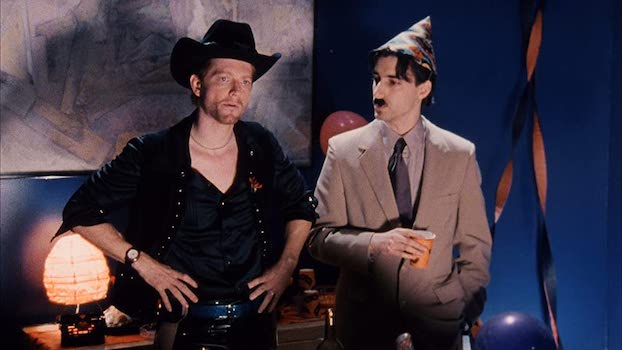 Highball is a fascinating little relic from the late '90s. It was co-conceived and directed by Noah Baumbach, who removed his name from the finished product along with co-writers Carlos Jacott and Christopher Reed (the current home video version has their credits restored). Much like Paul Auster and Wayne Wang's Blue in the Face, which was a largely improvised lark that drafted off the production momentum of the much more polished film Smoke, Highball was shot in a week shortly after the production of Baumbach's Mr. Jealousy. Most of the cast is carried over, although the recognizable actors take a backseat to Baumbach's friends who filled the periphery of the (relatively) bigger film.

There's not really a story here, just a few small character arcs and a bunch of absurd interactions. Diane (Lauren Katz) and Travis (Christopher Reed) throw three different parties in their Brooklyn apartment, gathering their wacky friends and a few big-name (at least, indie-big-name) guests. Each party lasts about 25 minutes onscreen, giving this dippy exercise a thankfully brief 80-minute runtime (the box erroneously states it runs 110 minutes, which would be torture).

The first party, an impromptu birthday gathering for the ungrateful Felix (Carlos Jacott), is unfortunately the weakest section of the film. Katz and Reed as the party hosts err on the side of sketch-comedy broadness which undermines the subtler instincts of certain guests and starts the whole film off on awkward footing. Also, it takes a while to parse that certain name actors -- like Eric Stoltz, Annabella Sciorra, Justine Bateman, and Luna frontman Dean Wareham -- are playing characters, but Ally Sheedy and Rae Dawn Chong pop up as themselves.

The second party is the best at recapturing the snappy rhythm and witty-weird flavor of the group scenes in Baumbach's debut, Kicking and Screaming. It actually got me to laugh out loud a few times, notably at John Lehr and Chris Eigeman as squabbling coworkers who both show up to Halloween in the same giant lizard costume. Baumbach pops up as a character sporting a mustache he doesn't realize makes him look like Hitler, and Peter Bogdanovich haunts the party, rattling off a collection of... somewhat accurate Hollywood star impersonations.

The third party section takes place at New Year's and features some clever tweaks to the characters we have gotten to know It brings the film to a suitable, if shambling, end.

In the Blu-ray bonus features, producer Joel Kastelberg claims that Highball made more money for Lionsgate on home video than Mr. Jealousy did, but one suspects this is due more to the cunning of the Lionsgate marketing department than any other factor. For what it's worth, a lot more of Highball works than a film that was made under such slapdash circumstances probably should. But do I get why Noah Baumbach might be inclined to take his off it? Oh yeah. 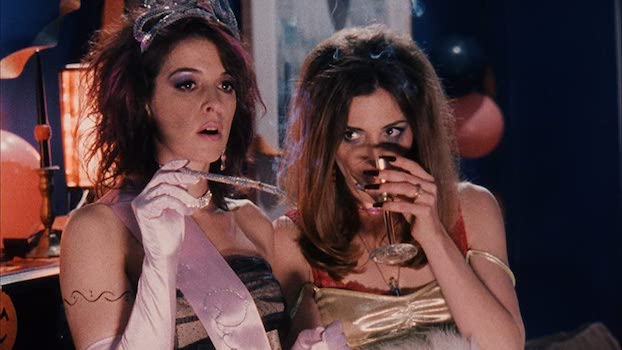 The Video:
A strongly detailed AVC-encoded 1080p 1.78:1 presentation that brings out of the filmic texture and grain of this low-budget production. The cinematography is purely functional and looks more like an awkwardly designed film-school project than the work DP Steven Bernstein did on Mr. Jealousy.

The Audio:
The LPCM 2.0 audio is clean and clear, with dialogue easy to understand. A bit of music to smooth transitions, but this is a pretty meat-and-potatoes mix. Two subtitles options: English SDH and Spanish.

(HD, 1:14:35) - A collection of Zoom interviews with a bunch of the actors, the producer, and the co-writer. Like the film it covers, it's shaggy with some highlights.

Final Thoughts:
As a Baumbach fan, I attempted to watch Highball on Netflix years ago. I gave up about ten minutes in. I wish I would have stuck in there, because there are some good laughs sprinkled throughout this loosely assembled lark. MVD's disc gives it a solid A/V bump. Mild recommendation for Baumbach completists, but most viewers are fine to just Rent It. 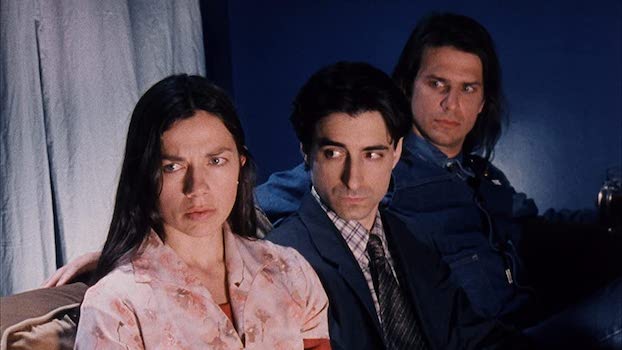