A character-driven comedy-drama based on a true story, The Duke (2020) is a pleasant little film reminiscent of the type of British picture that was commonplace during the story's setting, the early 1960s. Jim Broadbent and Helen Mirren star, with Broadbent in especially fine form. 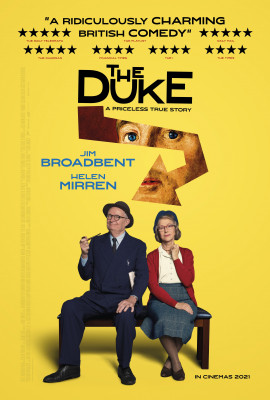 Kempton Bunton (Broadbent) is a 60-ish pensioner living in Newcastle with his wife, Dorothy (Mirren), an elderly housekeeper for a local councilor and his wife. Years before their 18-year-old daughter died in a bicycling accident, Dorothy suppressing her grief to the point of hiding away all photos of her late daughter and refusing to visit her grave. Kempton, meanwhile, drives his wife to distraction with his inability to hold onto a job, his community activism, and his television playwriting, his scripts invariably rejected. Kempton's latest obsession, refusing to pay for a TV license and disabling his set from receiving the BBC (while allowing ITV, the newly-established commercial network) lands him a 13-day prison sentence. On the telly is extensive coverage of Britain's purchase for GBP 140,000 of Goya's portrait of the Duke of Wellington, put on display at the National Gallery. Kempton is outraged taxpayer money was used when pensioners like himself are forced to subsidize the BBC.

After losing his job as a taxi driver, Kempton travels to London for one last-ditch effort to sell his television plays. Returning home, he has in his possession the famed Goya portrait, which with adult son Jackie (Fionn Whitehead) he hides behind a false wall inside a wardrobe. Kempton contacts the government, saying he'll return if Britain's elderly be exempted from TV licensing fees. The government, however, assuming the break-in was the work of a master art thief, dismiss Kempton's letters are the ravings of a crank. When Kempton's dodgy eldest son Kenny (Jack Bandeira) visits with his girlfriend, Pammy (Charlotte Spencer), she finds the painting and tries blackmailing Kempton for a piece of the reward, but he simply returns the painting, prepared to stand trial for his crime.

The real-life disappearance of the painting, missing for four years, was headline news in Britain. The Duke has a charming coda at the very end reminding viewers of its theft, amusingly referenced in a still-famous movie briefly excerpted here. Kempton's subsequent trial was also big news, the outspoken, plain-speaking Kempton impossible to dislike, and hard even to disagree with. His barrister, Jeremy Hutchinson QC (then the husband of actress Peggy Ashcroft), likewise argued in court (the Old Bailey) that since Kempton had no intention of keeping or personally profiting from the portrait, he could not be convicted of actually stealing it. (There's some amusing, real-life legal wrangling in these scenes concerning the portrait's frame, which Kempton did not return.)

Mostly though, what really puts over The Duke is Broadbent's delightful performance, and the portrait of Kempton weaved by screenwriters Richard Bean and Clive Coleman. Kempton is working-class but neither stupid nor uncultured. He reads Chekov and Shakespeare (preferring the former) and his unproduced TV plays may hint at some talent; their themes of grief just aren't appealing in early ‘60s TV terms. Besides his writing, Kempton works through this grief by advocating for the underdog: seniors with limited income, and in one scene he alone comes to the defense of a Indian bread-maker browbeaten by his racist shift supervisor. At the Old Bailey, Kempton wins over the jury, members of the gallery, and even the clerk of the court (Heather Craney) and others with his common-sense defense.

Helen Mirren, for years known for her earthy sensuality in movies like Age of Consent and The Cook, the Thief, His Wife & Her Lover, is intriguingly cast as Dorothy, apparently a fun-loving woman who loved to dance until her daughter's tragic death. Years of self-inflicted suppression and penance followed: she's become a cheap, judgmental charwoman scolding her adult children over their mild use of profanity while unjustly blaming her husband for their child's death.

The film finds an agreeable balance among comedy, drama, character insight, and in telling an amusing, history-based story. It also integrates period footage and uses little snippets of CGI to achieve period verisimilitude without overdoing the visual effects.

Sony's Blu-ray presents The Duke in its original 2.40:1 ‘scope aspect ratio. I'm assuming this was shot digitally, but the sharpness, contrast, color, etc., are all impressive, up to contemporary movie standards, as is the DTS-HD 5.1 mix (originally Dolby Atmos), with subtitle options in English, French, and Spanish.

Supplements are minimal, limited to a making-of featurette less than three minutes long and a trailer. Conversely, there are trailers galore for other Sony Classics titles that the viewer can, thankfully, bypass.

Not a great film but certainly an enjoyable one, pleasingly humanist and character-driven with lots of wit, insight, and an amusing footnote in British history. Recommended.