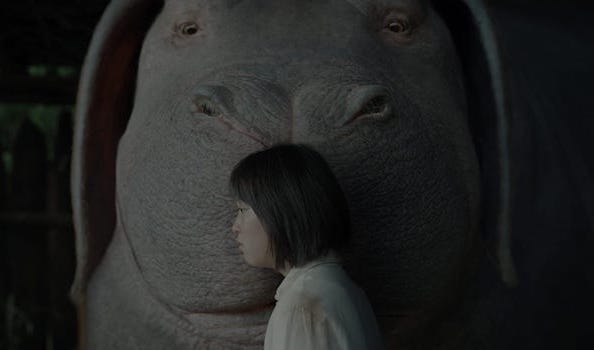 Bong Joon-Ho's Okja could almost pass for a children's film for a long chunk of its runtime. There's a forty-minute section of the film in which tween Mija (An Seo Hyun) hangs out with her giant superpig pal Okja in the enveloping forest near her family's humble mountaintop farm. Thanks to seamlessly rendered digital effects, Okja looks like a living, breathing giant creature that also has the sweetness of a family pet. This section of the film is not without drama -- Okja saves Mija from falling off a cliff at one point -- but it has an idyllic quality that feels almost like a fairy tale.

Well, let's not forget that director Bong is the same filmmaker who wrought the dark comic violence of Snowpiercer and Parasite, so the gentle fairy tale doesn't last. See, Okja is actually part of the Mirando Corporation's plan to mass-produce genetically modified superpigs to boost their meat-based profits. Lucy Mirando (Tilda Swinton), in an effort to turn around the toxic reputation of her family business, cooks up a publicity scheme in which a few "miracle" superpigs are sent around the world to be raised by local farmers. And now, after ten years, the Corporation wants their property -- that is, Okja -- back. First, so they can wrap up the PR stunt, but then... you know... to process Okja and her kin for eating.

Mija is not quick to give up her four-legged friend, so she chases Okja from Korea to America. In the process, Okja demolishes a shopping center with more flair than the Blues Brothers. The tempo shift from the mellow forest scenes to this thrilling wild pig chase is almost neck-snapping.

Paul Dano heads up a chapter of the Animal Liberation Front that intercepts our two heroes and hopes to use Okja as a tool to expose the cruel practices of the Mirando Corporation. While the ALF crew (which also includes Steven Yeun and Lily Collins) are well-meaning, they are woefully naive about the torture they are setting Okja up for. Jake Gyllenhaal plays a scientist and TV personality who seems like a wacky Bill Nye type but is essentially the Dr. Mengele of this animal holocaust.

The performances are part of the problem. Tilda Swinton's highly stylized take on a space-cadet "visionary" leader of a corporation feels like a stale rendering of a trope. Meanwhile, Jake Gyllenhaal is taking a giant swing by playing his character consistently like some kind of demented kid's show host, but it's just not funny.

The final section of the film -- in which Mija attempts to save Okja from a superpig abattoir -- manages to combine action, horror, and heart in a way that feels less like clashing and more like synthesis. There's still a part of me that wonders if the film might have found another way to say what it wanted without turning into a big-budget PETA promo, but it's undeniably effective.

The Blu-ray
The Blu-ray edition of Okja comes packaged with a fold-out essay by Karen Han.

The Video:
For this AVC-encoded 1080p 2.39:1 presentation, there are no complaints. Shot digitally on an Arri Alexa 65, the film downscales to HD quite satisfactorily, with a nuanced color space and strong detail. (One presumes it's even better on the UHD -- ahem! -- but you take the screeners you're given.)

The Audio:
The film is presented in an impeccable Korean & English Dolby Atmos mix (although with my set-up, it comes through as a comparably immersive Dolby TrueHD 7.1 surround mix). Criterion offers either English translation subtitles for the Korean passages or English SDH for the whole film.

(HD, 33:32) - Producer Dooho Choi interviews director Bong about his memories of making the film four years later. Even though Bong jokes that he's forgotten everything, this is a thorough discussion of everything from previsualization to casting actors and assembling the crew to the execution of complicated setpieces. They also talk a little bit about streaming vs. other kinds of distribution.

Final Thoughts:
One hopes that Criterion's partnership with Netflix continues because it is heartening to see the streaming service's more auteurist fare given the deluxe home video treatment. As for the film, it's more scattershot than I was expecting. But there's quite a lot of brilliance here. Well worth a look. Recommended.