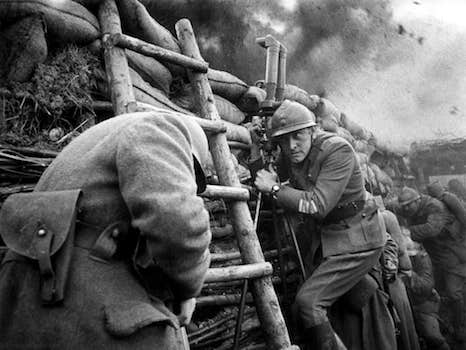 NOTE: The images accompanying this review are taken from various online sources and do not necessarily reflect the quality of the 4K disc being reviewed.

Although Killer's Kiss and The Killing have proven enormously influential in the years since they were released, the 1957 World War I combat drama Paths of Glory is arguably the moment where Stanley Kubrick "leveled up" to become a world-class filmmaker of renown.

If Sam Fuller already took the glamor out of combat in flicks like Fixed Bayonets! -- a key line in that film is "Killing's a business" -- Paths of Glory goes further by demonstrating the cruel banality of war and the middle-manager types who want to make sure that "business" is booming.

Kirk Douglas, who also produced the film through his company Bryna, headlines as Colonel Dax. Dax has the impossible task of sending his 8,000 men out from their entrenched position to take a nearby German stronghold nicknamed "The Anthill." The maneuver was conceived by an out-of-touch career general, Broulard (a perfectly patrician Adolphe Menjou), who dangles the promise of advancement to General Mireau (George Macready), Dax's direct superior.

The visual language that has come to be thought of as Kubrick's signature sees its initial blossoming here. As the immaculately dressed Mireau walks through a trench to feign interest in his men before giving Dax his assignment, the camera tracks with him in stately detachment. It's a Steadicam shot before the advent of Steadicam which makes the fluid work of DP Georg Krause and his crew all the more impressive.

The attempt on the Anthill is the film's visual centerpiece. Douglas leads his troops out of the trench with a whistle stuck in his teeth, but there is no glory -- in intentional subversion of the film's title -- in this maneuver. There is no rousing martial music on the soundtrack, just the bombardment of shells from both sides and rifle fire. Kubrick doesn't cut in for any character moments among the men to break up the oppressive onslaught, he just presents a slow, impossible slog across no man's land. The punchline is that the seemingly impossible task proves to be... truly impossible.

Mireau is embarassed by Dax's men and demands blood. He calls for a court-martial of the men, eventually settling for an arbitrarily selected trio to face charges of cowardice. Dax offers to defend his men, but soon learns that these three will be railroaded to salvage Mireau's vanity. Douglas delivers his character's summation with the perfect blend of acidity and weariness: "There are times when I am ashamed to be a member of the human race, and this is one such occasion."

Ralph Meeker (Kiss Me Deadly), Joe Turkel (The Shining), and infamous wild man Timothy Carey (The Monkees' Head) play the three condemned men. None of them are idealized angels or soulless demons; they're just unfortunate suckers. Paths of Glory is more humanistic than The Killing, Kubrick's previous collaboration with hard-boiled bard Jim Thompson (Little Big Man scripter Calder Willingham is also co-credited with the screenplay), but the film consistently rides the line between bruised idealism and cynicism.

The final scene is arguably one of the most effective non sequiturs in movie history. Colonel Dax peers in on his men getting drunk as a teary-eyed German girl (played by Kubrick's future wife, Christiane Harlan) is dragged out on a stage for their amusement. She starts singing a German folk song that disarms the men and they start humming along. A moment of objectification swiftly mutated into one of human connection. But the mood is not triumphant, it is decidedly still quite melancholy. It's the kind of ending you intuitively understand immediately though it might take years to fully process and explicate. 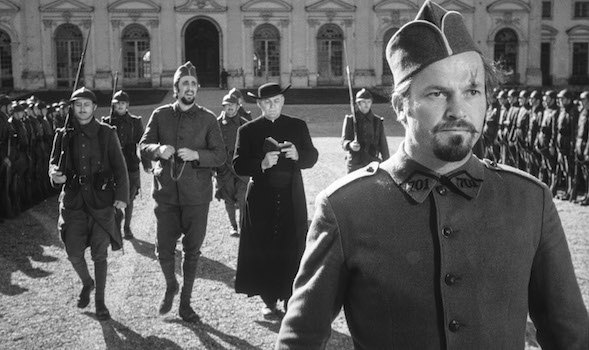 The 4K UHD Blu-ray
Kino's 4K disc of Paths of Glory comes with a slipcover. An informative new commentary is included (see Special Features below), but the breadth of supplements don't compare to the old Criterion disc.

The Video:
The HEVC-encoded 2160p 1.37:1 presentation, complete with Dolby Vision HDR mastering. The picture upgrade is the whole reason for this release, and this new video master is a jaw-dropper. Rich black levels with crisp detail and extremely nuanced contrast. Organic film-like texture but no noticeable dirt or damage to distract. A spot-on transfer.

The Audio:
The DTS-HD MA 2.0 mono soundtrack seems like a faithful, clean reproduction of the original mix. Certain lines of dialogue get a little lost in the on-set recording, but it feels organic to the production. The battle scenes are appropriately overpowering, even if some of the effects sound a little stock. One subtitle option: English SDH.

- The Video Watchdog himself provides a thoroughly researched and entertainingly presented exploration of the film.

Final Thoughts:
Paths of Glory is sometimes underrated within Stanley Kubrick's filmography, but it is arguably one of his most powerful efforts. The 4K UHD disc delivers a gorgeous and rich new transfer that is good enough to make the argument for the format on its own. If only those old Criterion extras had found their way over to this release, this would be a no-brainer Collector Series title. But for the wildly impressive visual upgrade, this release comes ecstatically, Highly Recommended. 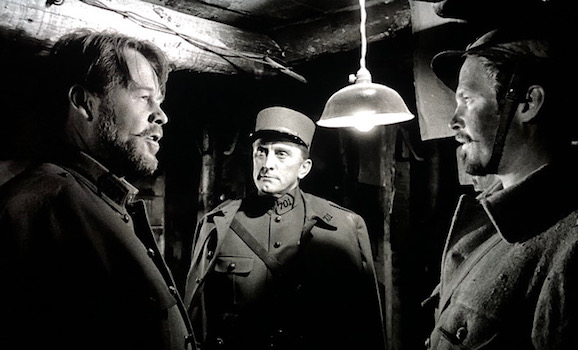