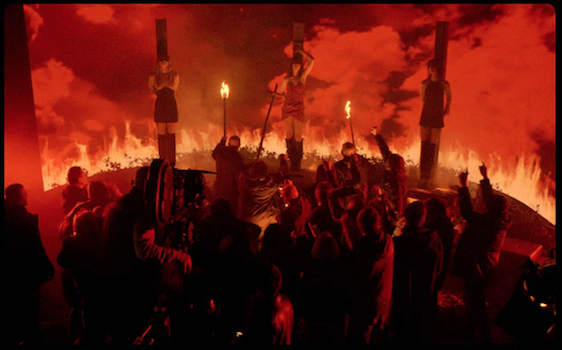 Gaspar Noé introduces his long short film Lux Aeterna to a New York audience in an essential bonus feature included on Yellow Veil Pictures' new Blu-ray. In a nutshell, Noé says he was given a budget by the folks at Yves Saint Laurent to make whatever he wanted. The brand's only requirements were that the actors must wear the brand's clothing and it must be ready in two months for the 2019 Cannes Film Festival. He quickly put together a five-day shoot with no real plan. The end result feels like it.

The 51-minute flick, starring Béatrice Dalle as the director of a film that's falling apart and Charlotte Gainsbourg as her (initially) indulgent lead performer, achieves scattered moments of brilliance and even fumbles into transcendence. However, these moments are essentially only in the film's bookending sequences. There's a long section in the middle that plays like a half-assed hybrid of Mike Figgis's improvised split-screen experiment Timecode and Olivier Assayas's French film industry satire Irma Vep. One suspects these middle sequences might have been more fun for the cast to make than it is for the audience to watch.

But, about those bookends. The opening is a killer improvised dialogue between Dalle and Gainsbourg riffing on their own experiences as women in the French film industry that is both wickedly funny and surprisingly informative. Béatrice's film-within-the-film depicts her female characters -- Charlotte, Fury Road's Abbey Lee, and Mica Argañaraz -- burned at the stake as witches. The concluding section of Lux Aeterna is predicated on the digital background behind the actresses glitching out and strobing, terrorizing them with colors and sound -- a sort of abstracted burning, as they are tied to the prop stakes. It's not Noé's first rodeo when it comes to flicker visuals or unsettling soundtracks, but he does a damn good job with it here.

In the end Lux Aeterna doesn't have a complex argument to make about the culture of filmmaking and its prevalent sexism, which is probably fine for a hyped-up clothing ad. The experience of sitting in a darkened room and surrendering to the climactic assault on the senses is pretty much worth the price of admission here.

The Blu-ray
Lux Aeterna is available in a standard 2-disc edition with reversible cover art or in a limited edition slipcase that adds a 60-page book. The latter is available exclusively from the Vinegar Syndrome website.

The Video:
The film is presented in an AVC-encoded 1080p 2.35:1 presentation that actually shifts in aspect ratio throughout the film. Many sections are presented in split screen. The film has a loose digital feel and can be a bit underlit in certain moments. The blacks hold up pretty well though in these circumstances and don't get blocky or noisy. The final blast of color is overwhelming and vivid.

The Audio:
The soundtrack is presented in one lossless option, French and English DTS-HD MA 5.1 surround, and two lossy options, Dolby Digital 5.1 surround (640kbps) and Dolby Digital 2.0 stereo (448kbps). The lossless is easily the version that best serves Noé's audience manipulations and creates the greatest effect in the final section. English subs are burned-in for the French dialogue, but optional English captions are available for the random moments spoken in English.

(HD, 11:02) - Recorded at New York's Metrograph Theater, director Noé provides some essential info about the making of this film and how it led to his more serious split-screen project Vortex. Noé is quite self-effacing and funny here. Well worth a watch on first viewing.


Final Thoughts:
For a thrown-together lark, Gaspar Noé's Lux Aeterna is impressive. It's wildly indulgent for a short film and not thoughtful enough for a feature, but the highlights are so strong that fans of Noé or leads Charlotte Gainsbourg and Béatrice Dalle must take notice. Yellow Veil Pictures' package is outstanding. The new digital transfers of work by Kenneth Anger, Paul Sharits, and Tony Conrad (plus a Pasolini short) included on the second disc alone make this an essential release for avant-garde cinephiles. Highly Recommended.