Fiddler's Journey to the Big Screen

Fiddler's Journey to the Big Screen (2022), about the making of director Norman Jewison's classic adaptation of the smash Broadway musical Fiddler on the Roof (1971), is entertaining if a bit disjointed. It's as if editor-producer-director Daniel Raim envisioned a more narrowly-focused work but got sidetracked during filming and the result became a jumble of themes and anecdotes that, while enjoyable, aren't exactly cohesive.

Raim, who studied under Fiddler production designer Robert F. Boyle and through him met Jewison, states in a statement included as an insert with the Blu-ray that he "wanted to make a documentary about the power of the creative process, exploring Jewison's artistry, compassion, and humanity as well as his spiritual and creative quest directing Fiddler on the Roof. The movie is certainly that part of the time, but it veers off into other areas while curiously omitting other aspects of the production.

Raim's relationship with Boyle and Jewison helps explain why he would tackle the making of Fiddler to begin with, a movie already pretty exhaustively documented in extra features found on that film's myriad home video releases. Jewison and star Topol, for instance, years ago recorded a charming, informative, and insightful audio commentary track running the length of the film: three hours. Raim's film revisits some of that same material, though there are a couple of nice surprises here and there. 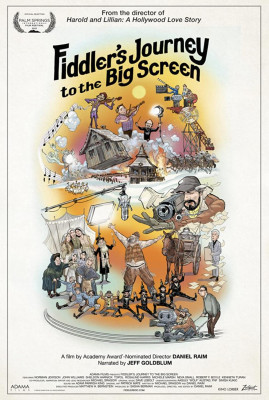 Based on Sholem Aleichem's Tevye and His Daughters, the 1964 Broadway musical adaptation, music and lyrics by Jerry Bock and Sheldon Harnick, with a book by Joseph Stein, became the longest-running Broadway musical, a record it held for ten years to everyone's astonishment; most thought its appeal limited, primarily to New York-based Jewish audiences but instead its universally appealing story charmed the world over.

The movie of Fiddler was another surprise, arriving just as big-scale movie musicals where crashing and burning at the box office: Hello, Dolly!, Doctor Dolittle, Star!, Darling Lili, Paint Your Wagon, Song of Norway, Man of La Mancha, etc. pretty much killed the genre. Again, however, Fiddler was an unexpected success amid all this drudgery, a critical and enormously commercial success -- even Pauline Kael loved it. The driving force behind much of that success was, clearly, Norman Jewison.

As Raim's film details, the mistaken assumption that Jewison's a Jew dates back to his childhood, when because of his name, the Protestant nevertheless encountered a kind of anti-Semitism in his native Toronto. As a result, he hung out with other Jewish kids yet, conversely, he wasn't welcome at their local synagogue. This identification as sort-of Jew follows Jewison his entire life, and becomes one of the main themes of the documentary.

At the same time, the movie chronicles Jewison's efforts to break away from the Chagall-influenced sets and Vaudevillian clowning of Zero Mostel's Broadway version. Jewison wisely wanted an historically accurate and believable Anatevka of 1905, filming it on location in Yugoslavia. He got Israeli actor Topol to recreate his acclaimed London cast performance, but also helped the actor adapt his performance to the much more intimate medium of cinema.

Raim's film meanders about, not always clearly connecting dots. Jewison had a background directing TV variety shows like the great first-half season of Judy Garland's show, eventually able to express his interests in civil rights and related issues in movies like In the Heat of the Night. He tells a great story of being on leave from the Royal Canadian Navy and innocently riding in the back of the bus in the deep South, an unwitting first encounter with segregation. Stories like this help flesh out Jewison as a person, but only vaguely connect with Fiddler.

I suspect Raim realized he needed something to make the documentary more saleable, and near the end of production added new interviews with the three actresses that played Tevye's older daughters in the film: Rosalind Harris (Tzeitel), Michele Marsh (Hodel), and Neva Small (Chava). This was a scoop of sorts as the three apparently hadn't been interviewed for earlier home video releases, and each of them has charming stories to share, including some insight about Jewison though, again, these segments also go off into unrelated tangents.

Some aspects of the film that wouldn't have been all that relevant had the film been exclusively about Jewison's relationship with Fiddler but play like curious omissions in its final form. Other than appearing in film excerpts, there's no mention at all of co-star Norma Crane, who died of cancer at 44, not long after Fiddler's release. Further, though it emphasizes Fiddler's Jewishness, the documentary likewise never delves into Molly Picon (Yente, the matchmaker), an icon of Yiddish theater.

A Zeitgeist Films release via Kino Lorber, the Blu-ray of Fiddler's Journey is presented in 2.35:1 ‘scope format, a wise choice as that aspect ratio matches the screen shape of the 1971 film, made in Panavision, and excerpted throughout. Audio is offered in both 5.1 and 2.0 stereo mixes, with optional English subtitles. Region "A" encoded.

Supplements include Raim's Oscar-nominated short about Boyle, The Man on Lincoln's Nose; extended interviews with most of the cast; and excerpts from Raim's Harold and Lillian: A Hollywood Love Story that discuss Fiddler's costumes.

Perfectly enjoyable but not exceptional, Fiddler's Journey to the Big Screen is Recommended.