Jack and the Beanstalk (3-D Archive)

The 3-D Film Archive's long-awaited 4K scan and restoration of Abbott & Costello's Jack and the Beanstalk (1952) is, predictably, a revelation. The movie looks far better than it has looked since its original release and, more surprisingly, sounds infinitely better. I first became enamored of the team with early Sunday morning airings of their films, but whenever Jack in the Beanstalk was shown, a 16mm black-and-white print was used, the local ABC affiliate super-imposing "originally filmed in black-and-white" during the opening titles, which included a credit for SuperCinecolor and didn't fool elementary school-age me. Years later, during the early days of home video, the market was flooded with inferior color copies. Last year, the VCI label released its own "4K restoration" which I reviewed; that release can now safely be tossed in the trash bin.

This release is also noteworthy for its many hours of extra features, supplements that, all by themselves, easily justify a purchase. That said, I wish I had more affection for the main feature, which I must admit up-front is one of my least-favorite Abbott & Costello movies.

(Bud) Abbott & (Lou) Costello spent nearly their entire movie career (1940-55) at Universal, though Universal loaned them out to MGM for a few films in the first half of the forties. Later, the team renegotiated their contract so that they could appear in movies they'd produce independently for release through other distribution companies, up to one feature per year. That began with The Noose Hangs High (1948), which from a production standpoint strongly resembles Universal's house style. Africa Screams (1949) appeared the following year.

After that, for a while, they made nothing but Universal movies, but in 1951/52 they did two indies for release through Warner Bros., Jack and the Beanstalk released in 1952 and Abbott & Costello Meet Captain Kidd in 1953. Lou, along with his brother Pat produced Jack while Bud handled those reins for Kidd.

Jack and the Beanstalk was quite a departure for the team: Lou had suffered the worst possible tragedy in 1943, when his infant son drowned in the family swimming pool, and it subtly affected his screen persona. In their earliest films, Lou was a kind of street-smart adult playing the role of an innocent patsy, or maybe an innocent patsy who sometimes is more street-smart than he appears, but after his son's death Costello onscreen gradually became much more childlike, a big kid that appealed to children in the movie audience. Like Jerry Lewis, eventually the main demographic of ticket buyers of Abbott & Costello movies were kids, which wasn't at all the case in their first decade of making movies.

Clearly, Lou aspired to make a family-friendly musical-comedy-fantasy that would showcase his talent in a different manner. Where the misguided Little Giant (1946) had Lou venturing into Chaplinesque territory, Jack and the Beanstalk seems to be emulating Danny Kaye. However, the budget, around $682,000, was too low to fully realize this aim. (Kaye's Hans Christian Andersen, made around this same time, cost $4 million.) Though in color, the team's first, it looks cheap, the songs are mostly unmemorable, and the special effects are crude and limited, and Jean Yarbrough's direction is especially poor. Worst of all, it's not very funny. 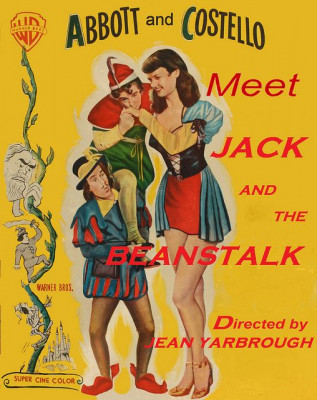 Its structure was obviously influenced by The Wizard of Oz, which was rereleased in 1950, the year before this was made. Like that film, Jack and the Beanstalk opens in black-and-white (sepia-toned), then switches to color for the fantasy scenes, then back to black-and-white for the it-was-all-a-dream-or-was-it finish. In the framing story, Jack (Costello) is a would-be babysitter hired by Eloise (Shaye Cogan) and her fiancé, Arthur (James Alexander), to look after her annoying kid brother, smarmy child prodigy Donald (David Stollery). Jack's "agent," Mr. Dinkle (Abbott), who takes a 90% cut of Jack's earnings, tags along. (Incredibly, the employment agency hires Jack on the spot, with no references or anything, and Eloise blithely welcomes these two total strangers into her home and immediately departs.) To entertain Donald, Jack begins reading "Jack and the Beanstalk," or rather Donald reads it to him, because Jack can't quite manage the book's big words. (Lou is funny here.) Within minutes, Jack is fast asleep. Some babysitter, he. rn

Jack's dream follows the classic fable fairly closely, with Jack (Costello) selling the family cow to the local butcher, Mr. Dinklepuss (Abbott), for a handful of "magic beans" that, once planted, overnight transform into a colossal stalk, stretching high into the clouds and the land of the Giant (Buddy Baer), who has kidnapped the beautiful Princess (Cogan).

Jean Yarbrough was a hack culled from Poverty Row, where he helmed cheap horror movies like The Devil Bat and King of the Zombies along with Monogram's "Bowery Boys" features, Yarbrough directing five entries. Occasionally he worked at bigger studios, such as Universal for She-Wolf of London and House of Horrors, probably for no other reason that he worked fast and cheap.

Jack and the Beanstalk cries out for imaginative direction but Yarbrough's direction is artless. Most scenes are unimaginatively staged in wide master shots from uninteresting angles. Lou's solo, "I Fear Nothing," is almost endearing, but staged so poorly the number drags instead of eliciting the Danny Kaye-like charm to which it obviously aspires. The cramped soundstage sets don't help; introductory scenes cut away to real exteriors, but virtually all of the fantasy material is locked into these cramped, over-lit sets. A musical finale is undercut by the dancers clearly not having enough room to move around, and the actors frequently cast shadows on the painted "sky" behind them. The giant's castle is better; my guess is that those were standing sets left over from the lavish Joan of Arc, shot at Hal Roach Studios a few years before.

The budget was just too low to allow for any fancy special effects. Seeing it for the first time as a child, I was sorely disappointed that the "Giant" was just a big man in a padded costume wearing lifts. (Baer himself stood around 6'6".) None of the sets or props are oversized, and effects are limited to a couple of simple matte shots and a very brief bit of cell animation showing the sprouting of the beanstalk.

The picture's saving grace is Lou's sincere performance. Much of the comedy is culled from bits from past glories, such as Lou's comic dance with the Giant's equally towering housekeeper (Dorothy Ford), a sequence reworking the dance number Lou did with Joan Davis in Hold That Ghost (1941). Yarbrough's direction, however, once again diffuses much of its potential.

The movie may disappoint, but the 3-D Film Archive delivers the same top-tier work found in all of their releases. All but one small snippet of original negative is lost, but using other 35mm SuperCinecolor elements, the 3-D Archive has managed to squeeze every ounce of clarity and accurate color possible. There's a night and day contrast between VCI's earlier Blu-ray and this version, which shows far more time, care, and attention to detail. As noted above, the sound (with optional English subtitles) is unexpectedly greatly improved and the movie plays better with this much cleaner audio. Region-free.

3-D Archive really went to town with the extra features. Viewers are given the option to see an introduction narrated by Chris Costello, Lou's youngest daughter, whose interest in the story may have inspired the film. A&C experts Ron Palumbo provides an insightful audio commentary, assisted by reflections from former child actor David Stollery. Jack Theakston narrates a highly detailed look at the technology and history of Cinecolor, including fascinating clips from other Cinecolor or SuperCinecolor titles, though I must confess I still don't fully understand how the process worked. "Climbing the Scales" looks at the music of Jack and the Beanstalk, hosted by Ray Faiola.

I particularly enjoyed "Beanstalk Ballyhoo," hosted by Palumbo. I've seen similar features accompanying other DVDs and Blu-rays, but never before in such entertaining, fascinating detail. In particular Palumbo details day-by-day the team's promotional tour, with photos, dates, showtimes, and a clip from The Colgate Comedy Hour.

Also included are clips and other material from an extended cut (Lou preferred the 78-minute included here), also detailed by Palumbo; an extended "Abbott and Costello Meet the Creature" sketch from The Colgate Comedy Hour, featuring an unusually svelte Lou clowning with Glenn Strange as the Frankenstein Monster and Ben Chapman as the Creature from the Black Lagoon, and Bud's nephew Norman Abbott as a mad Universal prop department man. In the background viewers will note masks from their recent Meet Dr. Jekyll and Mr. Hyde.

Newly discovered newsreel footage shows the team performing "Who's on First?" on December 2, 1940, while a Rudy Vallee radio sketch and 1952 children's record version of the film play over still images; more images are hosted by Chris Ordway. Finally, there's a collection of 18 A&C trailers. For those used to dog-eared Realart versions normally included with home video releases, this collection is a real eye-opener. A few are pristine recreations, done digitally, but others are extremely rare and/or in terrific condition. Who'd thought Comin' Round the Mountain could look this good? A trailer for the aborted A&C feature (at least as far as they were concerned) Fireman Save My Child (1954) is also included, with audio commentary yet.

Jack and the Beanstalk may be a long way down from the likes of Buck Privates and Hold That Ghost, but the 3-D Archive's restoration and extra features make this one of the year's best Blu-ray releases. A DVD Talk Collector's Series title.