Trials of Oscar Wilde, The

Now largely forgotten, The Trials of Oscar Wilde (1960) is a very pleasant surprise. I was only vaguely aware of the film, and what I'd read about it suggested the film danced around Wilde's homosexuality (or bisexuality) to the point of absurdity, refraining from addressing directly the very premise of the story and its main character.

In fact, at a time when homosexual acts were still illegal in Great Britain (it would not be decriminalized in England and Wales until 1967), the film makes no bones about the charges levied against the celebrated Irish poet and playwright, or his feelings toward Lord Alfred "Bosie" Douglas, the source of Wilde's downfall. Indeed, the film appears to be quite accurate historically (trial scenes are lifted directly from its transcript) and though star Peter Finch looks nothing like Wilde, his performance is exceptional.

Further, the movie itself is handsomely produced in large-format Technirama with particularly good production design by Ken Adam (Dr. Strangelove, various Bond films, etc.). All told, this is a most underrated, unjustly forgotten work. 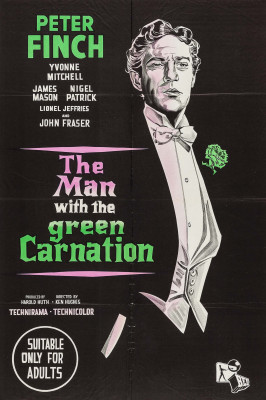 With the West End opening of Lady Windermere's Fan, Oscar Wilde (Finch) is the toast of London. The evening is marred, however, by the appearance of brutish, ungentlemanly Lord Queensberry (Lionel Jeffries), furious that Wilde has been having an affair with his ne'er-do-well son Bosie (John Fraser). The poet-playwright is himself married to Constance (Yvonne Mitchell, of the BBC 1984), with whom Wilde has two children.

Further, a man named Alfred Wood (a young James Booth), Bodie's former lover and valet, appears at Wilde's home and attempts to blackmail the writer with an incriminating love letter Wilde sent to Bosie. Wilde, however, unexpectedly charms Wood instead, taking him out to dinner and embarks on an fling with Wood, though Wilde's heart all too clearly belongs to Bosie.

After several confrontations with the Marquess of Queensberry, Wilde has him banned from the premiere of his next play, The Importance of Being Earnest, prompting the angry old man (Jeffries, however, was barely older than Fraser, playing his son) to instead leave a calling card at Wilde's club accusing him of being a "sodomite." Unwisely, Wilde decides to sue the Marquess for criminal libel, which backfires spectacularly when Lord Queensberry hires shrewd barrister Sir Edward Carson (James Mason) to represent him.

Though hardly sexually explicit, The Trials of Oscar Wilde was extraordinarily daring, brave even, for the time in which it was made; only smaller distributors would touch such controversial subject matter (Eros distributed in the UK and Kingsley-International Pictures in the U.S.). Produced by Irving Allen and Albert R. "Cubby" Broccoli's Warwick Films with a screenplay by Montgomery Hyde and director Ken Hughes from John Furnell's The Stringed Lute, the movie presents Wilde, Bosie, and Constance Wilde as intriguingly complex and believable characters. For one thing, in the movie at least, Wilde also loves, even adores his wife and children; she is fully aware of her husband's infidelities with much younger men but empathizes with his complex personal makeup, as an extraordinarily gifted artist, to a point she's willing to look the other way. Wilde himself is depicted as seriously flawed: he foolishly believes he can ride out any controversy on wit and charm alone, erring by lying to his own barrister about his sexual proclivities. His love for Bosie is like an addiction, Wilde trapped in a self-destructive relationship with an extravagantly selfish man that treats Wilde like a sugar daddy, hitting him up for money even when Wilde becomes deathly ill. Actor John Fraser, in life fairly open about his own homosexuality, is excellent playing a man incapable of truly loving another.

Finch never once falls back on gay stereotypes, instead playing Wilde as a man who publicly exudes confidence and wit but who, privately, feels so deeply for Bosie that he's willing to destroy himself for a lover unworthy of such obsessive passion. Finch is slightly less convincing as the public Wilde; the filmmakers considered John Gielgud, who might have bettered Finch in this way, but perhaps less able to express Wilde's longings for Bosie though Gielgud, like Fraser, was gay himself, if closeted.

The Trials of Oscar Wilde was one of two competing films released weeks apart. Oscar Wilde, released by Fox, starred Robert Morley as Wilde, John Neville as Bosie, Phyllis Calvert as Constance, and Ralph Richardson as Sir Edward Carson. In most respects that is considered the inferior film, though Richardson won praise as the barrister parrying with Wilde, although James Mason is very good here. In competition to reach movie screens first, Trials was shot and released over just seven weeks, though the hurriedness doesn't show. The movie is quite handsome and lavish. Legal battles over the titles led this to be called The Man with the Green Carnation in some markets.

The Trials of Oscar Wilde was photographed in Technirama, the VistaVision-like horizontal film format that added a slight anamorphic squeeze, the added negative real estate resulting in an exceptionally sharp image. (Spartacus, Zulu and others were also filmed this way, those exhibited in 70mm.) Licensed from MGM, Kino's Blu-ray begins with terrible-looking title elements, but the rest of the movie snaps into impressive clarity throughout. It's not the best-looking of HD transfers of Technirama titles, but it's certainly good enough. The DTS-HD Master Audio (mono; probably reflecting the original release version) is crisp and optional English subtitles are provided on this Region "A" encoded disc.

No supplements save for a HD trailer bearing The Man with the Green Carnation title.

The Trials of Oscar Wilde is a film ripe for rediscovery. Way ahead of its time in 1960, it still impresses to this day. Highly Recommended.