Watching Rod Serling's Night Gallery's second season (1971-72), virtually all of the same plusses and minuses of the first season apply here, too. There are some qualified strong segments, with decent scripts and/or performances, but they're jumbled in with a greater number of weak and sometimes awful ones. To wit, this review to a large extent covers the same issues as my review of Season 1.

Back in the 1970s, when Serling's Twilight Zone was a substantial hit in syndication, like many others I watched its reruns obsessively. When Night Gallery joined Twilight Zone in syndication sometime later, initial excitement quickly turned to disappointment, even heartbreak. Randomly select any 10 episodes of Zone and chances are you'll end up with a couple of great ones, six pretty good episodes, and maybe one or two stinkers. By comparison, you were lucky to get one or two good segments out of every ten Night Gallerys, with many downright embarrassing in their awfulness.

However, it turns out there was a reason Night Gallery seemed mostly terrible in syndication, and it wasn't Serling's or the show's fault. Night Gallery was a one-hour series for its first two seasons, and a 30-minute show for its third and final year, episodes composed of multiple segments of varying length, as little as five minutes, and as long as 40 minutes thereabouts.

For syndication purposes Universal radically recut and retooled Night Gallery in order to sell it as a 30-minute show, with enough episodes to make it desirable to markets wanting to air it five times per week. Segments that ran long were ruinously cut for time, while those too short were painfully and unimaginatively expanded using outtakes and stock footage from old Universal movies and TV shows, all with the subtlety of using scissors and a sledge hammer to force mismatched jigsaw pieces together. Reportedly, four-tenths of the segments, 39 of 98, were severely altered for their syndicated versions. Further, 25 episodes from a completely unrelated, short-lived hour-long series, The Sixth Sense, lost 50% of its original running times and dumped into the package, Serling filming new intros for those prior to his death in 1975.

Kino's new Blu-ray, by contrast, presents the original one-hour format of Season 2 as it originally aired (with a few minor exceptions). By no means does this fix all the show's many problems, but it does play significantly better. It still doesn't hold up as well as Twilight Zone nor does it have that earlier series' high batting average. But, in its original form, combined with the startlingly good video transfers and worthwhile extra feature, Night Gallery is once again a fun if sometimes frustrating show to watch. 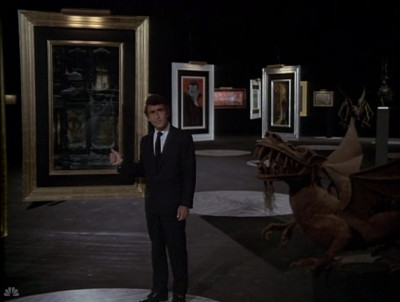 The series seems to have resulted from the popularity of horror anthology films like those produced by Britain's Amicus Productions as well as ongoing sales of horror fiction and comic books like Gold Key's Twilight Zone comics and similarly tame ones like Boris Karloff Tales of Mystery, comics popular long after the demise of both Twilight Zone and Boris Karloff.

The program began as a TV-movie/pilot film, also called Night Gallery, which originally aired on November 8, 1969. When it became a series 13 months later, the same format was adopted, albeit within a tighter, 60-minute format. It had several advantages over Twilight Zone: the segments had flexible running times, and because Night Gallery's first season was part of a larger, "wheel series" with three other programs (McCloud, San Francisco International Airport, and The Psychiatrist) only six one-hour episodes were produced that entire first year. (Perversely, however, these shows did not alternate with the three other shows but instead each shot their wads on consecutive weeks, with the Night Gallery shows airing in December 1970/January 1971.) When it returned in September of '71, the wheel-show aspect had been dropped, and Night Gallery aired like any other weekly series, 23 one-hour episodes through March 1972.

The problems with the series, however, remained: 1) With rare exceptions, Serling was completely burned out as a dramatist; 2) Universal's sausage factory "house style" proved far inferior to Twilight Zone "mini-movie" look, aided by that program's access to MGM's facilities and backlots; 3) Good segments are frequently undermined by bad ones, and promising/moody segments often disappoint with tame or sloppily-realized payoffs.

Rod Serling had been one of early television's great writers, famous for television plays like Patterns and Requiem for a Heavyweight. Seeking more independence via Twilight Zone, Serling worked like a dog those first several years, committing himself to the show (and protecting its other writers) while also writing feature film screenplays, appearing on TV shows and in commercials, and even teaching university writing courses. Of the 28 Twilight Zone episodes Serling wrote that first season, all but one is very good to excellent, including some of his best-ever writing (as in "Walking Distance," possibly Zone's finest episode). In its fifth and last season Serling wrote 17 of 36 episodes, and roughly half of those are pretty bad, though he'd still rise to the challenge occasionally, penning a few memorable shows even then.

After Zone Serling never fully recovered. At the time of Night Gallery he was narrating, sometimes spoofing his persona in myriad TV commercials and hosted a game show, the original version of The Liars Club. He received a co-writing credit on the wildly successful film of Planet of the Apes (1968), but Serling's work on that appears mostly confined to the earliest drafts, c. 1963 or so when it was tied with director Blake Edwards at Warner Bros. Much of Serling's script was rewritten by Michael Wilson.

Universal's artless grindhouse style compares unfavorably to the more polished and cinematic Twilight Zone. The lighting is often harsh and unflattering, some of the sets, props, and special effects look cheap, even threadbare. This is stands out even more in high-def: one good Night Gallery segment uses a house on the backlot for exterior shots, but by this point the backlot house had a heavily damaged roof and looks about ready to collapse.

The ups and downs of the series are exemplified in the season opener, which begins with "The Boy Who Predicted Earthquakes," of the most haunting episodes, about a young boy (Clint Howard) who can predict the future and becomes a TV celebrity watched by millions for his uncannily accurate predictions. Based on a short story by Margaret St. Clair and directed by John Badham, it's mostly excellent, though Serling's adaptation transforms the story's network executive (Michael Constantine) into a typically Serlingian blustery, cynical and prolix corporate villain. Another segment, starring George Maharis as a man unable to control one of his hands, which seems bent on murder and mayhem independent of its owner, is also above average, but the episode is seriously marred by two comic blackout sketches, "Miss Lovecraft Sent Me," an awful segment written by co-producer Jack Laird featuring Joseph Campanella as a vampire and Sue Lyon as a naïve babysitter; and the broadly comic "Phantom of What Opera?" with Leslie Nielsen spoofing the Lon Chaney Phantom, which at least has a mildly satisfying payoff.

The third episode of season two is another typical example, with the first and longest segment, "Since Aunt Ada Came to Stay" largely effective thanks to the all-in performance by guest star Jeanette Nolan as a genuinely evil and notably determined witch threatening the marriage of James Farentino and Michelle Lee. Less successful but not terrible is "The Flip-Side of Satan," a one-man vehicle for, of all people, Arte Johnson, he playing a disc jockey trapped at a remote radio station. In between, however, is another awful Jack Laird attempt at comedy relief, "With Apologies to Mr. Hyde," this time with Adam West as the mad scientist and Laird himself as his assistant. These dreadful blackout gags seem loosely inspired by the aforementioned comic books of the period, themselves knock-offs of the great 1950s E.C. era, but here all they do is throw the balance off the more carefully modulated, more serious scripts.

Licensed from Universal, Kino's Night Gallery Season Two is presented on five Blu-ray discs. The 1.37:1 image throughout, 2K restorations of inter-positives, is excellent, with much greater detail visible. The DTS-HD Master Audio (mono) is fine throughout and optional English subtitles are included on these Region "A" encoded discs.

The most valuable extra is "The Syndication Conundrum: A Look at the Show's Troubled Second Life in Reruns (Part 2)" which goes into considerable detail about changes made to episodes for syndication, and which is followed by side-by-side comparisons of the original and syndicated versions. Also included are "Lost Tales from Season 2," four segments reshuffled out in network reruns but included separately here. "Revisiting the Gallery" is an extra feature from an earlier DVD release that includes several interview subjects that have since passed away. Artist Tom Wright looks at the paintings featured on Night Gallery, and there are TV spots and a modest insert booklet is also included.

While this review may appear overly harsh, I admit to greatly enjoying Night Gallery at least some of the time, and seeing many segments as they originally aired for the very first time does make a huge difference. The transfers and extra features make this package very desirable, and the set is Highly Recommended.