Buck and the Preacher (The Criterion Collection)

Teaming Sidney Poitier and Harry Belafonte for a Western focusing on the still largely-untold story of former black slaves in the American West sounds irresistible and seemingly unmissable. Unfortunately, Buck and the Preacher (1972), co-executive produced by the actors and directed by Poitier, isn't very good.

Working from this premise, it would seem the filmmakers could have gone in one of two directions: a classical Western that just happened to star African-American actors, or a more probing, enlightening and historically accurate film about freed slaves and their struggles in the American west. Instead, the undernourished, almost sketchy script by Ernest Kinoy, primarily a television scribe of the Paddy Chayefsky/Rod Serling generation, tries to have it both ways, failing to satisfy on either count. Poitier, who took over the direction (his debut as such) after firing Joseph Sargent, also disappoints. Poitier, whose only previous Western credit was Duel at Diablo (1966), in which he co-starred with James Garner, has no feel for the genre. His direction is awkward, even confusing at times. He doesn't even direct himself well, Poitier delivering a rare unmemorable performance.

Watching Buck and the Preacher, I kept wishing Criterion had instead licensed something like The Wilby Conspiracy (1975), an unjustly forgotten Poitier film directed by Ralph Nelson, who years before had famously directed the actor's Lilies of the Field (1963). Wilby, starring Poitier as a fugitive black revolutionary in apartheid South Africa, is both harrowing and hilarious, Poitier giving one his best and most underrated performances. It was one of the first and certainly one of the best films made about apartheid, its stark political views as compelling as its engrossing story. Just about everything that makes The Wilby Conspiracy a great, neglected work is absent in Buck and the Preacher. 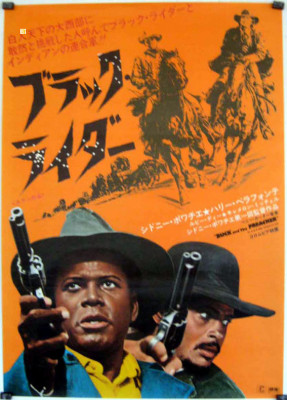 Former Union soldier Buck (Poitier) is a wagon master leading former slaves west through late-1860s Kansas Territory. However, Louisiana plantation owners, missing all that cheap labor, have dispatched Deshay (Cameron Mitchell) and other bounty hunters to terrorize these all-black wagon trains, burning wagons and supplies, and killing many of the men, women, and even children, to get them give up and turn back. (Deshay's methods would seem contrary, but never mind.)

Deshay is particularly anxious to track down Buck, who with help from his wife, Ruth (Ruby Dee), manages to escape into the wilderness where he encounters "Preacher" (Belafonte), a wily con man masquerading as an evangelist. Buck steals his horse, and later Preacher considers selling Buck out to Deshay, but eventually they team up to help Buck's latest stranded wagon train.

Early scenes are unnecessarily confusing. Two different wagon trains managed by Buck come under attack by Deshay. The latter wagon train has stopped to grow crops on behalf of a white farmer in exchange for cash money they plan to use to finance the rest of their trip. None of this is clear at first, nor is the fact that Buck's wife, Ruth, lives separately from both wagon trains, in a small house apparently nearby. The script and Poitier's direction don't help, as it's impossible to know how close or far away Ruth and Buck's home is relative to either camp, when and which group Deshay's men are raiding, or his peculiar strategy to murder the very former slaves they're trying to drive back to Louisiana.

Adding to the confusion is Poitier's tendency to shoot in tightly-framed medium and close shots, obscuring spatial relationships; and jazz great Benny Carter's musical score, dominated as it is by the boing-boing-boing of a mouth harp, rather inapt orchestration in the film's grimmer scenes. The screenplay is also oddly structured, with Deshay, his men, and even the wagon train cast aside in the film's third act as Buck and the Preacher decide to rob a bank (effectively to get the money Deshay stole) and are hotly pursued by a local sheriff (Mexico-based American actor John Kelly) and his posse, scenes imitative of Butch Cassidy and the Sundance Kid. Further, these scenes subtly alter the film's intent: unlike Deshay, the sheriff isn't racist; he and his posse are after Buck and the Preacher for the felony robbery and multiple homicides they committed.

Though well-intentioned, little about the film sheds light on the difficulties of pioneer former slaves. A couple of brief scenes provide a bit of backstory for the two leads, but there's no sense of history being recreated here and the two stars play two-dimensional characters, though Belafonte seems to be enjoying playing a part so far removed from his much-loved public persona. Deshay and the other heavies, and members of the wagon train, aren't developed much at all.

In the Dick Cavett episode with the stars included as an extra feature, Poitier asserts that Buck's scenes negotiating safe passage with the local Apache chief (Enrique Lucero) and his English-speaking wife (Julie Robinson, Belafonte's then-wife) was something innovative, that for the first time a movie was treating Indians as human beings, Poitier probably unaware these very things turned up repeatedly on TV Westerns like Wagon Train (1957-65) and that the Western genre had, albeit very gradually, long been trending in this direction since the late-1940s.

Transferred in 4K from the original 35mm camera negative, Criterion's release of Buck and the Preacher is presented in 1.85:1 widescreen and looks good, though not significantly better than other good transfers of early-‘70s Westerns. The mono audio was remastered from the three-track dialogue, music, and effects track, using the soundtrack negative as a reference, but to my ears the dialogue was mixed unnecessarily low relative to the music and effects. Optional English subtitles are provided on this region "A" release.

Supplements include a new interview with Mia Mask, author of Black Rodeo: A History of the African American Western; behind-the-scenes footage; interviews with the stars on The Dick Cavett Show and Soul!; a new interview with Gina Belafonte, Harry's daughter; and a booklet essay by critic Aisha Harris.

Worth seeing once but, given the caliber of talent involved and the rarity of black-themed Westerns, this is a big disappointment. Recommended, with reservations.