Symphony for a Massacre

French director Jacques Deray's Symphony for a Massacre (Symphonie pour un massacre, 1963) is an engrossing, well-acted crime thriller despite its sometimes sluggish pacing and the fact that attentive viewers will be able to accurately predict its major plot developments well in advance. Best remembered for the classic film La Piscine (1969), the best of many films he made with star Alain Delon, Symphony for a Massacre was Deray's third feature as director, its screenplay co-written by another French master, Claude Sautet (Classe tous risques, 1960). 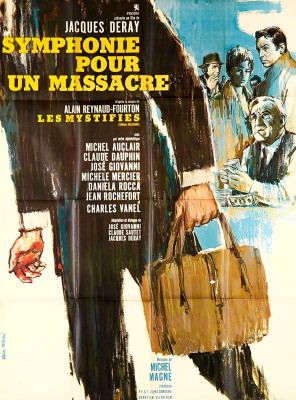 Writing a spoiler-free review of the film is virtually impossible as its major qualities are in its plotting; the first half of the film has the audience guessing what its main character is up to while the second half has the audience guessing how it might all unravel. The film is Highly Recommended, so if you haven't seen it, I'd urge you to stop reading here and watch the film first.

The story concerns a gang of five career criminals, albeit men working on the cusp of respectability. Together they own a nightclub-casino, with retirement-age Paoli (Charles Vanel) their cool-headed leader. Circumspect, younger Jabeke (Jean Rochefort) is taking a chance sleeping with Madeleine (Daniela Rocca), the beautiful wife of middle-aged Valoti (Claude Dauphin), but for now he suspects nothing.

Instead, the gang-of-five's energies are concerned about plans to buy a huge shipment of drugs from a connection in Marseilles. They pool their resources, but Clavet (Michel Auclair), irresponsible and perennially short of cash, buys counterfeit American dollars to cover his end of the deal. Moreau (José Giovanni) is entrusted to board the train to Marseilles with the valise full of cash but, shortly before his departure, Jabeke eyes an identical valise in a shop window, and hatches an ingenious plan to steal all the money en route.

The fun for the movie audience, of course, is in trying to guess what Jabeke is up to, how he's going to cover his tracks, hold up under the investigation of his partners, and wondering if and how he'll slip up. If, like me, you've seen lots of crime thrillers of this type, it's fairly easy to stay several steps ahead of the narrative, save for the twist ending that left me momentarily confused instead of fully satisfied.

Overall, though, Symphony for a Massacre is quite enjoyable, partly because of its fine cast. Rochefort (The Tall Blonde Man with One Red Shoe, Terry Gilliam's ill-fated The Man Who Killed Don Quixote) is fine as placid-faced Jabeke, playing his cards close to his vest. Charles Vanel (The Wages of Fear, To Catch a Thief), whose incredible film career stretched from 1912 to 1988, a feat matched only by Lillian Gish, is superb as the intelligent, organized ringleader. Like Vanel, Claude Dauphin and Michel Auclair occasionally appeared in Hollywood and Euro productions (Dauphin in Two for the Road, Grand Prix, Auclair in Funny Face and Day of the Jackal) but generally were better served in French films like this one.

One actor instantly recognizable by French cinema buffs, though perhaps not by name, is Billy Kearns, playing one of the two lucky American bankers playing baccarat at the gang's casino. Kearns was a Seattle-born actor living in France frequently called upon to play Americans in French films. He's prominently featured in a number of French classics, including Purple Noon (1960) and as the boisterous tourist in Jacques Tati's Play Time (1967). He also appeared in Orson Welles's The Trial (1962) and John Schlesinger's Marathon Man (1976).

Symphony for a Massacre is, occasionally, a little sluggish, with a few too many overlong shots following characters, mostly Rochefort's, getting from one place to another. Hitchcock often lingered on the details of his characters' movements (think of Tippi Hedren's safe-robbing in Marnie) but it was always to generate suspense and add to his characterizations, while here the many long shots following Rochefort up and down alleyways seem rather pointless at times, though this is a minor complaint and, anyway, such shots offer tantalizing views of early-‘60s Paris and Brussels.

Cohen Media Group's Blu-ray of Symphony for a Massacre, licensed from Pathé, sources a master positive for its 2016 restoration and 4K master, as the original camera negative could not be located. Nonetheless, the 1.66:1 black-and-white widescreen transfer is impressively sharp with strong blacks, and the optional English subtitles (which revert to French in the couple of English-dialogue scenes) are excellent, and the mono audio is strong. Region "A" encoded.

Not quite top-tier but a solid French crime thriller with an exceptionally good cast, Symphony for a Massacre is Highly Recommended.