A good, not great film noir-crime drama directed by William Dieterle and starring William Holden, Edmond O'Brien, and Alexis Smith, The Turning Point (1952) is handsomely made if overly familiar. Its story revolves around an independent investigation and hearings concerning organized crime in an unnamed American city, a premise so popular in the 1950s that it became a kind of sub-genre all its own. Because such films were not expensive to produce, they became fodder of myriad B-pictures (notably by Columbia and Allied Artists), especially later in the decade, and even turned up on TV shows like Deadline and M Squad.

The Turning Point is pretty good but not on the level of the best such films, such as Robert Wise's The Captive City (also 1952) and The Enforcer, a superior Humphrey Bogart vehicle released the year before with a similar plot and concerns. Bogie played the ADA in that film while O'Brien plays the special prosecutor here. Ted de Corsia plays a key villain in both pictures, while the police captain is played by interchangeable Roy Roberts in The Enforcer and by Ray Teal in The Turning Point.

Dieterle's film has less-interesting performances and much less atmosphere, though it uses slummy, long-gone Bunker Hill locations in downtown Los Angeles well. It's decent enough for the most part, just a bit generic with frustrating aspects common to almost all films of this particular type. 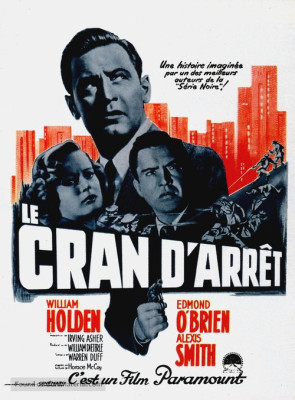 Special prosecutor John Conroy (O'Brien) is naïve and idealistic yet determined to crack down on the rackets plaguing his hometown, that unnamed large American city somewhere in the Midwest. His sets his sights on Neil Eichelberger (Ed Begley, Sr.), longtime gang boss of the local syndicate. Conroy offers boyhood pal Jerry McKibbon (William Holden) a job at his hotel-based headquarters, but the cynical reporter believes Conroy has bitten off far more than he can chew. Conroy and McKibbon visit Conroy's parents, he conscripting his police detective father, Matt Conroy (Tom Tully, later one of the leads in TV's The Lineup), whom John worships, as his chief investigator. But, o bitter irony: Matt is already on Eichelberger's payroll. Indeed, it was through those illegal payoffs that working-class cop Matt was able to put his son through college. Conroy's problems get worse when his society-bred girlfriend, Amanda (Alexis Smith), falls head-over-heels for McKibbon and he for her. For much of the picture, Conroy is too obsessed and single-minded to have any awareness of the film's love triangle or his father's shady past.

One of the problems with movies like The Turning Point is that "the syndicate" in such films are usually drawn in the vaguest of terms. Like the generic Big American City presented here the screenplay is short on specifics about Eichelberger and his operation. There are vague allusions to rising crime rates but the movie audience never sees any of Eichelberger's rackets in action, nor ordinary citizens being victimized by them. Eichelberger's front is only fleetingly referred to as a trucking company, suggesting a Jimmy Hoffa-type Teamsters organization, though he doesn't seem connected to any organized labor organization, either. In the film's scenes dramatizing the actual hearings, shady money transfers and the like are discussed, but these scenes have little impact since the movie audience has no clue to the structure of Eichelberger's criminal empire.

The movie was partly inspired by the widely-seen Kefauver Committee hearings on organized crime (1950-51), which threw a wide net targeting the interstate movements of the entire American mafia. Robert Wise's tense and exciting The Captive City was among the first films directly inspired by those hearings (and Ray Teal played the chief of police in that, too).

Further if only slightly undermining The Turning Point is the pat relationships of the principal characters and how they play out -- the fairly outrageous coincidence that Conroy's own father is "owned" by Eichelberger's organization, that Conroy and McKibbon are childhood friends, that the film's script hinges on an overly familiar character flipflop: cynical McKibbon, who wants no part of Conroy's investigation, in the end puts his life on the line to ensure its success while Conroy, wide-eyed and naïve at the start, suffers personally and thus inoculated against the realities of his job and succeeds despite impossible odds.

Yet, The Turning Point has many good points. After a dozen years in Hollywood Holden's hardened, acerbic screen persona was finally taking shape in movies like Sunset Blvd. (1950) and, though this film is a little beneath his abilities, further develops here, as the guy who wants no part of another man's hopeless cause, has no confidence in its success, yet finds himself drawn in anyway. In one sense, his character here is rather close to those he'd play in far better films like The Bridge on the River Kwai (1957).

Edmond O'Brien, with whom Holden would famously reteam with for The Wild Bunch (1969), is much less impressive, O'Brien's florid and intense theatrical style not really in synch with the film's styling, fusing a The House on 92nd Street semidocumentary look sometimes with standard noir aspects. The picture makes excellent use of the slums of Bunker Hill, including footage shot inside one of the cars on Angels Flight.

By Paramount's standards, The Turning Point was a modest "A" picture, made for around a million dollars and which used stock footage and recycled musical scoring to save money. On the other hand, the supporting cast is chockful of film noir types: beyond those previously mentioned like busy noir actor de Corsia, the cast includes Don Porter, Neville Brand, Rachel Ames, Whit Bissell, Russell Johnson (as a hitman with one line of dialogue), and Carolyn Jones (very good in her film debut).

Kino's Blu-ray of The Turning Point, licensed from Paramount and in its original 1.37:1 standard frame and in black-and-white, likewise looks and sounds very good, not great, the audio a DTS-HD Master Audio mono mix. Region "A" encoded.

Supplements and the video transfer may be repurposing those used for ViaVision/Imprint's Essential Film Noir Collection 3, which likewise features an audio commentary by Alan K. Rode. Regardless, Rode's commentary track is notably excellent, with an agreeable, useful mixture of personal observation, context and history. It's one of the best tracks I've heard this year. A trailer is also included.

Again, not great but pretty good and certainly worth seeking out, The Turning Point is Recommended.