Last Train From Madrid, The

One of the very few Hollywood movies made during the Spanish Civil War about the Spanish Civil War, The Last Train from Madrid (1937) is a real curio. Cribbing elements from Grand Hotel (1932) while anticipating other story aspects later incorporated into Casablanca (1942), it's both a good and bad movie, though even the worst aspects of the picture are fascinating in their own way.

American opinion was deeply divided about the war. FDR-New Deal liberals, American communists, and many of those concerned about the rise of fascism in Europe generally supported the Republicans in Spain, while American conservatives, particularly Catholics, including the Vatican leadership, supported the Nationalists led by Francisco Franco. The Republicans received military support from Mexico but also the Soviet Union, while the Nationalists had Italy and Nazi Germany on their side.

The war made headlines in the U.S. but was also such a hot potato that Hollywood studios weren't about to make a picture that took sides. In The Last Train from Madrid, like the handful of other studio-made Spanish Civil War films, literally no takes political position at all, boasting this in the movie's trailer and prologue. Its screenplay does backflaps to avoid offending anybody, even going so far as to never showing flags and fabricating entirely new, fictitious military uniforms so that audiences can't tell for sure which side any of the characters are on.

The movie is peculiar in other ways: though set in and around Madrid, of the cast only Gilbert Roland and Anthony Quinn are Hispanic (well, Dorothy Lamour a little bit as well) and it's odd seeing such emphatically American talent like Bob Cummings, in the role of "Juan Ramos," tossing in a Spanish word here and there but otherwise speaking with a standard American accent. 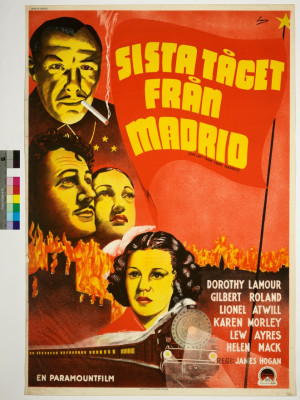 The all-star film follows seven characters caught up in the conflict, all more or less yearning for passes aboard the last train scheduled out of air-bombed Madrid, bound for relative safety in Valencia. (In fact, no trains actually went that way until after the war.) Eduardo de Soto (Gilbert Roland), a political prisoner, escapes to find his former lover, Carmelita (Dorothy Lamour), engaged to former comrade Ricardo Alvarez (Anthony Quinn), now an officer working under tough but not unsympathetic Colonel Vigo (Lionel Atwill).

Elsewhere Maria Ronda (Paris-born Olympe Bradna), a soldier in an all-women regiment, goes AWOL, hitching a ride into Madrid from American reporter Bill Dexter (Lew Ayres); they quickly fall in love, she also desperate to see her political prisoner father before he's executed. One soldier on that firing squad, Juan Ramos (Robert Cummings), refuses to discharge his rifle, prompting Vigo to order him transferred to Cordozza, the Spanish equivalent of the Russian Front. Before departing Madrid, Juan comes to the aid of a man fatally shot by a sniper after leaving the apartment of (coded) prostitute Lola (Helen Mack). Juan and Lola also fall in love, and decide to use the dead man's rail pass.

Meanwhile, at a nightclub Eduardo meets former lover Baroness Helene Rafitto (Karen Morley), and they plan on leaving Madrid together but her sadistic current lover, Michael Balk (Lee Bowman), simultaneously tries to blackmail her and inform on her to the military police. Elsewhere, Alvarez is torn between helping his old friend escape Madrid and remaining loyal to whichever side he's supposed to be on.

Produced by Paramount, the film has good and bad points. Top-billed Dorothy Lamour was just beginning her "Sarong Queen" period of playing exotic South Sea islander types, and was several years away from her expansion of that character as the game love interest in the Hope-Crosby "Road" movies of the ‘40s. Here, Lamour is decked out like a traditional senorita looking almost matronly, even though she was just in her early twenties. Expressionless and tight-lipped in her sequences, she looks pretty ridiculous and makes little impression.

However, both Roland and especially Quinn, he also in an early role, come off well, especially Quinn's scenes with Lionel Atwill, who rather unexpectedly toward the end prefigures Claude Rains's Capt. Renault in Casablanca with a sudden (if hardly motivated) turnabout. Roland, for his part, plays an interesting character, an escaped prisoner who has so longed for freedom that he moves openly about Madrid, unconcerned with being captured, as a day's worth of freedom means everything to him.

The chemistry between little-remembered Olympe Bradna, who has a kind of Deanna Durbin innocence and charm, and Lew Ayres, giving the film's most relaxed performance, is good as are the scenes between a very young Bob Cummings and Helen Mack, she cast against type as a world-weary, cynical prostitute. The casting may be all over the map, but the production looks relatively expensive, with impressive exterior sets of bombed-out Madrid, interiors of the military headquarters, hotel, nightclub, etc. all rather lavish.

Of course, the film might just as well have been set in Freedonia or Pottsylvania for all the different it makes and the alternative approach, to make a movie about the universal human suffering caused by war, mostly lapses into shameless melodrama. The movie uses familiar stock footage, taken not by second unit Paramount cameramen as publicity suggests, but from foreign newsreels, carefully omitting all the dead bodies found in the unedited versions of those films. The Last Train from Madrid is hardly on the uncompromising level of Ingmar Bergman's Shame (1968), for instance. Nevertheless, some of this melodrama is effective because, almost arbitrarily, as in real warfare, some of the main characters die before the movie's over.

Licensed from Universal, Kino's Blu-ray of The Last Train from Madrid, presented in its original 1.37:1 standard frame and in black-and-white from a 2K restoration, looks and sounds quite good, with the audio a DTS-HD Master Audio mono mix. Packaging lists the running time at 85 minutes but, in fact, the actual running time is 77 minutes, though the movie seems complete. Region "A" encoded.

Besides a trailer in unusually good condition and complete with narration and graphics, new is an audio commentary by writer Bryan Reesman, which helpfully puts the film into proper historical and industrial context. It's a good track.

No lost classic but quite fascinating, for history buffs and classic Hollywood film fans, The Last Train from Madrid is Recommended.