Filmmaker-writer-activist Michael Moore's only non-documentary film to date, Canadian Bacon (1995) is a broad political satire that, despite many amusing ideas and a fine cast, is curiously mirthless and, 27 years later, with the world spiraling into the abyss as it is, now plays especially toothless and even naïve. Why it's not better than it ought to be has, at least for me, always been a bit of puzzle, but watching MVD Visual's new Blu-ray I think I've been able to unravel some of the film's many problems. 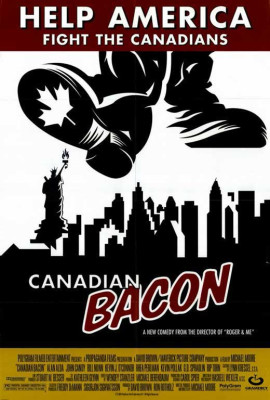 In Niagara Falls, New York, laid off workers from a weapons manufacturing plant owned by billionaire R.J. Hacker (G.D. Spradlin) unenthusiastically greet the unpopular Democratic U.S. President (Alan Alda), his trip intended to console the unemployed. The Cold War has ended, and this rare respite of peace in America has rendered workers like Roy Boy (Kevin J. O'Connor) and Kabral Jabar (Bill Nunn) jobless which, in turn, has made the President very unpopular in recent polling.

National Security Advisor Stu Smiley (Kevin Pollak) and Special Operations Command General Dick Panzar (Rip Torn), suggest the President launch a Grenada-type invasion to boost his numbers (and the coffers of the military industrial complex) -- but which country to attack? A televised Hockey Night in Canada provides the answer when American spectator Bud Boomer (John Candy, in his last fully-completed feature), a Niagara County sheriff, criticizes Canadian beer, prompting a huge brawl in the stands. Anti-Canada propaganda soon permeates the American mass media, resulting in anti-Canadian hysteria among Boomer and his friends, including girlfriend and gun nut Honey (Rhea Perlman), and whose actions, including militia-style mischief across the border and other sword-brandishing builds to threats of a nuclear conflict.

Moore's film seems heavily influenced by two great political satires of the 1960s, Stanley Kubrick's Dr. Strangelove (1964) and Norman Jewison's The Russians Are Coming, the Russians Are Coming (1966). In Moore's film, efforts to stop a rogue nuclear attack mirror Kubrick's film, while Alan Alda's ineffectual U.S. President and (especially) Rip Torn's hawkish general are noticeably similar to Peter Sellers and George C. Scott in Kubrick's great film. Meanwhile, the hysteria and mob mentality of Candy & Co. is very much like what happens in Russians. However, both of those earlier films succeeded where Canadian Bacon does not: they generate suspense (Can we stop the bombs from dropping? Can the Russian submarine crew get away before they're discovered?) and were built around broad yet also somehow rich characterizations, where those here merely resemble cartoon characters.

Moore's film is full of funny ideas. One throwaway bit emulates the animated propaganda maps of World War II and the Cold War, maps showing a swastika or hammer & sickle ominously engulfing North America. In Moore's film, the threat is symbolized by seeping maple syrup. Another almost-laugh-out-loud gag has Candy's group wrongly heading to Toronto after a Mountie (Steven Wright) explains that the capital of Canada is, in fact, Ottawa, but the Americans refuse to believe such foolishness.

But, I suspect, in writing the script Moore had dozens of funny ideas like these and, to a large extent, reverse-engineered his story, building scenes around the funny bits rather than the other way ‘round. The intended laughs come in all shape and forms, from broad physical slapstick to unfunny movie references (Honey sculpts the CN Tower out of mashed potatoes) to political humor about Canada's nationalized health care. But it's all just tossed in together, like an improvised salad. In Russians, for instance, much of the humor is derived from how carefully-crafted scenes snowballs into new ones that create more tension and conflict, more problems for the film's characters to overcome. In Strangelove, the efforts of Group Capt. Lionel Mandrake (also Sellers) to get the "recall code" from mad Gen. Ripper (Sterling Hayden) slowly builds from reason to desperation. But in Canadian Bacon everything is scattershot; all of Candy's scenes seem disconnected even when they're not. And while Strangelove cuts between several different sets of characters in different locations like here, everything connects to everything else. In Canadian Bacon, scenes with the President feel almost like a different movie cut with the material featuring Candy and the others.

Moore maybe thought it amusingly ironic to cast the Toronto-born Candy as a Canada-hating American, but the much-missed comedian is so emphatically, emblematically Canadian the casting only contributes to the picture off-balance feel. The actors, for the most part, are fine, and like Moore are giving it their all. As with (Canadian) Leslie Nielsen, Rip Torn was a latecomer to film comedy, and was so good at it that it occurred to me he could've been even better than George C. Scott in Strangelove; it's too bad he has nothing like Scott's memorable lines from that film. Alda, Candy, and the others all give professional, perfectly fine performances, but the screenplay gives them little to work from.

(Curiously, Wallace Shawn is prominently billed as the Canadian Prime Minister, but unless I missed something only appears fleetingly at the end, in a freeze-frame image with no lines. Presumably Moore cut all his scenes, but then why include him at all?)

Moore directed, produced, and wrote the film solo, but really needed an experienced screenwriter to help him smooth out the script. An extra set of eyes on the story and its characters would have helped its inconsistent tone, not just in terms of its shifting comic sensibilities but also knowing when to pull back a bit. There's a thin line between biting satire and mere silliness, especially when the comedy crosses all lines of credibility and becomes unbelievable on any level. That's especially true of the film's postscript, text explaining the fates of its various characters, jokes on the level of "A horse walks into a bar..."

Licensed from MGM, MVD Visual's Blu-ray of Canadian Bacon presents the film in its original 1.85:1 wide screen aspect ratio, and is a decent enough transfer, and the LPCM 2.0 stereo surround audio is fine. (A Spanish Dolby Digital 2.0 track is also offered, along with subtitles available in English, French, and Spanish.) Region "A" encoded with no Extra Features

Mildly amusing but a misfire neither fish nor fowl, Canadian Bacon is for die-hard Michael Moore fans only. Rent It.