Atom Egoyan's Exotica (1994) is a puzzle film of sorts, in some respects similar to Paul Thomas Anderson's later film Magnolia (1999). Both pictures introduce a gaggle of people midstream in their lives. They mostly appear disconnected from one another, and initially it's unclear what we in the audience are supposed to make of them. How these disparate characters eventually converge is part of what makes both films interesting, but that's not really what either is about. Nevertheless, it's best to approach these films cold, with no knowledge of what their stories are about ahead of time. You definitely don't, for instance, want to visit Wikipedia's entry on Exotica beforehand. While its plot synopsis is undeniably accurate, it's from the post-viewing perspective that gives absolutely everything away.

Exotica received rave reviews and did good (arthouse) business, but having been in made in the mid-1990s, its release didn't coincide well with the home video revolution. It was out of print for years in its native Canada, so Criterion's revisit on Blu-ray is most welcome. Also welcome, though almost perversely underemphasized, is that their Blu-ray also contains a second feature film by Egoyan, Calendar (1993), as well as a couple of short films by the writer-producer-director. 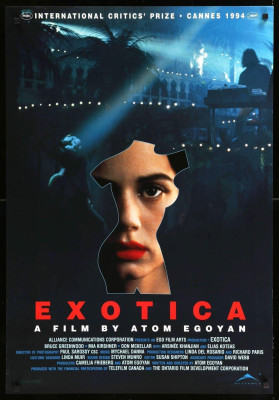 Not wanting to reveal anything significant, this review will describe only the introductory scenes. Pet shop owner Thomas (Don McKellar) flies back into Canada, scrutinized by customs officials (David Hembien and Calvin Green). Elsewhere, Francis (Bruce Greenwood) visits Exotica, a strip club where Christina (Mia Kirshner) regularly performs private dances for him. They seem to have an unusual, intimate client-performer relationship, which bothers the club's DJ, Eric (Elias Koteas), conflict referred to Exotica's big sister-like owner, the very pregnant Zoe (Arsinée Khanjian, Egoyan's real-life wife). Francis also has an unusual relationship with Tracey (Sarah Polley), a niece he hires to "babysit" while he's visiting Exotica, even though Francis doesn't seem to have any children. (Egoyan deliberately creates a kind of red herring in her introduction, suggesting falsely that she's a child prostitute.) From early in the film, there are also flashbacks or visions of Eric and Christina some time earlier, wandering through a field of tall grass with others walking in the distance.

In the U.S., Exotica was rather absurdly advertised as "an erotic thriller" and, incredibly, some reviewers even likened it to Showgirls. (Showgirls!) However, like its labyrinth plotting, sex is at best parenthetically part of Exotica. The strip club setting unavoidably necessitates women in various gyrating states of undress, but Egoyan's interests mostly lie elsewhere. Like his subsequent masterpiece, The Sweet Hereafter (1997), Exotica is, at its most memorable, concerned with tragedy, loss and grief. The basic theme of The Sweet Hereafter is that, when faced with cataclysmic tragedy, we search for meaning (and, frequently, blame) when sometimes, perhaps always, there is no meaning, there are no answers.

In Magnolia, Anderson points to the randomness of the universe and its freakish coincidences that can be either good or bad but regardless are unavoidable. The core of Exotica points to themes and asks questions similar to both Anderson's film and Egoyan's subsequent one, if more intellectually and dispassionately, or maybe more deeply repressed in his set of characters.

Reportedly Egoyan first became interested in the ritualistic nature of exotic dancers and their clients, each bound by the rule that actual touching was strictly forbidden. In Exotica, however, neither of the two relationships depicted could be described as erotic, and the primary one is, in its own strange way, therapeutic if also doomed and ultimately destructive. Some of the loss than permeates Exotica is brought on by death, by no means is it the only sort, as its characters struggle with personal relationships, lovers and familial types, that have ended but which characters struggle to reconcile or long to reconnect. For others grief is found in loneliness and fear of forever being along or never achieving their goals or, alternatively, perhaps aiming too low.

Likewise, though Egoyan extensively research such places, the Exotica club is singularly unreal, hypnotic in its way, though like a fantasy image men tend to have of such places. Certainly the one or two times I visited one I found the environment oppressively sleazy and singularly unerotic. Like Anderson's collaborative relationship with Aimee Mann, integral to Magnolia, Egoyan uses music similarly if less extensively, chiefly Leonard Cohen's "Everybody Knows."

Technically a supplement but really a second feature, Calendar has but three main characters, never identified by name: a photographer (played by Egoyan), his girlfriend (Arsinée Khanjian), and a driver (Ashot Adamyan) escorting the pair across the Armenian countryside to historic churches being photographed for a calendar. The 74-minute film cuts between three locations: Stationary shots (as if through the photographer's camera lens, mounted on a tripod) and held-held Super-8 video footage taken in Armenia; footage of the director in his apartment in Toronto, wining and dining various women who, in turn, all excuse themselves to use the telephone; and shots in the photographer's office where the completed calendar hangs on the wall.

The gist of the film is that the driver becomes more like a guide, whose long conversations with the girlfriend in Armenian, which the photographer cannot speak, spark tensions between the couple, the photographer increasingly worried that she's attracted to the driver and vice-versa, though his self-destructive, passive-aggressive behavior, surly yet dispassionate) toward them all but ensures a break. What some might find meditative and hypnotic I found interesting but overlong by 20-30 minutes.

Criterion's Blu-ray of Exotica presents the film in a fine 1.85:1 widescreen transfer done in 4K utilizing the original 35mm camera negative. The original 2.0 surround was transferred from the original 35mm magnetic tracks. Liner notes encourage viewers "to enable Dolby Pro Logic decoding on your receiver to properly play the Dolby 2.0 surround soundtrack." Optional English subtitles are provided. The transfer of Calendar is less impressive. It's not clear whether this 1.37:1 standard screen transfer was (partly) shot in 35mm or 16mm, but the film portions of the show are on the soft side, and the colors are rather dull. Further, no subtitle options here and no chapter stops. (It would have been interesting to have a subtitle option for the long stretches of untranslated Armenian dialogue, and the various languages the photographer's dates have on the phone.)

In addition to the aforementioned Calendar (which includes an "introduction" that really should be watched after you've seen the film), supplements include an audio commentary with Egoyan and composer Mychael Danna, and a very interesting conversation with Egoyan and actress (and filmmaker) Sarah Polley. Three short films are included: Peep Show (1981), En passant (1991), and Artaud Double Bill (2007). There's audio from the 1994 Cannes Film Festival press conference for Exotica, and finally a liner essay by filmmaker Jason Wood.