He Who Must Die

I'm not sure what I expected of He Who Must Die (Celui qui doit mourir, 1957), a French film directed by Connecticut-born Jules Dassin. Something like Dassin's other signature films, movies like Rififi (1955) or Topkapi (1965), perhaps? Or maybe I was expecting a plot along the lines of Stanley Kramer's later The Secret of Santa Vittoria (1969), about a remote village in Nazi-occupied Italy hiding its valuable cache of wine. The hardly apt plot synopsis on Wikipedia describes He Who Must Die in similar terms, as being about a post-World War I Turkish-occupied Greek village staging a Passion Play, inspiring a rebellion, which misses entirely what the movie is really about.

Instead, the picture is one of the best explorations of Christian hypocrisy and corruption I've ever encountered. The opposite is also true: far better than Christian epics like The Greatest Story Ever Told (1965), He Who Must Die really puts Christian faith to the test, in universal, real-world practical terms. Adapted by blacklisted writers Dassin and Ben Barzman from Nikos Kazantzakis's 1954 novel Christ Recrucified, the property doubtlessly appealed to Dassin and Barzman for its parallels to the blacklist, and maybe to its French producers because it raises issues similar to what France experienced under the Nazi occupation, and the accompanying complicity of the Catholic Church.

Regardless, the film was decades ahead of its time, still plays very modern now, and in today's America with its pretzel-twisting, at times awesomely contradictory "Christian values," it resonates more profoundly than ever. It's one of 2022's great discoveries on Blu-ray, a movie that fully deserves to be much more widely known. 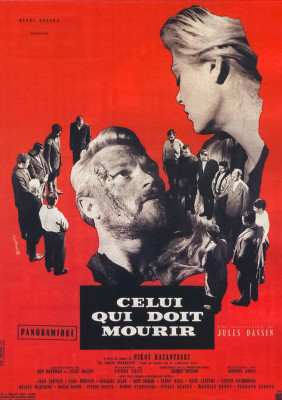 In a Turkish-occupied but otherwise prosperous Greek village, its community plans the staging of its Passion Play, held every seven years. The village elders, led by Priest Grigoris (Fernand Ledoux) and Patriarcheas (Gert Fröbe), who owns most of the land and industry, have chosen widowed Katerina (Melina Mercouri), the town's prostitute, to enact the part of Mary Magdalene; postman Yannakos (René Lefèvre) and Patriarcheas's son, Michelis (Maurice Ronet), to play apostles; butcher Panagiotaros (Roger Hanin) to play Judas; and illiterate, stuttering shepherd Maniolos (Pierre Vaneck) as their Jesus. Michelis is in love with ailing Mariori (Nicole Berger), but the two lovers seem destined to marry soon. Indeed, all seems well as even the village's Turkish military governor, "the Agha" (Grégoire Aslan) is too busy living it up with his boy-lover to pay the Greeks much notice.

But then several hundred starving refugees led by Priest Fotis [alternatively: Photis] (Jean Servais), from a village burned to the ground by the Turks, stumble into the town square, begging for food and shelter. Though the village is inclined to help, Priest Grigoris flatly refuses to accept them, and when a young refugee woman collapses and dies of starvation right in front of everyone, Grigoris knowingly, falsely claims the dead woman has cholera, and that the "dirty" refugees might all be contagious. That does the trick; everyone scatters.

Given the bum's rush, Fotis leads the refugees to an uncultivated patch of land up a nearby mountain, declaring they shall build a new village right there, within eyeshot of the prosperous village below. But they can do little beyond moving rocks around, and everyone continues to starve and die.

Wracked by collective guilt, several villagers tapped for the Passion Play begin echoing their assigned roles, investigate. At first independent of one another, Katerina, Yannakos, Michelis, and Maniolos quickly realize none of the refugees have cholera at all, but are simply dying of hunger and exposure. They appeal directly to Grigoris and Patriarcheas but the priest, especially, again adamantly refuses. "But they'll starve to death," warns Maniolos, to which the priest barks back, "That's God's business, not yours!" Clearly, the emotionally distant Grigoris feels threatened by Fotis, a godlier, less authoritarian priest better connected with a more devoted flock, though back on the barren hillside Fotis can offer little practical advice.

Increasingly desperate, Yannakos and Michelis conspire to rob Michelis's father's well-stocked storehouse of food and grain, while Fotis compels Maniolos to address the entire village at a local festival (where, again, food and drink flows freely). Maniolos is reluctant because of his stammer, but Fotis assures him that God will free him of that. Grigoris, for his part, happily allows the handsome but timid shepherd to address the villagers, assuming the stammer will only elicit laughs. (Indeed, in retrospect, Grigoris's choices for the Passion Play seem sadistic, chosen to cause maximum embarrassment.) Instead, miraculously, Maniolos's stutter does disappear completely; this and his passionate speech inspires nearly the entire village to again want to help the refugees, forcing Grigoris and Patriarcheas into taking extreme measures.

While the film's allegorical aspects are obvious, dramatically all of works. In ‘50s-‘60s religious epics, the teachings of Christ are solemnly, abstractly lectured to movie audiences; in The Greatest Story Ever Told, Max von Sydow's Jesus works through the New Testament's Greatest Hits with enormous gravitas, and His apostles and anyone else within earshot all look terribly impressed (except for the Romans, of course). In such films it's rather fascinating to watch how much effort is put into varying those awed expressions hearing the word of God or merely being in Christ's presence. (I give Victor Mature top prize in that category.)

But in He Who Must Die, all of these same ideals are put in practical terms. Men, women, and children are literally starving; they need help. Plenty of food is available. Capitalists symbolized by Patriarcheas are concerned about the long-term effects of caring for 300 people on his personal wealth, while Grigoris sees Fotis immediately syphoning off at least half his influence and power. Grigoris preaches one outrageous lie after another -- it's God who gets to decide who's rich and who stays poor, he insists. When words from the Bible contradict his arguments, he becomes physically violent. But Maniolos and others gradually see the truth: he's simply a bad priest, perverting the fundamental teachings of Christ. That the village is so prosperous, with plenty of food everywhere, while babies starve but a few hundred yards away -- at the priest's insistence -- is obscene.

The acting by familiar French and other continental talent is excellent throughout. Dassin's fixation with Melina Mercouri (whom he'd later marry) pays off here; she's perfectly cast and believably on the cusp of middle-age (she was about 36 at the time). Conversely, Gert Fröbe is made-up to appear much older, about a man of 70, though he was only in his early 40s, not much older than Mercouri. At first, I wondered about the fair-skinned German pulling off a French-speaking, rural Greek patriarch but he does. Actors like Ronet and Servais seemed to be everywhere in French cinema for decades; both come off particularly well. Nicole Berger, of Shoot the Piano Player is lovely but has limited screentime. Tragically, she died in a 1967 car crash, two months before Françoise Dorléac met a similar fate.

Dassin's direction is masterly; the production's disparate elements all come together seamlessly, from big crowd scenes with Greek extras, French speaking parts, etc. There are eight or nine major characters all of whom make a strong impression. The allegorical aspects are plain to see yet undeniably effective and believable. The opening titles credit far more production people than was usual for this time but the film that follows clearly demonstrates all that work and cooperation paid off handsomely and the acknowledgments are well deserved.

Licensed from MGM, Kino's Blu-ray of He Who Must Die presents the film in its original black-and-white (2.35:1) CinemaScope aspect ratio. The image is excellent throughout and the film is uncut. The DTS-HD Master Audio (mono) is fine, though the English subtitles seem a bit off at times, with anachronistic or inapt translations at times. Region "A" encoded.

I was fairly gobsmacked by the film's screenplay and execution. Way ahead of its time and deserving to be far better known, He Who Must Die is one of the year's best Blu-ray releases. A DVD Talk Collector's Series title.