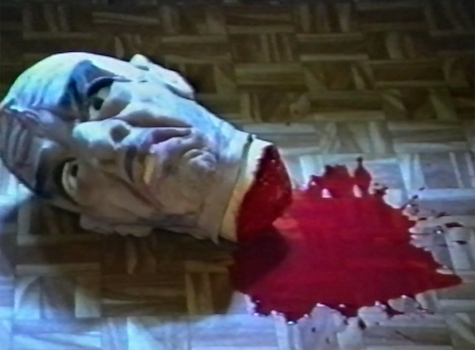 AGFA and Bleeding Skull have teamed up to release a shot-on-VHS slasher duology that should warm the cockles of any gorehound's heart. The memorably titled Fuck the Devil and Fuck the Devil 2: Return of the Fucker were made by a German twenty-year-old, Michael Pollklesener, with his family and friends in 1990 and '91.

In a nutshell, these short films concern an evil spirit who is unleashed when someone pops a haunted copy of Sam Raimi's Evil Dead II into their VCR. After trying to possess a baby, the spirit leaps to a rat-tail-sporting, Evil Dead II T shirt-wearing teen (played by Pollklesener, naturally). The teen dons a creepy old man mask, becomes "The Fucker," and proceeds to murder everyone in his apartment building.

Effects are gooey and homemade, showing a fair amount of scrappy ingenuity even if they never look real. The visual style is pure home movies, but the apartment building has an odd blandness that kinda suggests Andrzej Żuławski's Possession. The building's stone basement particularly adds disconcerting spooky ambience. The soundtrack is full of mock-John Carpenter noodling on a Casio, which honestly sounds pretty hip these days.

Much like the Evil Dead franchise, the second Fuck the Devil short is the faster, funnier, and more gonzo effort. The "Fucker" is beheaded at the end of the first film, and the sequel has a lot of fun with his noggin detaching and re-attaching. He can fly too in this one. The kills are more senselessly brutal but in ways that provoke shocked laughter. Wes Craven's original A Nightmare on Elm Street is referenced a few times, with the Fucker showing up in a sleeping victim's bathtub and a Freddy Krueger stand-in getting bested by the more powerful Fucker spirit.

AGFA's disc presents both shorts in new 30-minute "director's cuts" that add a few shots of forgotten gore but mostly trim unnecessary shoe leather while maintaining the awkward homemade energy of the edited-on-VCR originals. Those original, slightly baggier cuts are included as bonus features for folks who demand sloppy purity of their homemade camcorder flicks.

Delightfully gross and silly, the Fuck the Devil double feature will conjure plenty of nostalgia for horror fans who came of age in the VHS era. 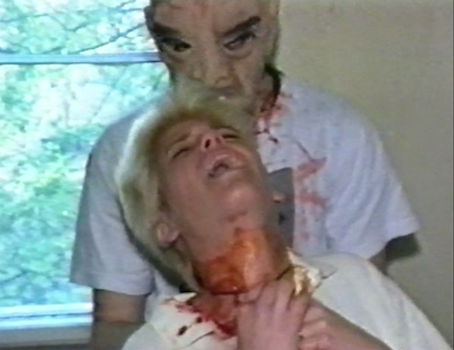 The Blu-ray
Fuck the Devil + Fuck the Devil 2: Return of the Fucker is packaged with reversible cover art, featuring the titles either censored or uncensored. A booklet is included with some of the original VHS artwork, some stills, and liner notes by Joseph A. Ziemba. A limited-edition embossed slipcover is available exclusively at the Vinegar Syndrome website.

The Video and Audio:
Shot on VHS-C and edited on VCRs (with a little digital clean-up in 2022), these AVC-encoded 1080p 1.33:1 presentations are unsurprisingly less than library quality. For old camcorder footage, the whole thing has held up pretty well, with only a few noticeable line dropouts here and there. Short of using one of those AI programs to boost the resolution, there's not much that could be done here -- and you wouldn't really want it done anyway. Shots of a TV showing clips from Evil Dead II have been blurred out, presumably for copyright reasons. The German DTS-HD MA 2.0 mono mix is predictably lo-fi, with a mixture of noisy on-board mic recordings, some obvious post-synched dialogue and growling demon noises, and the presumably cassette-recorded music by Ingo Kalisch. It totally works, but it's not technically impressive. Both English and German subtitles are offered.

Final Thoughts:
One imagines that the making of the Fuck the Devil shorts might look something like a German variation on that classic doc on homemade horror, American Movie (RIP Mike Schank). The fledgling filmmakers' mixture of unabashed movie love and no-budget ingenuity make these silly gorefests a fascinating and fun sit for genre freaks. Recommended. 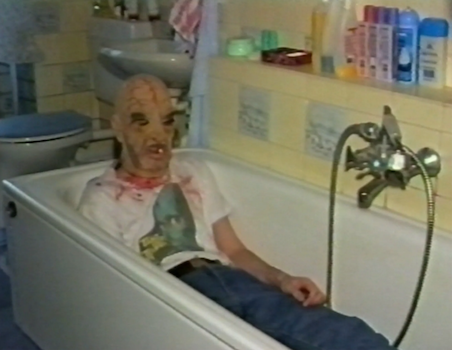