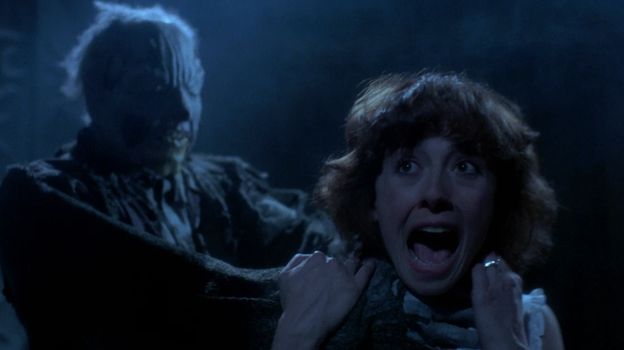 The 1979 film The Amityville Horror was a fairly junky haunted house flick that yearned for the prestige of The Exorcist. Now that literally dozens of even junkier horror flicks have taken on the "Amityville" brand, it feels like the classiest of the bunch -- but that's not necessarily a high bar to clear.

Seven of the eight Amityville flicks made in the pre-remake era have seen release on Blu-ray already. Shout Factory put out the original trilogy that made it to theaters, while Vinegar Syndrome put out the four series entries from producer Steve White which focus on haunted objects removed from the wreckage of the original house that then begin haunting other places. (The one about a clock, It's About Time, is from Hellraiser II director Tony Randel and is surprisingly effective.)

Now, one of Vinegar Syndrome's partner labels, Canadian International Pictures, delivers the missing fifth entry in the series, The Amityville Curse (1990), completing the initial 8-film run. Based on a novel by Hans Holzer (whose work previously inspired Amityville II: The Possession), The Amityville Curse hits the right mix of camp and dread to make for an entertaining straight-to-video fright film. Director Tom Berry -- who has become a Hallmark romance movie mogul with over 400 producing credits -- has a surprisingly deft hand with mood here. Sadly, the script sags and drags in the mid-section, but the bookending set-up and payoff deliver the genre goods.

Curse revises the established lore a bit. The haunted house in question is now a former rectory which belonged to a priest bizarrely murdered while hearing confession (Jan Rubeš, from Witness). The bloodied confessional and some other ceremonial bits and bobs are stashed in the rectory basement and sealed away. After a dozen years pass, psychologist and would-be real estate investor Marvin (David Stein) convinces his friends to buy and fix up the priest's old house with him. His wife Debbie (Dawna Wightman) is a little bit psychic and catches some bad vibrations from the house, but Marvin plows ahead nonetheless.

The film proceeds with Marvin and Debbie moving in with the new investors: buttoned-up Frank (Sons of Anarchy's Kim Coates) and his hot artist wife Abigail (Conan the Barbarian's Cassandra Gava), plus the handy, classical music-loving Bill (Anthony Dean Rubeš). They start fixing the joint up and slowly discover how weird this building is. A kooky old woman (Helen Hughes) comes by to warn them of the house's history. Debbie is haunted by visions of a ghost teenager, and she dreams about spooky stuff in the basement. Soon, she's not the only one seeing stuff: Abigail has a paranormal experience in the bathtub that is both gross and haunting, making the most of the film's low budget effects.

Near the end, the flick pivots from The Haunting- and Exorcist-style spookiness to slasher-style stalk-and-kills. The tonal shift is welcome, giving the last act of the film an immediacy lacking from the flabby midsection. The Final Girl chase brings to mind classic setpieces from the original Halloween and Friday the 13th Part 2, even if it's not nearly as iconic.

In the realm of straight-to-video thrillers, The Amityville Curse is surprisingly solid. It meanders too much to fill out the running time, but the performances and direction are more nuanced and textured than this kind of cash-in calls for. It's certainly exponentially better than the recent spate of zero-budget trash to purloin the "Amityville" name (Amityville Karen, Amityville Clownhouse, Amityville Shark House, etc.). 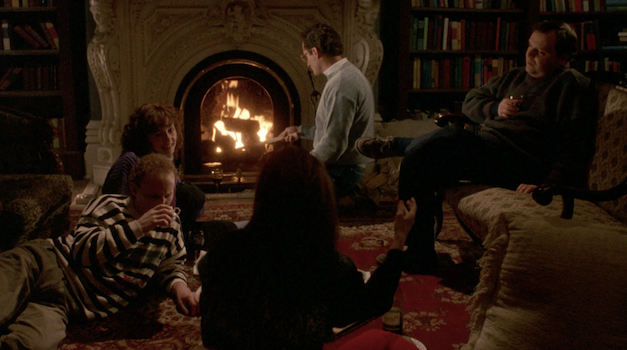 The Blu-ray
The Amityville Curse is packaged with reversible cover art and a booklet featuring an interview with Hans Holzer's daughter Alexandra and an Amityville Curse edition of the Rick Trembles' Motion Picture Purgatory comic series. The limited edition slipcover has already sold out at the Vinegar Syndrome website.

The Audio:
A nice clean DTS-HD MA 2.0 with a well-rounded sound that provides a spooky atmosphere and delivers dialogue and effects clearly.

- A well-researched and nicely paced historical-critical discussion of the flick and the Amityville series.


Final Thoughts:
Did I enjoy The Amityville Curse more than the original Amityville Horror? Yeah. Kinda. (I don't actually have much love for that one, to be entirely honest.) The flick's not without its flaws, but I thought it delivered on the spooky atmosphere and thrills promised by its premise. Recommended. 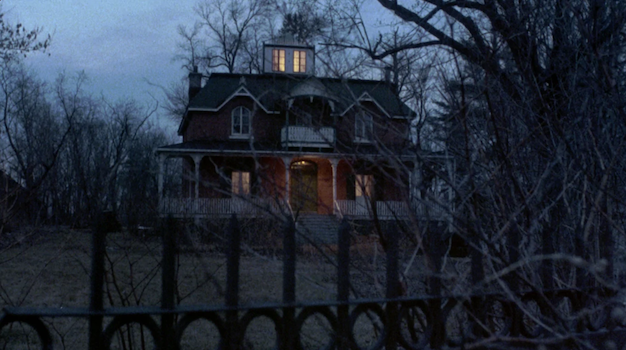