It took 44 years, but here I've finally gotten around to seeing Irvin Kirshner's Eyes of Laura Mars (1978), whose creepy poster and effective coming attractions trailer long intrigued me. Though often described as a neo-noir, the movie is really a slick, big-budget Hollywood stab at the giallo genre, the visually stylish, intricately-plotted Italian thrillers, often-gory whodunits, that flourished earlier in the decade. The story was John Carpenter's first major studio credit, though it was altered by others so whether he, later writer David Zelag Goodman (Straw Dogs) or others were consciously drawing from Italian giallo is unclear.

Visually, Eyes of Laura Mars is enormously effective, though let down profoundly, house-of-cards style, by its ruinous ending. Where the best giallo are puzzles that neatly and cleverly come together at the end, Eyes of Laura Mars has scads of intriguing-looking pieces that, in the final analysis, just don't fit together. Still, the weak ending alone shouldn't dissuade viewers as the rest of the film has a lot to offer. 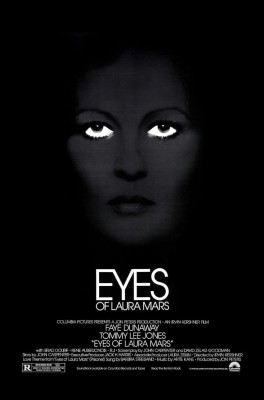 Faye Dunaway plays the titular character, a celebrated, Annie Leibovitz-type photographer (though Leibovitz herself would not gain a similar level of fame for several more years). At a chic press party tied to the release of Mars's latest coffee table book of photographs, word spreads of the murder of one of Mars's associates, stabbed in the eyes with an ice pick. Detectives Lt. John Neville (Tommy Lee Jones) and Sal Volpe (Frank Adonis) are on the case.

Mars, delving further into her fascination combining high fashion with graphic violence (based on the work of Chris Von Wangenheim), resumes her current fashion shoot, including a visually arresting staged multi-car accident and cat-fight among a group of mink-wearing models in the middle of Columbus Circle. Also present are her agent, Donald Phelps (René Auberjonois) and driver, shady ex-con Tommy Ludlow (Brad Dourif), while Mars's ex-husband, alcoholic loser Michael Reisler (Raúl Juliá), reappears as a chief suspect in the murder.

More Mars associates are similarly murdered, with Mars herself all the while experiencing strange visions; gradually she realizes that, somehow, she's able to see in first person through the killer's eyes the murders as they occur. Naturally, the police don't believe her, though through the investigation she becomes romantically involved with Neville.

As Dark Star (1974) was being readied for release, Carpenter submitted an 11-page treatment, "Eyes," to that film's producer-distributor, Jack H. Harris. Harris partnered with celebrity hairdresser-turned-producer Jon Peters, who in turn thought it ideal as a vehicle for his then-girlfriend, Barbra Streisand. Streisand begged off (though she did perform "Prisoner" on its soundtrack) and the part was recast with Dunaway, she having recently won an Academy Award for Network (1976). (Dunaway also played a similar character in René Clément's giallo-esque La Maison sous les arbres, 1971.) She's quite good in the part.

Eyes of Laura Mars has all the core ingredients for a classic Hollywood-made giallo but the rewriting -- including, apparently, a terrible improvised monologue Jones created for his character -- critically damage the film in its final reel. Many of the best giallo from Italy have intricately structured plots, often featuring inexplicable aspects that only make sense -- but do finally make sense -- as revealed during the climax. The problem with Eyes of Laura Mars isn't just that the identity of the killer is disappointing, predictable (if illogical) and even ridiculous, but rather that the picture's major innovation, of Mars experiencing the killings through the murderer's eyes, ultimately serves no purpose. Her extraordinary visions go unexplained and never once allow her to prevent a murder or help her identify the killer or even thematically link her to the killer in some way. What happens in the story and to its characters would not change in the slightest without it.

The look of Eyes of Laura Mars is, however, another matter. Shot by cinematographer Victor J. Kemper (The Friends of Eddie Coyle, Dog Day Afternoon), the movie gorgeously captures late-1970s pre-gentrified New York City, particularly the world of celebrity photographers and the fashion scene. That aspect of the film plays both chic and authentic at once. Dunaway was dating photographer Terry O'Neill, who coached her for the role, while Helmut Newton and Rebecca Blake created the photos credited to Mars, with real models and former models further adding to the verisimilitude. Other than Columbus Circle, the film also uses less-familiar locations in visually interesting ways, particularly Soho streets and a presumably long-gone pier in Lower Manhattan.

Eccentric, eclectic director Irvin Kirshner had an unremarkable film career, though Eyes of Laura Mars did impress George Lucas, who hired Kirshner for The Empire Strikes Back partly based on his work here. Originally a still photographer and documentary filmmaker, Kirshner got into television as one of the staff directors of The Rebel, Nick Adams's offbeat Western TV series. Kirshner segued into feature films with mixed results, with highpoints like Hoodlum Priest (1961), A Fine Madness 81966), and The Flim-Flam Man jumbled with forgettable junk like S*P*Y*S (1974). There're no Kirshnerian style or recurring themes I can discern.

Licensed from Sony and originally released by Columbia Pictures, Kino's Blu-ray of Eyes of Laura Mars looks fantastic in its 1.85:1 widescreen transfer. The DTS-HD 2.0 Master Audio is likewise impressive for a late-period monophonic big-studio release, supported by optional English subtitles. Region "A" encoded.

Supplements consist of material repurposed from an earlier DVD edition. They include an audio commentary by director Kirshner (who died in 2010); a vintage behind-the-scenes featurette (the kind they used to show on network television after prime-time movies); a short featurette from the DVD called "Eyes of Laura Mars Photography"; a trailer, TV and radio spots.

It's too bad that Eyes of Laura Mars's wet dishrag of an ending so disappointed audiences and reviewers that it sullied the entire viewing experience. Most of the film is quite stylish and interesting and, overall, still Recommended.