"Not even you could dream up a story like this!"

Even measured against the low bar set by independently made horror films of the early ‘70s, Doctor Death, Seeker of Souls (1973) is quite bad, but also so loopy that it has a dogged charm. John Considine's amusing performance as the title character is equal parts Vincent Price and Dwight Schrute, while producers Sal Ponti (who wrote the script) and Eddie Saeta (who also directed) must have called in some favors, as they cast a dizzying mix of talent, most memorably and oddly Three Stooges front man Moe Howard in his final film appearance. 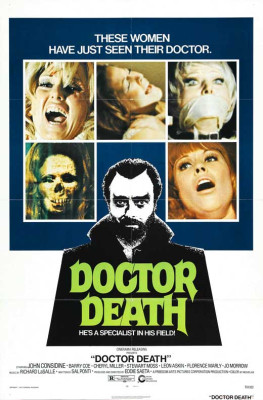 Laura (Jo Morrow), the beautiful, beloved wife of Fred Saunders (Barry Coe), dies in hospital, despite the best efforts of his doctor friend, Greg Vaughn (Stewart Moss), to save her. She has promised to return to him, somehow, someday, though whether this is something she stated before dying, is communicating here intentions telepathically, or merely wishful thinking on Saunders's part is unclear.

Regardless, Saunders is too impatient to wait it out. He visits a series of phony mediums (media?) and the like, hoping to contact Laura, whose lifeless body now resides in an unlocked tomb, the phoniest soundstage set this side of Plan 9 from Outer Space. Eventually Saunders meets Tana (Florence Marly), an agent-lover representing the mysterious Dr. Death (Considine).

At his mansion, Dr. Death demonstrates to a small group of potential customers his amazing ability to transfer souls from the dead into a new corpse, reanimating the latter back to life. The soul of an "ugly" woman, a burn victim, is successfully transferred into the body of a luscious babe (Sivi Aberg, former Miss Sweden). The process does have one slight drawback: Dr. Death or his mute, scarred assistant, Thor (Leon Askin), must murder the party of the first part to facilitate the soul-transfer to the party of the second part.

This initially horrifies Saunders, but soon he agrees to Dr. Death's $50,000 fee. However, Laura's body is inexplicably resistant to the notion of receiving a new soul. Saunders has second thoughts, but Dr. Death becomes obsessed with finding a soul powerful enough to enter Laura's corpse, prompting a mad killing spree in Los Angeles's San Fernando Valley.

Doctor Death, Seeker of Souls is notably quirky, self-consciously campy at times. At the demonstration, when Dr. Death explains that he must murder the burned woman, he saws her in half: "In so doing why not be entertaining at the same time?" he cheerfully asks. "Being an amateur magician..." When Saunders coughs up the 50Gs, Dr. Death explains that he discovered his soul-transferring ability hundreds of years ago, and (in black-and-white flashbacks) has himself been transferring from one body to another, including a people of other races, a child, and even a woman. (The film is clearly interested in the concept of gender-swapping, and referenced several times over the course of the film.)

The Three Stooges were all but kaput following Middle Stooge Larry Fine's career-ending stroke in January 1970. Moe eventually went on a successful tour of speaking engagements discussing his career, and made several memorable appearances on The Mike Douglas Show, recreating several famous Stooge routines. Moe's wife, Helen, was present during those tapings, and is seated next to Moe in Dr. Death. He doesn't do much in the film, but comes off well enough, as a kind of seasoned character bit player in the Billy Benedict mode.

Actors like Coe, Moss, Morrow, and Cheryl Miller (as Saunders's secretary) had busy careers on television, small roles in big films and bigger role in smaller ones. One imagines none were particularly proud of Doctor Death. Czech actress Florence Marly made a number of films in Europe, including René Clément's excellent The Damned (1947), but is primarily remembered today for Tokyo Joe (1949), a terrible Humphrey Bogart vehicle, and Queen of Blood (1966), the low-budget but imaginative Curtis Harrington film with Marly memorable as the blood-drinking alien queen of the title. She has a substantial role in Doctor Death, her last film role of any note.

Viennese actor Leon Askin had been quite amusing as the continually irritated General Burkhalter on Hogan's Heroes, but that sitcom ended in 1971, and parts for fat, comical Nazis were in short supply thereafter. In Doctor Death, Askin plays "the Tor Johnson part," "Lobo" in all but name. He's fat with a big facial scar and, unaccountably, medieval clothing, and has no lines, regrettable since his clipped, carefully enunciated Austrian-accented English was his primary appeal. In one hilarious scene roly-poly Askin waddles down a hill after one of Dr. Death's victims, a sprinting 20-something woman. He remained in Hollywood for another dozen years, returning to Vienna in his old age. He launched an amusing website about his career, which continued until shortly before his death in 2005 at age 97.

Mostly, though, it's Considine's committed, gleeful, self-amused performance that carries the film. The picture goes off the rails in its last act, with Dr. Death on a killing spree, stubbornly determined to find the right soul to penetrate the dead wife's body, long after Saunders has given up on the idea, wants no part of Dr. Death's magic, and has even found a new girlfriend (Miller). Curiously, the writers never even considered the likelihood that Laura was embalmed, which one imagines would complicate any resurrection and might have added a little twist at the end.

Previously released on DVD and, in 2016, on Blu-ray as a limited edition, Scorpion's latest release of Doctor Death, Seeker of Souls sources the same 2015 transfer from the original negative which looks very good throughout, with a sometimes hissy but otherwise fine DTS-HD Master Audio (mono) soundtrack. Optional English subtitles are provided. Region "A" encoded.

Apparently, the earlier Blu-ray did not include an audio commentary featuring star John Considine, but all the other extras are repurposed from that release. They include an on-camera interview with the actor, and a separate video interview with Steve Saeta, son of director Eddie Saeta. There's also an amusing "introduction by Doctor Death" with Considine quoting from a line repeated at least a dozen times in the movie. Also included is a TV spot.

Doctor Death, Seeker of Souls is profoundly silly but quite entertaining when in the right frame of mind, viewing-wise. Recommended.