(Too) loosely adapted from the 1941 hit play by Joseph Kesserling, Frank Capra's movie version of Arsenic and Old Lace, filmed later in 1941 but contractually not released until September 1944, is fondly regarded by critics and audiences. It even ranked #30 on the American Film Institute's list of "100 Years...100 Laughs," but the movie is almost a complete bust. Frenetic instead of funny, it offers a small handful of amusing performances, but Cary Grant is downright awful in the lead, and the adaptation is wrongheaded in myriad ways, at times perversely so. Its mostly positive reputation seems to at least partly stem from the reputations of Capra, the cast, and the fact that Kesserling's play is still among the most popular among community theater groups and high schools, and probably therefore more frequently seen by audiences normally averse to old black-and-white Hollywood movies.

Regardless, Criterion's new Blu-ray, licensed from Warner Bros., offers a fine presentation of the film with notably limited but worthwhile extra features. 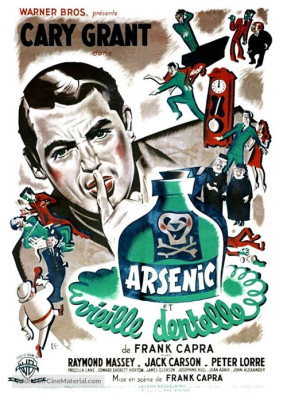 In Brooklyn on Halloween, theater critic Mortimer Brewster (Grant) marries Elaine Harper (Priscilla Lane), a minister's daughter who lives next-door to Mortimer's elderly aunts, Abby (Josephine Hull) and Martha (Jean Adair), sweet spinsters who look after their eccentric nephew Teddy (John Alexander), Mortimer's brother, who believes he's President Theodore Roosevelt, blows a bugle at all hours and charges up "San Juan Hill," the family staircase. Mortimer plans a quick visit with his aunts before whisking Elaine off to Niagara Falls for their honeymoon, but he inadvertently discovers the corpse of an old man hidden in the family window seat. To Mortimer's shock, a slightly embarrassed Abby and Martha confess to poisoning him, one of a dozen "mercy killings" they've cheerfully done to lonely old men through the years as intended acts of kindness, gleefully but reverently burying their bodies in the cellar.

As Mortimer tries to make sense of all this, his long-estranged and clearly insane brother, Jonathan (Raymond Massey) turns up, accompanied by (unlicensed) plastic surgeon Dr. Einstein (Peter Lorre). They're on the lam after Jonathan's own globetrotting killing spree of a dozen more victims. Mortimer's brand-new marriage threatened from several directions at once, he enlists sanitarium director Mr. Witherspoon (Edward Everett Horton), hoping to commit Teddy (apparently to cover his aunts' tracks), tries to steer clear of the volatile Jonathan, all the while while avoiding the suspicions of the local police, particularly budding playwright Officer Patrick O'Hara (Jack Carson) and, later, cranky police Lt. Rooney (James Gleason).

The original farcical black comedy had been a huge hit, finally closing in March 1946 after an impressive 1,337 performances. It toured endlessly even before it closed, was a dinner theater perennial for decades, and repeatedly adapted for radio and, later, television. It was revived on Broadway in 1986 and there was even a Russian film version.

The original play was headlined by horror movie icon Boris Karloff, who also invested in the production, as Jonathan Brewster. It was a major triumph for the actor, its prestige helping him avoid the kind of Hollywood typecasting that ruined contemporaries like Bela Lugosi.

The most obvious (though not most serious) problem with the film version is that while Adair, Hull, Alexander reprised their Broadway roles, the show's producers would not allow Karloff to leave the show for the 4-6 weeks needed for filming, figuring without their star ticket sales would plummet. Unfortunately, this stubbornness on the part of the show's producers completely thwarts what's probably the most famous in-joke in a Broadway play. In the original show, everyone remarks how, following Dr. Einstein's surgery, Johnathan Brewster looks like Boris Karloff, which infuriates Jonathan. In the movie, Raymond Massey is heavily made-up to resemble Karloff which transforms the running gag from a funny in-joke to a pointless and unfunny actor reference. With Karloff not allowed to reprise his tailor-made character for the film version, it would have made more sense to cast Peter Lorre as Jonathan, agitated whenever anyone says he resembles Peter Lorre. Or maybe contract Warner Bros. star Humphrey Bogart as a Jonathan that resembled gangster Duke Mantee.*

Worse, the usually florid actor Massey delivers an atypically nasally, monotone and humorless performance, the complete opposite of Karloff's melliferous menace on the stage, at least based on his preserved performance in a radio version, included as an extra here. Massey, and maybe Capra, felt that Jonathan should be more like Karloff's Frankenstein Monster than Karloff the horror personality. Massey's costume and stance certainly are intended to suggest the 1931 Frankenstein monster more than Karloff.

However, Karloff's absence is nothing compared to the film's biggest problem: Cary Grant. Grant was one of the great stars of Hollywood cinema, adept at both comedy and drama, but not all kinds of comedy and drama. Particularly under the direction of Howard Hawks, Grant excelled in comedies like Bringing Up Baby and His Girl Friday, and was even better playing light, "Cary Grant" roles in pictures like North by Northwest and Charade. But when it came to broad satire and slapstick, Grant was all thumbs. He's similarly frenetic in Hawks' Monkey Business (1952), a rare misfire for Hawks and Grant, a comedy that's merely silly instead of funny.

Grant is far worse in Arsenic and Old Lace, and for maybe the only time in his film career, Grant's usual illusion of effortlessness shows clear signs of strained desperation. In longer takes, expressing shock and surprise at the various revelations, his limitations manifest and Grant, shamelessly mugging, clearly is coming up empty. The role is simply way outside his range: unflappable Cary Grant trying to play highly flappable Mortimer. One day while waiting for the disc to show up, I began wondering whom I might have cast when I hit upon the ideal actor for that role, the antithesis of Grant: Eddie Bracken. Bracken's forte was playing nervous, highly excitable types best represented by his two films for writer-director Preston Sturges: Hail the Conquering Hero and, especially, The Miracle of Morgan's Creek, in which he was flat-out hilarious. Bracken would have been perfect, so much so that he must have played Mortimer Brewster onstage at some point in his long career.

But even if Warner Bros. had insisted on a Big Star for the lead, almost anyone would have preferable to Grant. Jimmy Stewart probably would have been just fine; Joel McCrea, Gary Cooper. Even during production Capra and other others noticed how bad Grant was playing scenes, and Grant himself later felt Arsenic and Old Lace featured what was probably his worst-ever film performance. Even Grant knew his limitations.

And there are still more problems. In adapting the play, Julius and Philip Epstein, who had better luck adapting Everyone Comes to Rick's soon after, strangle the almost New Yorker subtlety of the humor of the play in trying to "open it up," adjust some of the writing in a vain attempt to better suit it to Grant (and Capra) while also, probably unconsciously, blend it into Warner Bros.'s house style, i.e., for its broader, more working-class base. The movie begins with a jokey text prologue and main titles that show its hand too early and, inexplicably, opens with a contentious Brooklyn Dodgers-New York Yankees baseball game (on Halloween?). This is followed by a long, pointless scene of Mortimer (in the film but not the play famous for his writings arguing against marriage) and Elaine attempting to get a marriage license, played more like a Three Stooges short than anything in Kesserling's play. All this serves is to reduce the importance of the elderly aunts, central to the play but almost minor characters in the film.

Capra's film does have some good points, mainly in scattered supporting performances. Peter Lorre, Jack Carson, James Gleason (a bona fide Brooklynite), and Edward Everett Horton are especially good, ideally cast even, all quite funny in their roles and good fits with the Broadway actors. Had the rest of the picture been as delightful as those four actors, the movie of Arsenic and Old Lace might have been a classic comedy.

Presented in its original 1.37:1 theatrical aspect ratio, the black-and-white Arsenic and Old Lace sources the original 35mm nitrate camera negative and a 4K mastering. The mono audio used the 35mm optical soundtrack positive. The results are excellent, similar to other ‘40s Warner titles. English SDH are included and the disc is region "A" encoded.

The disc is rather light on supplements, though what's here is quite good. The main extra is a new audio commentary track by Charles Dennis, author of There's a Body in the Window Seat: The History of "Arsenic and Old Lace", which traces the development of the play, the film and other incarnations of the material. Also included is a 1952 one-hour radio adaptation featuring Karloff, a trailer, and a fold-out essay by critic David Cairns, who liked Grant and the film far more than I did.

As essential American theater, adapted by one of Hollywood's great directors with one of its greatest stars in the lead, Arsenic and Old Lace should be seen at least once, and thus Recommended. But, no, it isn't very good.

* When Bela Lugosi played Jonathan Brewster on tour, he resembled "Bela Lugosi." Much more sensible. Coincidentally, in Lugosi's 1943 horror film The Ape Man he played a character named Dr. James Brewster, likely a reference since Lugosi had already been touring by then.