The Counterfeit Traitor (1962), a World War II espionage film written and directed by George Seaton and starring William Holden is, at 140 minutes, overlong and rather stodgy in its direction, but the film has unusual, almost unique qualities for a film of this kind. Instead of a glorified, high-tension escapist adventure story like The Guns of Navarone (1961) it personalizes the terrible cost of war as a series of intimate tragedies only partly offset by likewise small but meaningful moments of compassion and empathy. Superficially it resembles dozens of other espionage films but, for those paying attention, the film surprises by digging much deeper than the usual studio picture. 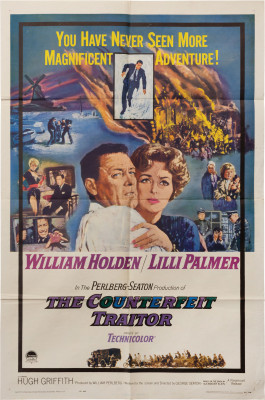 Based on the 1958 biography of the same name by Alexander Klein, The Counterfeit Traitor stars William Holden as real-life oil trader Eric Erickson, a Swedish-American who in the 1920s moved to Sweden and renounced his U.S. citizenship. During the Second World War Sweden itself remained neutral, with Erickson free to continue dealing oil to both the Allied and Axis powers (while getting rich in the process). However, his dealings with the Nazis gets him blacklisted in the U.S., a move spurred by British Intelligence in order to blackmail Erickson into working for them as a spy.

On orders from British (though emphatically Welsh) agent Collins (Hugh Griffith), to clear his name Erickson must masquerade as a Nazi sympathizer, eventually to propose a deal to build an oil refinery for increasingly oil-strapped Germany, a refinery that Sweden would never actually build, but which would lull the Nazis into the false belief that plenty of oil will soon become available.

To achieve this Erickson is forced to appear anti-Semitic in public, renouncing his closest friend, Max Gumpel (Ulf Palme), a Jew. In Sweden Erickson becomes a pariah, his wife leaves him, his family back in America disowns him, but it does make him a credible ally as far as Nazi Germany is concerned.

Most of the film traces Erickson's back-and-forth trips to Germany to gather information, his recruitment through blackmail (and thus betrayal) of high-level German friends, and his eventual romance with Marianne Mollendorf (Lili Palmer), a promiscuous socialite actually also spying on behalf of the Allies.

The plot summary above reads like a standard espionage thriller and, in a way, that's partly what it is. Yet what sets The Counterfeit Traitor apart from such films is its realistic attention to the personal damage war inflicts on human relationships and the ways it tests one's morality. Though apolitical at the start of the film, Erickson finds betraying friends left and right and making them believe he's a Nazi sympathizer agonizing ordeals with no guarantee he can rebuild those relationships at war's end. After humiliating Gumpel in public, the friend later slips him a note expressing faith that Erickson did so for some larger, noble purpose. That his friend would remain loyal under such terrible circumstances is a moving gesture, but provides little comfort to Erickson who will be relieved of this tremendous burden until after its conclusion. If he survives.

A key scene in the film has Erickson visiting a Nazi oil refinery, where Polish "volunteers" have gone on strike. The Nazis will have none of that, and randomly hang one of the workers from the back of a tow truck. Erickson witnesses this from a second-floor window, the threats and eventual hanging seen in long shot from a distance. Erickson can do nothing to help him or the other workers, all of whom are complete strangers. Yet this personal and literal distance from the murder somehow makes it all the more powerful. Later, in an even more excruciating moment, Erickson is essentially made to watch a political execution so matter-of-factly carried out it's clinical in a way not expressed until decades later, in movies like Schindler's List.

In another scene, Erickson visits a longtime colleague only too happy to blackmailed. He knows Germany will lose the war eventually and wants to protect himself and his family from postwar reprisals. Yet both his wife and especially his Hitler Youth son are avid Nazis, the latter obsessively so, watching Erickson's and his father' every move. The businessman might get British protection after the war, but political extremism has already destroyed his family long before any air raids can.

The war was less a distant memory in 1962 than 9/11 is to us now, yet The Counterfeit Traitor further impresses in the way it eschews war movie stereotypes. There's a moral blurring applied to almost every major character. The British agents are engaged in important, necessary work, but are also utterly ruthless in getting it done, casually (so it would seem) destroying personal lives and blackmailing people into suicide missions. (Holden, no stranger in films to these rock-and-a-hard-place, no-win choices, is well-cast.) Erickson is a shameless, morally irresponsible opportunist who becomes heroic only after witnessing German atrocities first-hand. The German characters vary widely, from True Believers to anti-fascist but under constant threat of being exposed and executed. This may be the first American or British film to allow an SS officer (played here by Wolfgang Preiss) any measure of empathy and, later, a tense moment during the climax is relieved not by some heroic act by Holden, but by a German sailor willing to chance a little humanity.

The clunkiness of Seaton's direction is offset somewhat by the use of locations in Sweden, Germany, and Denmark, many where the real activities occurred. However, little effort is made to maintain authentic period detail. Background extras wear 1960 fashions and hairstyles, and if you were to walk in on the film midway through, for a long time you'd reasonably assume you were watching a Cold War thriller rather than a World War II one. (Indeed, footage in Copenhagen includes a big sequence with hundreds of extras on bicycles that closely resembles the monster scenes in the Danish-made Reptilicus.) And while Swedish actors play Swedish characters, Germans play Germans, etc., all speak English, even to one another when no native English speakers are around. The Longest Day (1962) was the first mainstream Hollywood film to dispense with this awkward convention, but it was still decades away from being commonplace. Still, it is odd to see busy German character actors and Ingmar Bergman repertory members all kowtowing to Hollywood demands. Yet, in other ways, the mundane qualities of the film match the mundane -- yet more realistic and horrifying -- ways the horrors of war really play out.

The undercover American hero falling in love with his female contact behind enemy lines is a cliché, but the film's script and Holden's and Palmer's acting, make would easily could be schmaltz into something compelling and entirely believable. The work they're doing is unbearably stressful and unrelenting, and both players are superb at expressing this.

Mostly, though, The Counterfeit Traitor impresses with its small but very effective small touches throughout. When Holden's character is brought in to Gestapo headquarters for questioning, he passes myriad others facing imprisonment or execution waiting anxiously in hallways. Holden never interacts with them; the camera simply shows us what he also sees. In one brief shot, all we see is an older man taking off and handing his wristwatch to his distraught wife. Moments like that speak volumes.

Licensed from Paramount, Kino's Blu-ray appears to draw from the same 4K 1.85:1 widescreen transfer that Australian label Imprint has used. Opticals are soft and grainy simultaneously, but straight cuts are pretty solid. My hunch is the original theatrical release was mono, but Kino provides both DTS-HD Master Audio mixes in 2.0 mono and 5.1 surround, though the latter, to say the least, makes modest use of the additional channels. Optional English subtitles are provided. Region "A" encoded.

Supplements are limited to a pretty good commentary track by Julie Kirgo and a trailer.

Superficially, The Counterfeit Traitor resembles myriad other films of its type yet and while far from perfect, the film surprises us with its perceptive little moments. Highly Recommended.