This movie had me sold just on the basis of its setting being a 2,000 foot TV transmission tower. The Sacramento TV market is served by several towers of that height located in the town of Walnut Grove between Sacramento and Stockton. Even with the quality of content from TV stations these days being in the toilet, I still can't help but look up at the towers whenever I go by. Same goes for transmission towers in other areas, such as San Francisco's famous Sutro Tower. That said, the thought of going to the top of those things to work on them terrifies me, and I certainly wouldn't put myself through that to keep any of today's TV on the air. 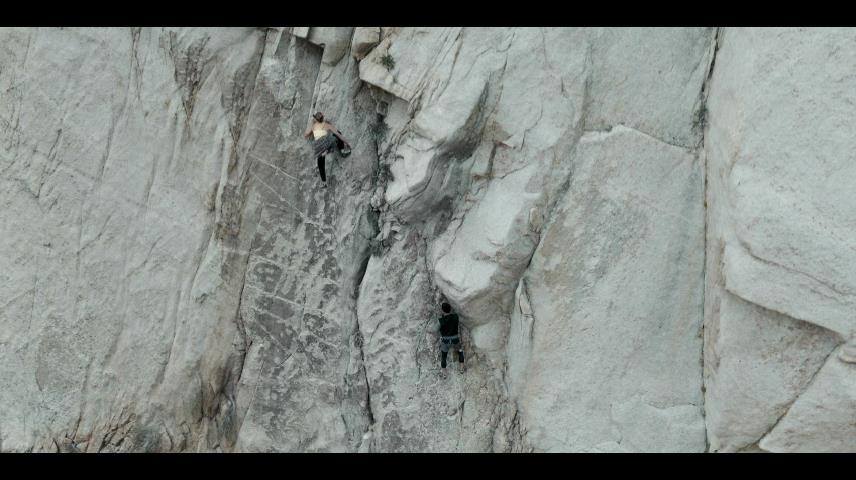 The main setting of the movie Fall is a fictitious tower, one that was set up in the middle of a desert seemingly in Arizona. First question this makes me ask is how many viewers did it reach, given it seems to be in the middle of nowhere? It's also rusted with age, falling apart, no longer actually functional and slated to be torn down soon. This alone expects a critical viewer to suspend disbelief, but I'm game. The movie introduces us to our two main characters through a prologue that reminded me a bit of the cliche-ridden and forgettable Vertical Limit from 2000. Best friends and thrillseekers Becky (Grace Caroline Currey) and Hunter (Virginia Gardner, who incidentally is from Sacramento) are climbing a mountain with Becky's husband Dan (Mason Gooding, son of Cuba Gooding Jr.) who accidentally falls and is killed after just a couple minutes. Cut to "51 Weeks Later" and Becky is a mess, getting drunk and not much else. She gets a call from Hunter who has been trying to get her out of her rut- she tells her about the abandoned tower and needs a "partner in crime" to climb it with her. Becky reluctantly agrees. 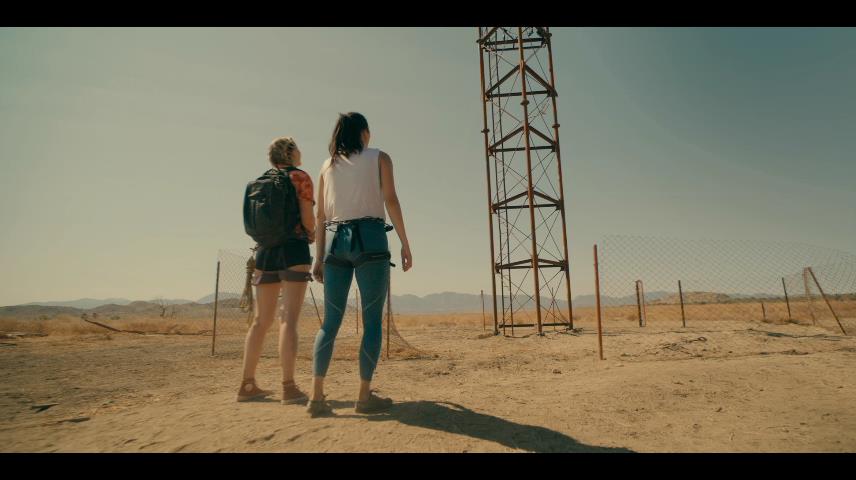 The setup to the big predicament that is the main focus of this movie is finished as the two climb to the platform at the very top of the tower and scatter Dan's ashes from it. After a bit of reflecting and such, they decide to climb back down only to have the ladder break and fall to the ground, leaving them stranded. I figured they'd be able to call for help via their cell phones, but they try that right away and it turns out the signals won't reach at the height they're at. They now have to spend the rest of the running time figuring out what to do next. If you're a jaded viewer, you either don't care what happens to them or look for things that could never happen in real life. While I'm often jaded, this movie had me grabbed enough by then that I was willing to just go with it and suspend disbelief. I found myself hanging on and just imagining what I would do if I were stuck in that situation while reminding myself never to do anything to get into any situation like that.

While this isn't a super big-budget production, the effects work well enough to be convincing and the two leads play it rather straight also. Looking for tell-tale signs of fakery as I usually do, I still got pulled in by the thought of being up that high. There's a few interesting shots and camera movements that make this an experience also, such as views from high above the tower and the camera flying by fast. The effect is likely diminished on a smaller screen, my 75-inch did the job nicely but this could really blow you away at an IMAX theater. A virtual-reality simulation would also be quite thrilling and torturous at the same time. 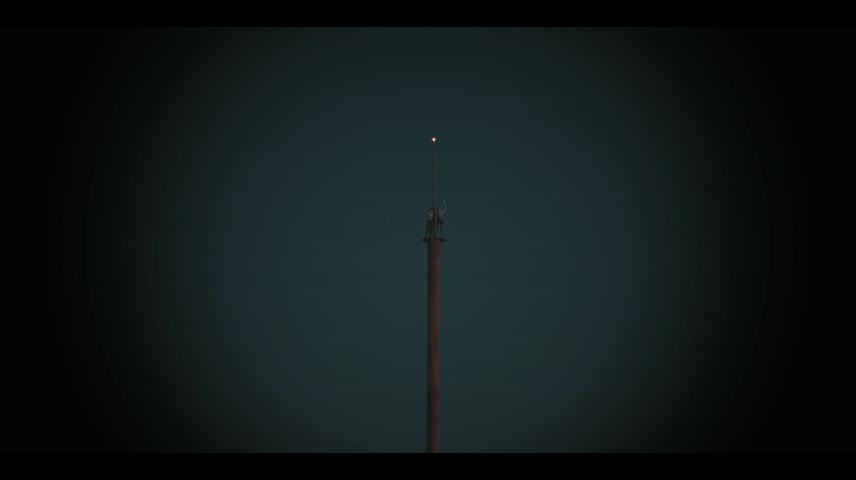 Fall is presented in an odd ratio that the cover indicates as 2:1, appearing slightly wider than the usual 1.85 ratio but not as wide as 2.35 scope. I can only guess how this looked in theaters, as many these days don't even bother to properly mask their screens for the two common ratios and are often the wrong ratio natively on top of that. At home this works well enough, although dealing with height it's a case where a narrower ratio would convey that more effectively. The picture quality of this Blu-Ray disc (4K would have been great, but has not been issued) is a mixed bag. Bright scenes such as the opening mountain climb look great, but darker scenes at night (as in the image above) suffer from a higher than normal amount of banding- this is where shades of a color appear in noticeable sections rather than blend seamlessly together. This was a common problem with streaming video for a long time but recently seems to have been just about solved- discs of course are supposed to be reference quality and never compromise bandwidth so it's baffling that this passed quality control. Had I any say, I would have sent it back to be redone.

The 5.1 audio mix uses the surrounds more effectively on the ground, such as a car approaching outside during an indoor scene. One would expect nonstop atmospheric effects once the top of the tower is reached, but oddly the surround use seems to be more restrained at that point. It's still an engrossing mix but not all that it could have been. A 2-channel descriptive audio track is included which is rather amusing, and you can select hearing-impaired subtitles or Spanish (where songs that are played or sung by the characters are translated.) 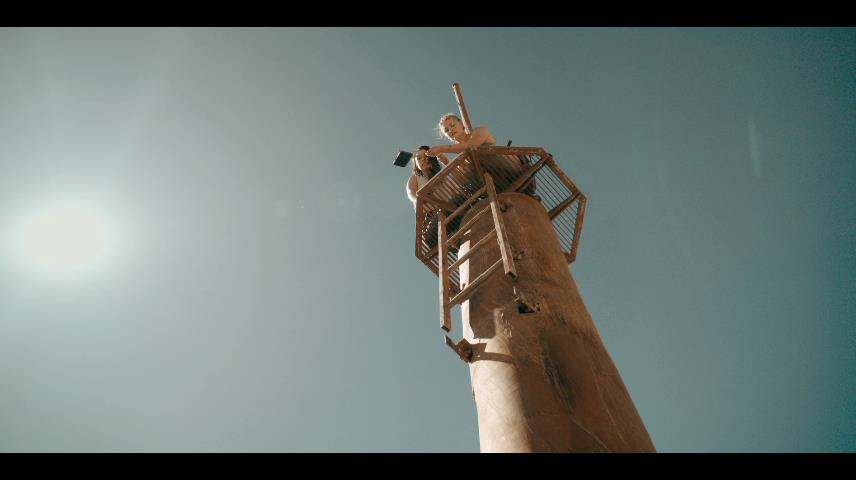 I was left rather shaken by the end of my first viewing and almost thought that any extras showing how the movie was made would reveal too much spoiling the illusion. Nevertheless we get a short making-of piece that pulls back the curtain a bit. The main trick was to build a smaller tower on top of a high mountain, and then keep that mountain out of view. Director Scott Mann and producer James Harris also provide a commentary track where they talk about the experience- they say this was one of the first movies to be shot after the COVID pandemic hit, requiring some safety measures but a reason many needed to get outside. They mention that there were many safety wires and harnesses used by the cast that were digitally painted out also. The other extras are a music video of the theme song "I Have Never Felt More Alive" set to clips from the movie, and a trailer. 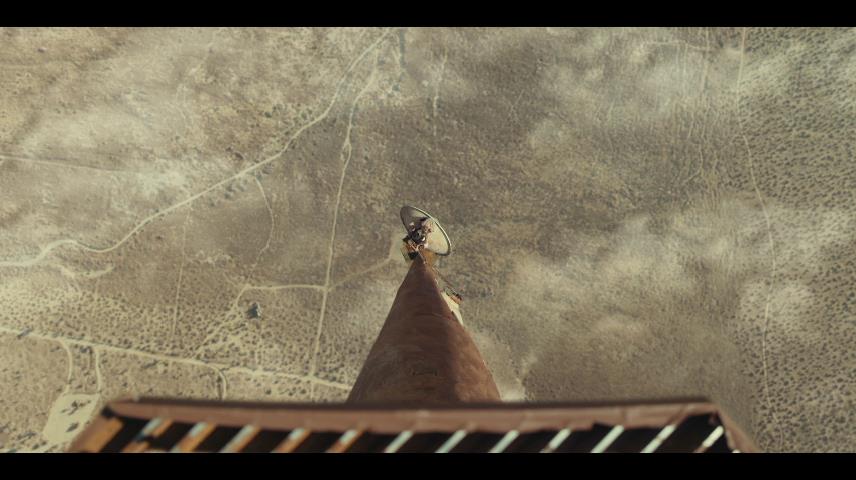 General reaction to this movie has been quite mixed, but I'm unashamedly in the camp that just went with this movie and was blown away by it. On a big screen it succeeds in putting the viewer in the situation which came from something that just seemed like a good idea at the time, and in suspense as to how everything will turn out. Even on subsequent viewings where you know how it will end, it's still been quite thrilling for me- though of course I might end up watching this too many times and no longer being fazed by it at all. It's definitely a movie I'd call an experience though, and demands to be seen on the biggest screen possible with a good sound system at proper volume. The only drawback is the banding on this disc, which simply shouldn't occur in this day and age especially when discs are bought by the more quality-conscious as the 'mainstream' migrates to digital. (A code for a digital copy is included, and I may check that out and update this review later with my thoughts on its quality.)