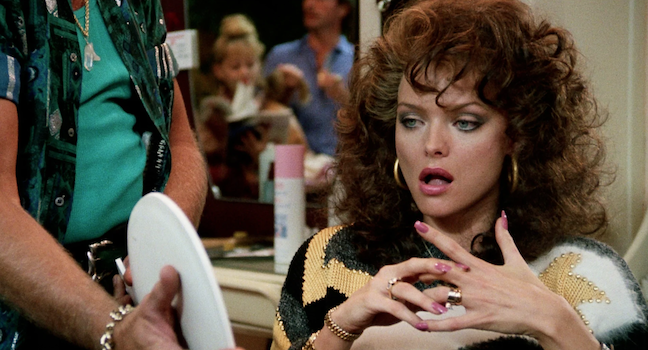 It's taken a long time for me to fully appreciate Jonathan Demme as the major filmmaker that he is. Movies like The Silence of the Lambs and Philadelphia were inescapable during my pre-teen and early teenager years. And I liked them, sure, but they were like fluoride in the water. Easy to take for granted.

Also, I initially watched Demme's signature run of '80s flicks when I was too young to appreciate their originality. Something Wild and Stop Making Sense were just... weird. (The Talking Heads film is now somewhere in my personal all-time Top Five.)

Married to the Mob, newly revived on Blu-ray by Fun City Editions, similarly turned into a slow burn for this viewer. A Mafia comedy more interested in offbeat, rounded characters than in broad stereotypes, Married to the Mob has an atypical rhythm and slightly surreal tone that suggests an '80s take on Preston Sturges (an influence that screenwriters Barry Strugatz and Mark R. Burns name-check in the disc's supplemental featurettes). The film arrived during an odd Hollywood mini-boom of movies about Italian-American families inside or outside the Mafia (Moonstruck, I Love You to Death, Cookie) but Demme's love of funky audiovisual textures, plus his signature empathy for all his characters, distinguish this film from the pack.

Michelle Pfeiffer stars as Angela de Marco, a dissatisfied Mafia wife slowly withdrawing from her mob-wife friends and her philandering husband, Cucumber Frank (Alec Baldwin). (Pfeiffer's nasal whine of "I want a divorce!" is burned into my brain from frequent viewings of the TV ads for this movie as a kid.) Frank dips his wick in the company ink, so to speak, sharing the same mistress as his boss, Tony "The Tiger" Russo (Dean Stockwell). Tony figures out what's up and kills both Frank and his mistress in a motel hot tub. (Baldwin went on to headline Demme's production Miami Blues, maybe as a consolation for his character's shortened screen time here.) Young G-man Mike Downey (Matthew Modine) and his partner Ed (Oliver Platt) smell the blood in the water -- semi-literally -- and get the OK to ramp up surveillance on Tony and his associates.

With Frank and his old mistress dead, Tony tries to move in on Angela. Gifts for Angela and her son start flooding in, much to Angela's chagrin and the growing ire of Tony's wife Connie (the fabulously intense Mercedes Ruehl). Angela decides to leave it all behind, giving the house and its contents to Goodwill before relocating to New York's Lower East Side. But, as the movie's title implies, Angela can try all she wants to move on but she won't escape the "family" she married into. Tony quickly finds her new rundown digs, and so does the suspicious Connie. The boyish Feds have followed too, hoping to get some dirt on Tony in his "lover"'s unusual new love nest.

That's a lot of spinning plates for what is essentially a romantic comedy, but Demme serves his characters and especially his ascendant leading superstar well. Michelle Pfeiffer's performance has the emotional smarts and effervescence of a classic screwball heroine. Her character meets cute with Modine's investigator as he tries to plant a bug in her apartment; he lies about living in the building and she quickly asks him out on a date. Pfeiffer and Modine's dynamic suggests a tamped-down version of the Jeff Daniels-Melanie Griffith romantic odd couple from Something Wild, with Modine as the new stiff, by-the-book guy who gets loosened up by the more adventurous Pfeiffer. Modine's energy is a little more off-kilter than the amiable Daniels, which Demme emphasizes by giving Modine weird bits of physical business, such as an acrobatic morning dressing routine and an abrupt leap from the inside of a city bus onto its roof.

The film is a little less clever than it could be in bringing all in its story strands together, but the viewer is left with an overall satisfying glow at the movie's end. This is really a showcase for the actors, and no one in the ensemble phones it in.

In an odd touch, the end credits are chock full of deleted scenes presented without sound. Singer Chris Isaak, who appears as a hitman in clown drag during the film, is glimpsed in what looks like a more sizable subplot. Joe Spinell, possibly the character actor most frequently featured on Fun City Editions Blu-rays (see also: Walking the Edge and Rancho Deluxe), appears only in these cut moments. One assumes the full-length versions of these trims are history, otherwise they would have popped up
on disc somewhere, but it is thoughtful of Demme to give his cast and crew something to show for their work on these scenes. 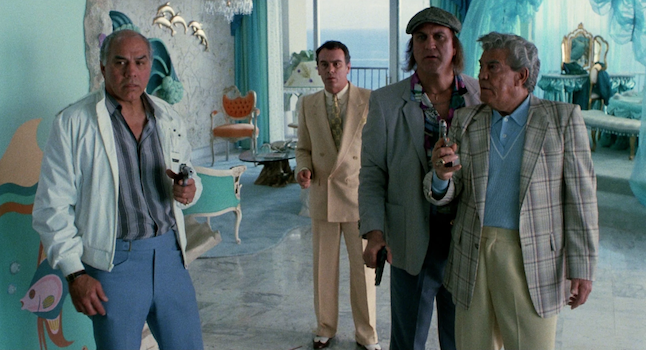 The Blu-ray
Married to the Mob comes with reversible cover art that highlights three different poster images for the movie. A booklet featuring color photos and essays by Jourdain Searles and Margaret Barton-Fumo are also included. The limited edition slipcover version of this release sold out in the blink of an eye; all that remains is the standard edition, which you can purchase from your favorite retailer, including the Vinegar Syndrome site.

The Video:
I did not check out Kino Lorber's 2014 disc for this title, so I can't make first-hand comparisons on this AVC-encoded 1080p 1.85:1 presentation. It's based on a new 2K transfer from the film interpositive, and it looks clean. Strong detail and vivid colors, although some online sources have noted that it looks like the film grain is a little more processed and less organic-looking than the older transfer. In motion, though, it looks quite organic and doesn't look distractingly scrubbed to these eyes.

The Audio:
The LPCM 2.0 stereo audio mix nicely serves the dialogue and music, which, in typical Demme fashion, consists of a boatload of eclectic needle drops along with some nice score cues by David Byrne. Effects, such as gunfire, are bold and crisp. An English SDH track is provided.

- The hosts of the I Saw What You Did podcast chat and enjoy the film. It's low on research and heavy on hangout vibes. Unfortunately, the film's soundtrack is not mixed into the track, so there are long, completely silent stretches, as well as references to dialogue that we can't hear.

Final Thoughts:
Jonathan Demme's screwball mob romance is the kind of offbeat and warmly conceived comedy that only he could create. Michelle Pfeiffer has rarely been a more appealing star presence than she is here, but the film makes room for memorable turns by Matthew Modine, Mercedes Ruehl, Dean Stockwell, and at least a half-dozen others. Fun City Editions' new disc features some great new interviews (the Ruehl piece is a particular must-watch) and potentially marks Joe Spinell's ascendance to the crown as the most-featured character actor in the FCE canon (someone fact-check me here). Highly Recommended. 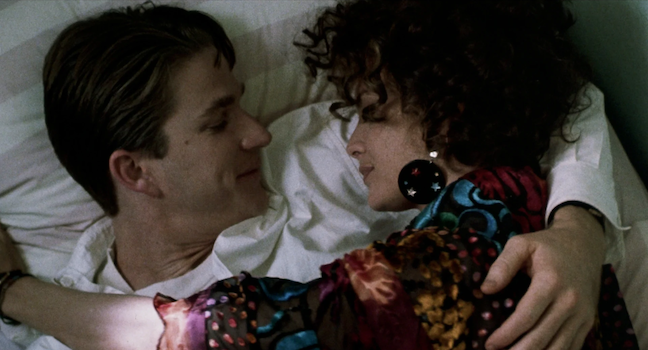