Outer Limits: Season One (reissue), The

Season One of The Outer Limits was first released to Blu-ray by Kino in March 2018 with an SRP of $99.95. The set was reissued in September, though not significantly reduced in price, to $89.95. Usually when TV shows are reissued on DVD or Blu-ray their price drops dramatically and the packaging often changes, so it's not clear what Kino's reasoning is here. Regardless, it has been reissued and thus worth reviewing.

For the unacquainted, The Outer Limits was a one-hour (primarily) science fiction anthology series that ran on ABC for a season-and-a-half, from September 1963 to January 1965. At the time ABC was by far the least-watched of the major TV networks; its shows rarely won their time slots and only two ABC programs, The Patty Duke Show (at #18) and The Donna Reed Show (at #16) made the Top 20, ratings-wise. Rod Serling's The Twilight Zone had been a prestigious, popular hit, though by this point was fading fast: 1963-64 would be its fifth, final, and mostly ignominious season. 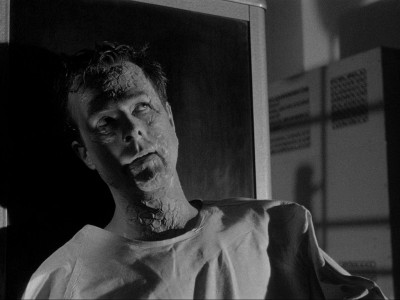 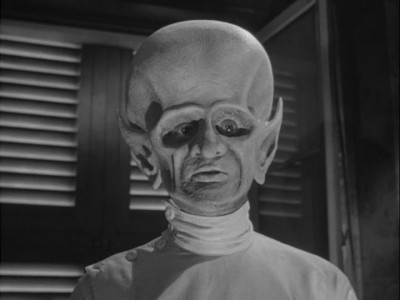 The Outer Limits was primarily the creation of playwright-turned-TV/screenwriter Leslie Stevens and Joseph Stefano, he best-known for writing the screenplay to Alfred Hitchcock's Psycho (1960). Both aspired to the same high-level of writing as the best Twilight Zone episodes while giving The Outer Limits its own distinctive style. Where Twilight Zone exuded a kind of classicism, old studio polish, partly due to that series having the run of MGM's backlot and other facilities, The Outer Limits was more experimental. Zone rarely produced original visual effects and did few elaborate make-up effects, for example, but these were part of Outer Limits fabric. More importantly, though, was the expressionist cinematography of three-time Academy Award-winner Conrad Hall, and the disorienting, sometimes atonal musical scoring of Dominic Frontiere. Like Zone, however, The Outer Limits attracted the top actors doing anthology shows at the time; many appeared on both series, and much Outer Limits talent both in front of and behind the camera ended up in Star Trek after the show's cancellation.

Because just 49 episodes were made, The Outer Limits didn't become the syndication staple that Twilight Zone did; there just weren't enough episodes. I didn't get to see it at all until some episodes began airing on HBO in the late 1970s. Some were later released on VHS, but MGM's eagerly awaited 2007 DVD release was a big disappointment, with terrible bit-rates (eight 50-minute episodes crammed onto one disc). Kino's Blu-ray is by far the best way to watch them short of 35mm screenings. (And rarely, those happen. Friend and TV historian Stephen Bowie and I attended one such event where two classic episodes, "Demon with a Glass Hand" and, I think, the original cut of "The Forms of Things Unknown" were shown. Stefano, actor Martin Landau, writers Harlan Ellison and Lou Morheim, and others attended.)

Unlike Serling, who rose up through the ranks of live television, Leslie Stevens came from the stage, his Broadway play The Lovers, later adapted into the excellent The War Lord (1965) with Charlton Heston, being his best remembered. His screenwriting credits including the self-consciously arty The Left-Handed Gun, Arthur Penn's 1958 film starring Paul Newman as Billy the Kid, and later he directed the bizarre Incubus (1966) starring William Shatner, notable as the only feature film (to date) made in Esperanto.

Earlier this year I began watching Stoney Burke, Stevens's first TV series, a contemporary Western drama starring a pre-Hawaii Five-O Jack Lord as the titular character, a bronc rider vying for an elusive Gold Buckle, the top prize among rodeo cowboys. I didn't think a show with that premise would hold much of interest for me, despite an impressive regular cast that included Warren Oates and Bruce Dern (both of whom would appear on Outer Limits) but, boy howdy, was I wrong. It's easily one of the Ten Best TV dramas of the 1960s and holds up superbly well today. Most familiar with Lord via his later signature role, I was flabbergasted by both the gentle complexities of the character Stevens created, and by how Lord fleshes it out into someone rather like a young Ben Johnson.

Many of the qualities found in The Outer Limits began with Stoney Burke. Conrad Hall shot some of its episodes, Dominic Frontiere did the music and was an associate producer, art director Jack Poplin worked on the later show, etc. By a country mile it's the best thing Stevens ever did for television. Sadly, like Serling, Stevens seemed to burn out early, or maybe he just had a long run of bad luck. By the late ‘70s he was affiliated with dreck like Buck Rogers in the 25th Century and Sheena. He died in 1998.

Fundamental to Stoney Burke was that character's ability to acutely observe and accurately assess human behavior. Like Ben Johnson's real and reel cowboy, Stoney was unfailingly polite with an almost childlike absence of cynicism. Stevens obviously found such characters appealing, as variations of them are often at the center of The Outer Limits as well, though usually less successfully. Indeed, Cliff Robertson in the pilot film, "The Galaxy Being," is one such character, a dreamer using the radio station he owns to try and contact alien worlds, a man for whom social obligations, making a living, or even basic communication with his wife (Jacqueline Scott) just aren't on that same radar.

The Outer Limits showed a lot of early promise, with varied, challenging episodes like "The Architects of Fear," "The Sixth Finger," and "The Man Who Was Never Born," episodes alternately quite disturbing for early ‘60s television or unexpectedly tender like Stoney Burke frequently was. Stevens and perhaps Stefano seem to have been the kind of TV/film writers putting interesting spins on familiar sci-fi concepts possibly assuming these familiar tropes had never been done before, prior to The Outer Limits. "The Hundred Days of the Dragon," for instance plays like a shameless though, on its own terms, quite entertaining, rip-off of The Manchurian Candidate, famously adapted by director John Frankenheimer the year before. Yet, watching it again, it also seems possible at least some of the key people involved hadn't seen Frankenheimer's film, and that the similarities are merely coincidental.

In any case, where Twilight Zone was content with allegorical tales with signature twist endings, shows that sometimes consisted of a single character and very often just two or three, Outer Limits had bigger ambitions. Where Zone's were generally built around a single concept, tautly peeled like an onion over the course of 30 minutes, Outer Limits presented big ideas with far-reaching consequences. When Zone switched from 30 to 60 minutes in its abbreviated fourth season, the show unraveled because what worked so beautifully in 30 minutes seemed shamelessly padded and meandering at 60. At its best, Outer Limits took full advantage of the hour format, though it, too, gradually fell into decline.

Like Twilight Zone, The Outer Limits was a science fiction show for adults, like Gunsmoke was to Westerns. Nevertheless, kids tuned in and ABC, wanting to nurture their own, somewhat clueless expectations for such a program, insisted on what came to be known as "bears," the-Monster-of-the-week, the hook to pull in viewers. But a series like Twilight Zone could be produced for $100,000 per one-hour episode because it avoided special visual effects, fancy makeups, and expensive original sets. The Outer Limits tried to make do with (probably) even less money, and a cheapness, sometimes even threadbare quality set in on many later episodes (especially during season two), something even Conrad Hall's gelled camera lenses couldn't hide.

Other notable episodes in season one include "The Zanti Misfits" (which dared expensive and time-consuming stop-motion animation), the daffy but likeable "ZZZZZ," the impressively hair-raising "The Invisibles," "Fun and Games," and "A Feasibility Study." Though comparisons to Twilight Zone are inevitable, after a while the show got into a narrative rut similar to the earlier, far more rudimentary Science Fiction Theater (1955-57). Both Outer Limits and Science Fiction Theater began with a wide range of stories but then, probably in both cases partly for budget regions, too often became shows about scientists working in laboratories stumbling upon some fantastic discovery or invention. Science Fiction Theater was cheap and overly conservative in its scripts (host Truman Bradley constantly reminds us what we're watching "is fiction -- it did not happen") while Outer Limits sometimes goes to the opposite extreme, trying to express Big Concepts its low budget and tight shooting schedule couldn't really make credible.

Yet, the best Outer Limits are science fiction television drama at its finest, and Season One has an abundance of outstanding episodes.

The 32 episodes of Season One are presented 1.37:1 standard format, their crisp, 35mm black-and-white photography coming off well in high-definition. The DTS-HD Master Audio (mono) is also excellent and optional English subtitles are provided on these Region "A" encoded discs.

What's difference about this reissue is the absence of a 40-page booklet included on the original Blu-ray release. Otherwise, all 28 audio commentaries are included, with some episode having two, some none. That work is divided among David J. Schow, Tim Lucas, Craig Beam, Reba Wissner, Gary Gerani, Michael Hyatt, and Steve Mitchell.

The best Outer Limits hold up well, while the lesser episodes are still entertaining, sometimes goofily so, sometimes for intriguing concepts its makers just can't quite pull off. But there are many hours of entertainment here, and a DVD Talk Collectors Series title.