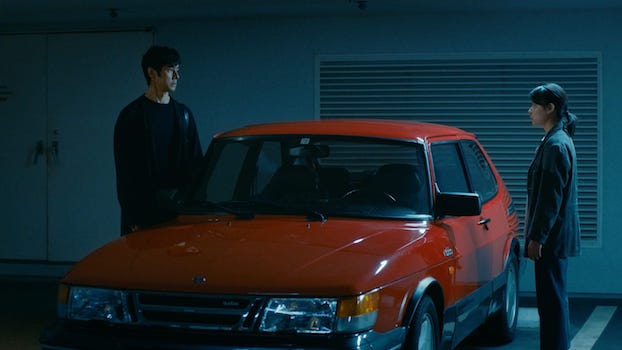 Drive My Car was 2021's little art film that could. It has the pedigree of a Haruki Murakami short story as source material, which is certainly nothing to sniff at, but it's no guarantee of international success either (anyone remember 2010's Norwegian Wood?). Plus, a three-hour runtime is an automatic dealbreaker for many viewers (which, pardon the cliché, is ludicrous in the binge era of media consumption). Yet, Ryusuke Hamaguchi's beautiful film managed to net a decent box office and score four Oscar nominations, winning Best International Feature. I have watched Drive My Car a few times in theaters prior to popping in Criterion's Blu-ray release, and I'm now convinced that it's destined to be an all-timer, cherished for years to come.

Director Hamaguchi's sensitivity as a scripter of characters and as a director of actors is key to what makes this a brilliant and affecting film. This sensitivity is woven into the thematic fabric of Drive My Car, set in the world of storytellers, actors, and directors. To paraphrase Hamaguchi's interview from the Criterion supplements, he sees acting not as putting on the mask of a character but as using the character to reveal yourself. His film's main character, Mr. Kafuku (Hidetoshi Nishijima), is a theatrical actor-director who mounts a multilingual production of Uncle Vanya but avoids casting himself in the lead role because of the power in Chekhov's text to rip the truth right out of an actor. His stubborn refusal is baffling to those around him, who know he can recite Vanya's dialogue from memory. But Kafuku has some emotional terrain to travel before he can play that part.

The film opens (now semi-famously) with forty minutes of backstory only hinted at in Murakami's original story. Kafuku has a loving, if slightly strained relationship with his wife, Oto (Reika Kirishima). She's a writer for TV dramas who figures out the plots to her stories in a sleepy haze, relying on her husband to recite the plot points back to her the next morning. They seem happy enough, but the loss of a young child roughly fifteen years before has cast a subtle pall over their interactions that they refuse to acknowledge. When Oto abruptly tells Kafuku that she wants to speak with him after work, he worries about losing Oto and delays his return home. When he finally stops dragging his heels and walks in to the apartment, he discovers Oto crumpled on the floor. She has died from a brain hemmorhage.

There's a little bit of a perverse thrill in seeing the opening credits arrive after what could be a complete short film on its own, but this long opening passage allows Hamaguchi to establish the film's emotional stakes in a far more elegant and potent way than if he had tried to integrate traditional flashback sequences. Characters will continue to talk to each other about their pasts, but Hamaguchi never takes us out of the present. These moments of storytelling are about their meaning to the characters in the here and now.

Considering Kafuku's fear of talking with complete honesty to his wife before she died, the character seems perversely focused in his work on the idea of overcoming verbal roadblocks on the path toward connection and communication. He is hired by a theater festival to mount his version of Uncle Vanya, which is designed to feature actors who do not speak the same native languages. The spine of the film concerns Kafuku's rehearsal process, structured in a way that is maddeningly opaque to the actors at first. The performers must not only wrestle with the text but adjust to melody of their collaborators' voices to pick up their cues and understand the emotions.

One of the most striking performances, both in the film and the play within, comes from Park Yu-Rim as Yoon-A, a mute former dancer who communicates using Korean Sign Language. Without the ability to speak, Yoon-A would initially seem to be the character at the greatest disadvantage in a theatrical production. But Park's performance feels totally open, unselfconscious and unmannered. Park is physically slight and comes across as delicate, but this seems a slight misdirect from the character's quiet determination.

An absolutely beautiful brief moment occurs when Yoon-A explains to Kafuku over dinner that she decided to attempt acting after she lost a baby to miscarriage. Her husband (Jin Dae-yeon), acting as interpreter, reads Yoon-A's sign and pauses. He quietly registers that his wife is willing to reveal this incredible source of pain and then relays the message. It's a subtle moment of strength for Yoon-A, as she confronts an apparent personal demon, and also an unexpectedly eloquent window into the relationship she has with her loving and proud husband. 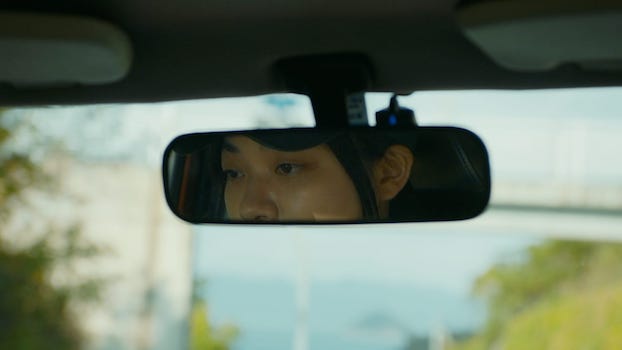 The title of the film, apart from being an obvious Beatles reference, stems from Kafuku's relationship with Misaki Watari (Tôko Miura), a young woman who has been hired by the theater festival to drive Kafuku around in his old Saab for insurance reasons. The stoic Kafuku is fairly fussy about his car and fights the requirement -- Murakami's short story makes him explicitly sexist against women drivers but the film stops just short. After a test drive, Kafuku grudgingly has to admit that Misaki is a great driver and slowly comes to depend on her. He plays a tape in the car of Oto reading the dialogue from Uncle Vanya, leaving gaps for Kafuku to recite Vanya's lines. Practically, it serves as rehearsal for Kafuku, but it becomes a kind of eulogy for his dead wife and a ritual in which Misaki the driver becomes a quiet participant.

If the play rehearsal provides the film's plot spine, the steadily growing friendship between Kafuku and Misaki is its emotional spine. In some ways, Misaki is Kafuku's stubborn, stoic clone. As they slowly open up to each other, it becomes apparent that they share rhyming traumas. In other hands, the fact that Misaki is the same age as the child that Kafuku and Oto lost would seem obvious and contrived, but Hamaguchi sidesteps easy emotional shorthand. The actors are so perfectly pitched that any small shift in Nishijima or Miura's deadpan expressions feels like an emotional explosion. In fact, the inevitable late-film scene where Kafuku and Miura let down their guards and really talk to each other about the painful memories they've been keeping hid is the one passage that works the least for me. It feels like the scene the movie needs more than the one the characters do.

This section is an unusual tonal misstep, because Hamaguchi and the actors consistently pull off bravura performance moments that feel much less contrived. One of the actors in Kafuku's Uncle Vanya is a disgraced TV idol named Takatsuki (Masaki Okada) that Kafuku suspects slept with his wife. Each man is jealous of the other, and Kafuku seems to be using his power as the director to subtly punish Takatsuki. At one pivotal point, Takatsuki shares a ride in the back of Kafuku's car and tells him a long story about a plot that Oto once told to him. Hamaguchi shoots the actor Okada so that he is almost looking directly into the film camera as his character reveals his secret knowledge about Kafuku's wife and simultaneously tries to make it clear that he was no real competition for her love. The camera angle is unnerving but oddly disarming. There's nowhere for Takatsuki (or Okada playing him) to hide, so, as uncomfortable as his eye contact might make we viewers feel, we can't help but accept him as being honest. This long scene is simply shot, but the effect is intense and electric.

As a film about artistic creation, Drive My Car belongs in a class with Jacques Rivette's masterful La Belle Noiseuse. Both films refuse to elide over the effort that goes into the creation of sublime artwork but somehow preserve the feeling that a magic trick is being accomplished in front of our eyes. This film specifically explores acting as a tool toward achieving honesty, without ignoring how the product is both transcendent and terrifying. Hamaguchi's film is so deft and elegant in the way it communicates all this emotional tumult while rarely disturbing the placid surface of its carefully studied style. Drive My Car is richly layered and sensitively wrought without an ounce of preciousness. It's a wonder to behold. 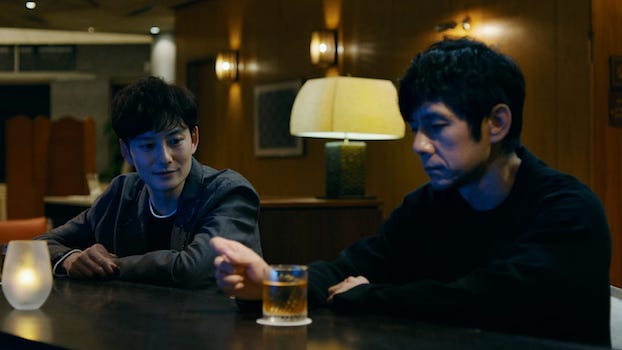 The Blu-ray
Drive My Car is packaged with a fold-out featuring an essay by novelist Bryan Washington.

The Video:
The film was finished digitally in 2K, which is why Criterion did not offer a 4K UHD option. Considering that, it's no surprise that this AVC-encoded 1080p 1.85:1 presentation looks extremely faithful to the theatrical experience. A few negligible moments of banding notwithstanding, there are no distracting flaws in this presentation.

The Audio:
The (mostly) Japanese DTS-HD MA 5.1 surround mix is crystal clear with subtle but palpable atmosphere. The jazz score by Eiko Ishibashi is well-supported without ever getting overbearing. The disc offers two subtitles options: an English track which translates all of the non-English languages that the characters speak (Criterion's packaging notes nine languages, including Korean Sign Language) and an English SDH track which provides captioning for everything.

(HD, 25:05) - A Criterion in-house interview with the director. An expectedly thoughtful discussion, touching on the influence of mentor Kiyoshi Kurosawa, the appeal of the Murakami story, and Hamaguchi's view of acting.

Final Thoughts:
2021's best film (sorry, CODA) is just as powerful on Blu-ray as it was in theaters. Hamaguchi's film is destined to be an all-timer. Criterion's supplements are solid, if a bit basic. Altogether, their release comes Highly Recommended. 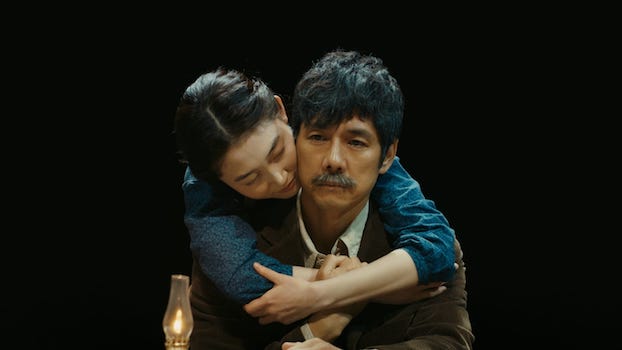