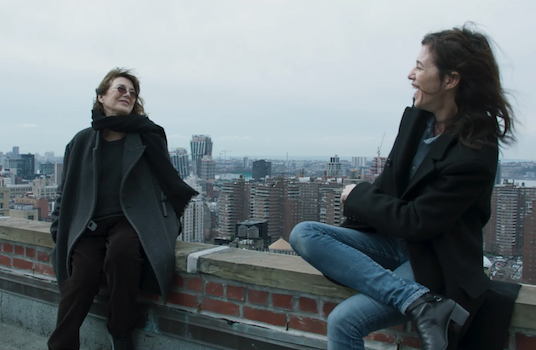 The COVID-19 pandemic lockdown inspired a metric ton of artists to turn inward and become reflective in making their new art. Musicians were first, churning out relevant singles and albums at a head-swimming clip; some of the most topical tunes already feel quaintly dated in this less restrictive global moment. But making movies takes longer, so it seems like we're finally seeing a crop of lockdown-influenced self-reflexive auteur works, like Steven Spielberg's wonderful The Fabelmans, A.G. Iñarritu's Bardo, and James Gray's Armageddon Time.

The new-to-Blu-ray doc Jane by Charlotte is less high profile than those flicks but it feels forged in the same soul-searching spirit. Actor-singer-director Charlotte Gainsbourg (Lux Aeterna) makes an intimate documentary about her mother, actor-singer Jane Birkin (Je t'aime moi non plus), and the film's tight focus and modest scale are partly dictated by COVID-era production restrictions.

Gainsbourg signals that this will not be a standard life-of or career-of doc with that title, which calls to mind Agnès Varda's 1988 film Jane B. by Agnès V.. Varda used Birkin's willingness to be coached as a model and actor as an opportunity to explore the relationship between artist and subject while crafting her portrait. Gainsbourg indulges in a little of this, orchestrating a modeling session for the daughter-director to shoot photos of her mother-model while asking her questions. (Birkin is still pleased to pose, though she has a complex reaction to the effects of aging on her looks.) But Jane by Charlotte is less about modeling than three other "M"s: motherhood, memory, and mortality.

Jane follows her mother to a few concert performances, but the heart of the film is a series of one-on-one discussions between Jane and Charlotte that are simultaneously open and tentative. Charlotte brings up their tendency to be shy, and Jane goes so far as to say that she has been intimidated by Charlotte when she was younger. Jane subtly expresses her pangs of guilt about how she has raised her daughters, but Charlotte, now a mother of three herself, seems to understand Jane entirely.

The film is probably most contented when Charlotte brings her young daughter Jo to visit Jane in her country home in Brittany. The interplay of the multi-generations of mothers and daughters is easy and unstrained. Charlotte's camera floats over the collected memories and other ephemera in the house -- Jane and Charlotte have a funny chat about Jane being a sentimental hoarder, essentially -- and the director-daughter gets to capture her famous mother just being a sweet grandma.

The film is quietly haunted by the ghosts of the family that Jane and Charlotte have lost. Most present is Jane's first child, Kate, who died in 2013 of a multi-story fall, possibly a suicide. Jane talks about Kate's death frequently and how her own well-being dramatically changed in the aftermath; the pain and regret is still palpable. The artistic elephant in the room, Jane's second husband and Charlotte's father Serge Gainsbourg, is glimpsed only in brief home movie footage. Charlotte inherited his apartment after his death in 1991 and left it mostly untouched. In a slightly spooky but touching sequence, Charlotte takes her mother to see the space for the first time in thirty years. The apartment is being turned into a museum and there's a slight sense of these two women becoming tourists of their own past, as they look at the cramped, black-painted space filled with gold records, recording equipment, and abandoned cigarettes.

While the specificity of this mother-daughter relationship is fascinating, the power of Jane by Charlotte resides in the countless universal details that emerge. I was particularly taken with a conversation about mother and daughter's shared insomnia, conducted while they lie side by side in a bed. Viewers looking for a more meat-and-potatoes bio-doc might be disappointed by Jane by Charlotte's conversational and elliptical approach, but the casual honesty of Gainsbourg's portrait illuminates more than a traditional film could hope to reveal.

The Blu-ray
Jane by Charlotte is packaged with reversible cover art and a booklet featuring an essay by Heather Drain. A limited edition slipcover featuring some of Charlotte Gainsbourg's photos of her mother is available at the Vinegar Syndrome website.

The Video:
This AVC-encoded 1080p 2.10:1 presentation is a solid reproduction of a mostly native-digital documentary. Certain moments were shot on a Bolex 16mm film camera (glimpsed below) but these are really just fleeting shots that briefly provide a different visual texture.

The Audio:
A strong mix for this (mostly) French DTS-HD MA 5.1 surround audio track. Unsurprisingly dialogue-forward, but with palpable atmosphere. The handful of needle drops are boldly presented and well-balanced. As with Utopia's Lux Aetrna disc, the English subs are burned-in for the French dialogue, but optional English captions are available for the other dialogue and effects.

(HD, 21:52) - Critic Dennis Lim talks Charlotte Gainsbourg about the film. She has a lot of good insight and makes this a much more entertaining and informative chat than a lot of Zoom-based bonus features that crop up on discs these days.