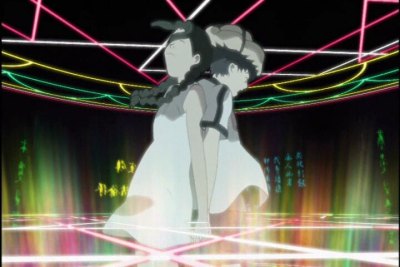 More strangeness from the Abenobashi Magical Shopping Arcade.  Sashi and Arumi have been thrown into an alternate dimension.  They are still in their home of Abenobashi, and the people are the same, but setting is different.  It may be a world based on magic or set in the middle ages.  In each world these two kids have to defeat a goblin and use it's magic to get back.  But these goblins are wimpy enough to be beaten by school kids, so their magic isn't very strong.  They are invariably sent to another strange version of their home town. They have already been in a fantasy role playing version of Abenobashi, and a future Abenobashi, where will they end up this time?

This second DVD has the next three shows in the series:

Episode 5:  Extinction.  Arumi and Sashi find themselves in a prehistoric Abenobashi filled with dinosaurs.  Arumi finds a lost baby triceratops and want to return it to it's mother.  Sahsi's sister, ruler of the local tribe of cavemen, say that it should be killed because it is a bad omen.  Mune-mune arrives just in time as a prehistoric jungle princess.  But where is the goblin?

Episode 6:  In the Night Fog.   Arumi and Sashi are a little different this time.  They are adults!  They are in an hard boiled detective story, and when they get split up, one ends up working for the police, and the other is with the mob.  The mysterious Minami aka "that man" shows up again, and explains some of the strangeness.

Episode 7:  Flashback.  This was a very good episode.  Arumi and Sashi are not in the show.  It tells the origin of the Abenobashi shopping arcade starting after WWII.  Sashi's grandfather has big plans to open a restaurant and be a successful businessman, but also lusts after Mune.  Unfortunately, Mune falls for "that man" who is planning the arcade and sets up the streets with mystical significance.

The first two shows are more of the same type of program that we've come to expect from the first DVD.  I didn't find them particularly funny or silly, just kind of dumb.  There was a lot of fan service with Mune-Mune wearing shirts that fall just below her nipples and very short skirts.  I've never been a big fan of this type of stuff, so it didn't add anything to my viewing experience.

The shows on this DVD were an improvement on the ones appearing on the first volume.  There was a little more continuity between episodes (not a lot, but some) and some questions were answered.  The last episode on the disc was very good though.  They dropped just about all the humor and told a straight forward story.  It was dramatic and piqued my interest.  If the other shows were like this one, I'm sure I'd enjoy the series a lot more.

With only three episodes on this DVD, I can't say that this is a great deal.  I think that publishers should put at least four shows on a $29.985 retail price DVD.  Three is just too few.

You have the option of watching this DVD with a 2.0 Japanese language track, or an English dub in 5.1.  I listened to both tracks on different episodes, and I definitely prefer the Japanese track.  Apparently, according to the AD Vidnotes, the characters all have regional accents.  When making the English dub, the actors used southern drawls and other accents to mimic this.  It is really annoying.  The accents don't sound authentic, and listening to them gets old really fast.  With this volume I've really grown to dislike the actor who voices Sashi in English.  This female actor tries, but she sounds like a woman trying to sound like a young boy, not like a lad.

The Japanese language track is very nice.  There is some use made of the soundstage.  Though there are not a lot of these stereo effects what they do use is effective.  There are optional English subtitles.

The video on this disc has an aspect ratio of 1.78:1 and is anamorphically enhanced.  The color tones used varies from episode to episode, but overall they are clear and bright.  There are some instances of aliasing, which show up in most animation, but these are minor and are only noticeable if you are looking for them.  There are a few instances of banding too.  But again, these are minor.  A nice looking disc.

As they did on the first disc, ADV did something neat with the FBI warning that pops up before the main menu appears.  They have a voice over that warns the viewer of dire consequences if the disc is illegally broadcast or copied.  There are a couple of different voiceovers with different scripts that pop up at random, so you never know what you'll get when you pop in the disc.  It's pretty funny.

There is an outtake reel that is nearly 4 minutes long.  I consists of the English cast messing up and ad-libbing some lines.  Most of these are funny.

This DVD also has AD Vidnotes; pop-up notes that explain jokes and cultural references that American viewers might not understand.  The Vidnotes on this disc are a great improvement over the first one.  They are much less frequent and don't explain obvious points like they did on the first disc.  There were still a couple of jokes thrown, which were still not funny, but this was kept to a minimum.

There are six trailers, and a textless opening and closing.

I still am having trouble getting into this series.  It really seems like a poor-man's version of Excel Saga to me.  The jokes are fairly predictable, and not that funny.  This volume did improve upon the last though.  There was more continuity and many questions were answered, but for every answer, another question arose.  The last episode was very well done, and actually made me interested in what happened next.  It bodes well for future volumes.  But with only three shows on this DVD I still can't recommend it for a purchase.  Rent it first.