Koch Lorber put their best foot forward earlier this year with their fine disc of Umbrellas of Cherbourg; now they've released an equally good DVD version of Fellini's La dolce vita. It's been on the most-wanted lists of Italian art pictures for some time, and hadn't yet seen a good transfer on any home video medium.

Fellini's breakthrough film marked the rise of the Italian film industry to its greatest height. In the early 60s Rome and Cinecittá were the cinema center of Europe. La dolce vita shows the director leaping from fairly intimate stories to a much larger canvas that covers the 'happening place' of a Rome elite that orbit around celebrities, the media, nightlife and sensation. Marcello Mastroianni is at the center of it all, and Fellini's sprawling, episodic storyline stays focused on his experiences. The mature direction allows Marcello's glamorous corruption to represent the lack of values in the glossy, shallow new world.

Synopsis:
Newspaper reporter Marcello Rubini (Marcello Mastroianni) has one girlfriend with marital ambitions (Yvonne Furneaux) and another one obsessed with her aristocratic friends (Anouk Aimée). He zips around Rome covering trashy photo layout stories with various groups of intellectuals and hedonists, attending parties that never seem to break up until dawn. He claims that he's looking for something with more meaning, but there's always another movie star to cover, like the alluring Silvia (Anita Ekberg), and always another party.

La dolce vita is a movie of uncommon balance for Fellini. Otto e mezzo may be his most personal but this is the one that shows him at his most powerful. It's big but never disorganized, and even though it frequently goes in for signature setpieces (bravura camera moves, grandly expressive scenes like the Trevi fountain), the film avoids the director's later ostentation. The technique is still geared to the story, and characters don't have to carry the additional burden of being symbols.

Not that the movie doesn't have its symbolism. Absorbed by the fast life, Marcello is too busy to experience the crisis of faith that the film suggests he wants and needs. He witnesses fraudulent distortions of Catholicism, from superstar Sylvia's PR invasion of the Vatican to a phony miracle that becomes a media circus. Marcello talks about changing his life and doing meaningful writing, but there's just too much to distract him. He's the unofficial master of ceremonies for the party crowd, and a kind of Roman general to a small army of mosquito-like scandal photographers. He's the king of the Via Veneto, the official boulevard watering hole for the nocturnal fast crowd. Interesting women want to sleep with him, while he feels trapped by the demands of his live-in girlfriend. He talks about not wanting to be stifled by marriage, when he's really far too self-centered to give up a single night of sexual adventure. With the charm and looks that can turn the head of a movie star like Sylvia, Marcello sees no need to grow up. 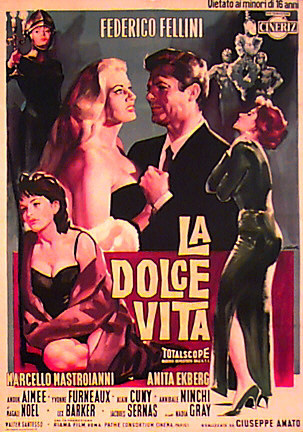 The movie insists otherwise, and La dolce vita is a parade of situations that show Marcello as an intelligent man unaware that he's been seduced by 'the sweet life.' He's surrounded by jaded intellectuals, obnoxious celebrities, the decadent rich and the sycophants who surround them. The paparazzi squad are the most obvious critical targets, harassing their targets shamelessly. But Marcello also has meaningful dialogues with two role models. He seeks advice from Steiner (Alain Cuny), a successful intellectual and a perfect family man. Marcello also has a surprise visit from his estranged father (Annibale Ninchi), a lively old fellow who suddenly seems to be an okay guy.

When this art movie goes symbolic, it doesn't go soft. Yes, the 'flying Christ' statue is a daring satiric gag, held aloft by a helicopter as it zooms across ancient ruins. It naturally provides the perfect pick-up introduction for Marcello to use on some bikini'd girls on a swanky rooftop. The statue reminds us of the stolen statue in I Vitelloni, but it becomes much more meaningful as the mirror image of the film's final symbol, the repulsive monster fish dredged out of the sea at the end of the film. Is it the 'rude beast,' the AntiChrist? Marcello floats in a life of pleasure that doesn't recognize traditional religious morality. He'll never voluntarily abandon this lifestyle, and the statue and the monster are representatives of dead values.

The statue is old and venerated but in the process of being trashed by vulgar modernism. It's made of inert stone, but its spirit is alive. The sea monster is a horrible living creature that reeks of death and corruption. In his sneakily moralist way, Fellini leads his debauched partygoers out through a grove of trees to witness this nasty symbol of their depravity.

Fellini's brilliance is to not spell this out in so many words. The 'symbol' can be just a rotting fish. We feel its significance, as opposed to reading it. And it sets up Marcello's final encounter with the angelic girl from the seaside café, the one with the bright and honest smile he's encountered nowhere else. He can't hear her; he has to be on his way, back to more of the same with his friends. The angel girl addresses the camera briefly at the fadeout as Fellini's Cabiria had done, and we get the same jolt of emotion. La dolce vita makes intimate human contact with us in a way that many of Fellini's later pictures don't.

As is usual with a movie that sums up and transcends its own moment in time, La dolce vita has its unrepeatable qualities. Marcello Mastroianni's stroll into the fountain with Anita Ekberg is the pinnacle of voluptuous glamour, a fashion-show of Italian style. Anouk Aimée also nails a timeless look, a natural cool that Marcello finds irresistable. The picture likely sold a lot of Triumph automobiles and Roman vacations.

Not yet able to cast his films entirely with stars helps La dolce vita; so does the fact that he hasn't yet settled into his later "all grotesques, all weirdos" casting philosophy. There are plenty of curious types here, but not the parade of circus clowns that send Giulietta degli spiriti over the edge. Notable in the cast are the beautiful Yvonne Furneaux (Repulsion, The Mummy) as the cloying girlfriend Emma, Laura Betti, Nico and Nadia Gray as various nightbirds, and Magali Noël (Rififi) as a nightclub dancer who takes a fancy to Marcello's father. Screen Tarzan Lex Barker plays an arrogant American actor who drives a Corvette and is known for playing Tarzan.

Koch Lorber's DVD of La dolce vita is a grade-A transfer. It's enhanced and (I'm fairly sure) mastered directly to NTSC, so there's none of the crisp sped-up feeling of 25fps Pal transfers. One of the extras is a restoration demo of the kind that Criterion eventually abandoned. We've learned to appreciate these glossy video cleanup jobs without the proof.

The extras are thin but reasonable. Richard Schickel's commentary isn't bad - he sketches the big themes and main ideas in the film very clearly - but he's also in his easy-going, conversational mode that makes us think he didn't really prepare before doing the talk, let alone collect any research. His discussion of the film's significance is authoritative, but there's a lot of filler verbiage: "Yes, it's another dawn again ... he's getting into his car ..." . On the other hand, Schickel has enormous credibility as a critic, and considering that he's talking off the cuff, he's remarkably articulate.

The second disc is on the the thin side. The Fellini TV collection is a set of unused 'commercials' he shot for one of his later movies but didn't use; they're mostly uninteresting. Remembering the Sweet Life gives us a look at Mastroianni and Ekberg thirty years later or so. She's turned into what Schickel called "an enormous creature" and there isn't much to the clip except the shock value of suddenly wishing she'd covered herself up more. Cinecitta The House of Fellini sounds like a docu about the studio but turns out to be a very short video tour of an exhibit commemorating Fellini's work. There are a few keepsakes lying around (the flying statue, perhaps?) but also a lame exhibit of clapperboards, each with a movie title, something you'd expect to see in the Hollywood Wax Museum. Another interview piece has Fellini talking briefly and unmemorably to a reporter on a stroll through a Cinecitta lane. There is a very nice still section, however.

The packaging has arresting graphics and good notes from Dennis Bartok on an attractive insert. The credits for the film list Pier Paolo Pasolini as one of the writers, even though he's uncredited on the film itself. Is that wishful thinking or correcting a mistake?