Futurama: The Beast With A Billion Backs

As creations like Fox's own Family Guy would prove, strong DVD sales make executives take notice. Groening approached the studio in 2006 with a proposal to create a new direct-to-DVD Futurama adventure, paving the way for rumors about a proper weekly revival for the series. These negotiations led to the announcement of four direct-to-DVD movies, which would later be reconfigured as sixteen episodes airing on the Comedy Central network. The first of these movies, Bender's Big Score, was released to DVD last November and received generally solid reviews from fans and critics alike (including yours truly). Even so, the four-year gap was evident at first: though it ended strongly, this grand re-opening celebration started out a bit uneven. For this reason, I had high expectations for the follow-up effort, The Beast With A Billion Backs; if nothing else, at least it wouldn't suffer from "We're Back!" syndrome. With that said, does this second adventure eclipse Bender's Big Score?

Not really...but it's still worth a look, since mediocre Futurama is still pretty darn entertaining. Picking up roughly three months after the events of Bender's Big Score, several immediate subplots reveal themselves soon enough. Fry pursues a relationship with Colleen, a young woman who has plenty of love to go around. Kif and Amy take their relationship to the next level, but the customs of his homeworld prove to be anything but conventional. Bender discovers a top-secret, robots-only club which he's believed in since "childhood". Most importantly, a mysterious tear in the universe---caused by the time-traveling shenanigans of the previous adventure---has yet to be explored. A planet-sized, octopus-like creature named Yivo (voiced by comedian David Cross) soon emerges, determined to spread love to the people of Earth and beyond...with his tentacles. It's not as bad as it sounds, of course: the masses fall victim to Yivo's noodly appendages, but he's pretty nice about the whole thing. 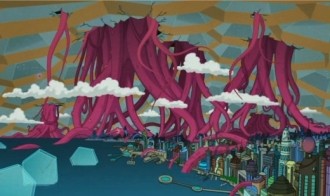 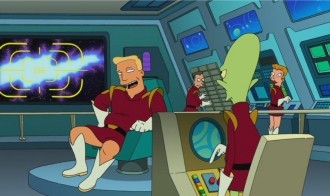 Rewinding a bit, let's get one thing straight: Bender's Big Score was far from a perfect movie. The creative team attempted to cram waaay too much into 90 minutes, if for no other reason than the joy of being back in action. Eventually, though, Bender's Big Score found its legs and, more importantly, its heart. The good news about The Beast With A Billion Backs is...well, it starts out strongly enough. There are plenty of genuine surprises as the story reveals itself, allowing things to run pretty smoothly for awhile. Yet the adventure gradually loses steam as the third act unfolds, resulting in a less-than-exciting climax and a few fizzled subplots (here's looking at you, Bender). Insultingly enough, yet another character cheats death---cartoon or not, it feels like the easy way out---and perhaps worst of all, no interesting seeds are planted for the next adventure. Here's the bottom line: The Beast With A Billion Backs aims for laughs and succeeds to a point, but the experience still feels a bit shallow and uninvolving.

With that said, certain story elements are much different than those found in Bender's Big Score. There's no singing and there's less Fry & Leela tension, for example...so if that turned you off during the previous installment, you'll probably enjoy The Beast With A Billion Backs a bit more. Additionally, the clever sight gags are as carefully tucked away as ever, plus it's got much more Zapp Brannigan...and that's never a bad thing, folks. But the fact remains that Futurama---and plenty of other TV shows, mind you---has always worked better in half-hour installments. It's doubtful that Fry, Leela, Bender and company will ever return to such a format, so here's hoping the next two movies are treated with a bit more care and moderation.

Fox's DVD presentation of The Beast With A Billion Backs is roughly on par with the first feature-length installment. The technical presentation is certainly up to par and the bonus features are entertaining and well-rounded, creating a solid one-disc release that Futurama fans can't help but enjoy. Let's take a closer look, shall we?

Like Bender's Big Score, The Beast With A Billion Backs is presented in 1.78:1 format and enhanced for widescreen displays. The film's vivid color palette looks bold and bright, image detail is strong and black levels are rock solid. No major digital problems---including digital combing, interlacing or pixellation---were spotted along the way, rounding out the visual presentation nicely.

The film's Dolby Digital 5.1 soundtrack is lively and active, though not much more so than the original series. In any case, dialogue is clean and clear, music cues are typically strong and a few clever directional effects can be heard along the way. English, Spanish and French subtitles (and Closed Captions) have all been included during the main feature, but not for the bonus material. It's disappointing that some studios continue to overlook this portion of DVD presentation. 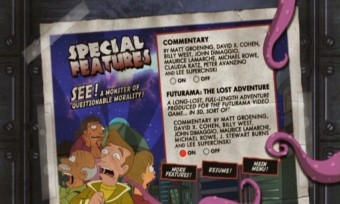 Seen above, the animated menu designs are basic and easy to navigate. The 89-minute main feature has been divided into 12 chapters, while no obvious layer change was detected during playback. This one-disc release is housed in an eco-friendly (but hardly durable) embossed paperboard package, featuring terrific artwork and a few visually-themed inserts.

Bonus Features
Leading things off is a feature-length Audio Commentary with plenty of familiar voices: creator Matt Groening, executive producer David X. Cohen, voice actors Billy West, John DiMaggio and Maurice LaMarche, director Peter Avanzino, co-writer Mike Rowe and producers Claudia Katz (from Rough Draft Studios) and Lee Supercinski. As usual, this is a lively and engaging track filled with introspective remarks, trivial tidbits and general tomfoolery...and ironically enough, it's almost more entertaining than the main feature itself. Those familiar with Futurama commentaries (Lord knows I am) should know what to expect, but n00bs will be pleasantly surprised.

Up next is perhaps the most unlikely and welcome supplement: "Futurama: The Lost Adventure" (30:11, below left), an animated "episode" pieced together from the 2003 X-Box game. These cel-shaded cut-scenes were originally presented as animated snippets between levels, and they appear here in uninterrupted fashion (with a few slight tweaks, of course) for the first time. Overall, this is an entertaining and worthy effort, further solidifying the fact that Futurama works best in smaller doses. An Audio Commentary for this episode is also included, featuring Groening, Cohen, West, DiMaggio, LaMarche, Rowe, Supercinski and writer J. Stewart Burns. Like the feature-length track, this is filled with plenty of great insight and goofiness. The video presentation leaves a bit to be desired...until Cohen admits to purchasing X-Box brand component cables to ensure halfway-decent picture quality, since the original source material wasn't available.

Up next is a slightly awkward Storyboard Animatic (21:44), presenting the first quarter of the film in sketch format with partial audio. It seems odd that we don't get a mixture of scenes---or, at the very least, a split-screen comparison with the final product---but this one's still worth a browse, especially if you're curious about early visual stages of animation.

On a similar note is a collection of Deleted Scenes (6 clips, 3:23 total), including an alternate extended opening, "Fry & Colleen Meeting", "St. Asimov Parade", "Zapp & Scientists", "Amy, Fry & Leela" and "Scruffy the Janitor". All are presented in various stages of completion---and though only "Fry & Colleen" is in truly finished form, all include partial audio and sound effects. Optional audio commentary would've been a welcome inclusion, but these will still be of interest to Futurama fans.

Closing things out is a handful of short production-related featurettes and other goodies. "Meet Yivo" (2:03) is a brief chat with voice actor David Cross, who happily munches on popcorn while discussing his otherworldly character. "Blooperama" (2:12, above right) captures key members of the cast flubbing a few lines behind the microphone. A 3-D Model Gallery (4:11), which shows us the development of several object and background designs, includes forced audio commentary with a few unidentified animators. "A Brief History of Deathball" (2:02), detailing the spiffy outfits and arena designs from the Labyrinth-like sport, includes forced audio commentary by the director. Last but not least, there's a Preview for Bender's Game (2:08), the third Futurama direct-to-DVD movie arriving this holiday season. Mark your calendars, folks!

All bonus features are presented in anamorphic widescreen and 1.33:1 aspect ratios (save for "The Lost Adventure", which is letterboxed at roughly 1.66:1), but no subtitles or Closed Captions are included. This is still a fairly satisfying assortment of extras overall, even slightly outpacing those found on Bender's Big Score. As an obligatory footnote, sharp-eyed viewers will find at least one minor Easter Egg on the bonus features sub-menu.

It aims for more laughs than Bender's Big Score, but The Beast With A Billion Backs feels a bit too uneven for its own good. Plenty of Futurama fans should still enjoy the show, however: loaded with plenty of colorful characters and creative twists, our adventure is entertaining despite its shortcomings. With two more straight-to-DVD movies on the horizon, the creative team still has plenty of time to perfect its formula; for now, let's just enjoy more Futurama while it lasts. Fox's DVD presentation is roughly on par with Bender's Big Score, boasting a solid technical presentation and plenty of worthwhile bonus features. Casual fans of the series will be happy with a rental, but dedicated meatbags should consider The Beast With A Billion Backs worthy of a purchase. Mildly Recommended.