"At midnight, I'll turn into a pumpkin and drive away in my glass slipper."

"And that will be the end of the fairy tale." 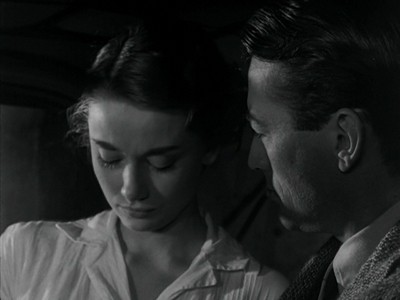 Audrey Hepburn spent most of her career starring in Cinderella stories, playing the average girl who could make herself over and earn her way into a higher status, finding love and happiness in ways she only dreamed about at the start of the picture. In this way, women in the audience--and a few of us fellows, too--could put themselves in her shoes, live vicariously through the heroines she portrayed.

It's funny, then, to think that her debut as a leading lady, William Wyler's Roman Holiday, is a kind of Cinderella story in reverse. Here the princess must step down from her throne and join the masses. So, too, did Audrey Hepburn come from on high to join pop culture forever.

Audrey plays Princess Ann, the first daughter in the royal family from an undisclosed European country. Bored with the demands of her upbringing and the constant attention it brings, she escapes from her handlers while on a European tour. The only catch is that she was given a sedative just before she left, and so the Princess finds herself having a hard time staying awake out on the streets of Rome. Lucky for her, a gallant reporter, Joe Bradley (Gregory Peck), finds her in her hour of need, and though reluctant, he rescues her and takes her to his apartment for safe keeping. He doesn't actually realize who she is until the next day, after he sees a news article claiming Princess Ann has taken ill. Seeing an opportunity to get out of the news ghetto, he decides to hang on to the Princess and get the scoop of a lifetime. Along with his photographer pal, Irving (Eddie Albert), Joe shows the newly dubbed Anya Smith, a.k.a. Smitty, the Italian capital, letting her indulge her every heart's desire. Ice cream, a haircut, dancing--the two have a blast.

They also fall in love. Despite barely being sealed with a kiss, it's one of the greatest romances in screen history: the Princess who yearns for a simpler life and the opportunist who discovers he wants more than money. Though Smitty knows she must return to being Princess Ann, for a moment she can imagine herself a regular girl loved by her average Joe. It's like Hemingway wrote at the end of The Sun Also Rises: "Isn't it pretty to think so?" Indeed, it is.

Shot entirely on the streets of Rome, Roman Holiday makes full use of the beauty of the city to create the aura of a fairy tale even as it grounds this romance in reality. Peck and Hepburn speed by the Coliseum on the back of a Vespa, and William Wyler isn't afraid to pull his camera back and show the audience how much larger the city is than his pair of lovers. It's visual foreshadowing for the incredible ending, to let us know that regardless of the hopes and dreams of two people in love, sometimes the world is bigger than they are. No matter how many times I see Roman Holiday, I am always amazed that the filmmakers stuck to their guns and didn't deliver the audience the Hollywood ending they expected, instead trusting them to realize that this was the ending they wanted even if they didn't know it. As Joe Bradley says, it's the end of the fairy tale. What happens in Rome stays in Rome.

Audrey Hepburn won the Oscar for Best Actress of 1953 for her performance in Roman Holiday, and it's an award well deserved. As far as film debuts go, it's tough to beat, and rarely did a star step onto the screen with her image so fully formed as Hepburn does here. Her Princess is charming and vulnerable, and the actress shows a natural instinct for comedy as well as appearing to be open to the world around her, soaking in the experience of a first movie the way her character soaks up her first tastes of freedom in Rome. For his part, I am not sure Gregory Peck has ever been dreamier. He is remembered best for the stoic, socially conscious roles he played in films like A Gentleman's Agreement and To Kill a Mockingbird, but the actor could also be suave and passionate, as evinced here. The comedic chemistry between himself, Hepburn, and Eddie Albert is wonderful.

Roman Holiday is an enduring classic. Some stories are timeless, and as long as filmgoers dream of having a life where they are free to roam, to do as they wish and love whom they desire, there will be something in them that will strike a chord. Over half-a-century has passed since Roman Holiday first began tugging at our heartstrings, and its pull has yet to be lessened. 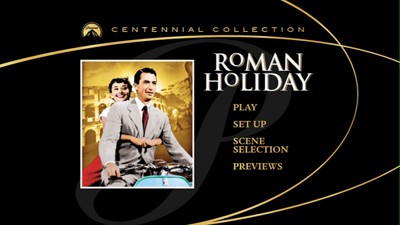 Video:
Roman Holiday has been on DVD before, with the most recent edition having been released in 2002. That full frame release was a pretty stellar package, earning high marks and having a nicely scrubbed and cleaned image. For the new 2008 Centennial Collection, Paramount appears to largely be sticking to the same source transfer, and it is almost entirely free dust or scratches and captures realistic, detailed tones. Note the comparisons below, which are screenshots taken as close to possible as I could get: 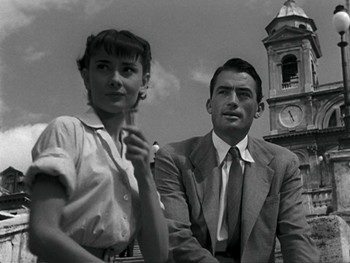 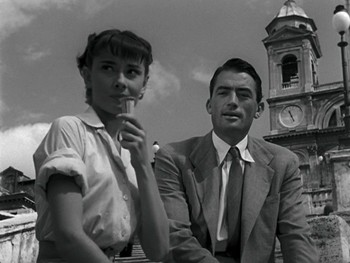 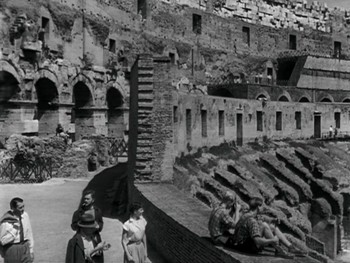 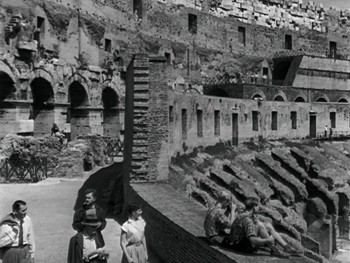 These images were chosen both to show close-ups and wider shots, and as you can see, in both, any difference is negligible. If anything, maybe the 2008 transfer looks a tad brighter, a little less "blue." If image quality would be the sole reason for a double-dip for the Roman Holiday fans out there, I'm not sure any upgrade is required.

Sound:
As with the 2002 disc, there are French and English audio tracks mixed in Dolby Digital mono. For this new edition, Paramount has also added a Spanish option. The English sounds very good, with clear tones and easy to discern dialogue.

There are also subtitles in all three languages.

Extras:
The new Roman Holiday - Centennial Collection release is a two-disc package, released in a regular-sized plastic case with a disc tray on each side. The case has an outer slipcover, and there is also an insert booklet with liner notes and photos. Disc 1 is entirely the movie, with one trailer for the new release of It's A Wonderful Life (colorized, because apparently someone forgot that was a bad idea back when Ted Turner tried to inflict that atrocious process on us). The second disc is entirely supplemental material, and the news there is good and bad.

The bad is that of the extra features from the 2002 disc, only the 6-minute, 50-second "Restoring Roman Holiday" and the collection of theatrical trailers is carried over to the 2008 disc. Both the 26-minute "Remembering Roman Holiday" featurette and the 14-minute "Edith Head - The Paramount Years" have been dropped, in favor of shorter, less Roman Holiday-centric programs on similar subjects. 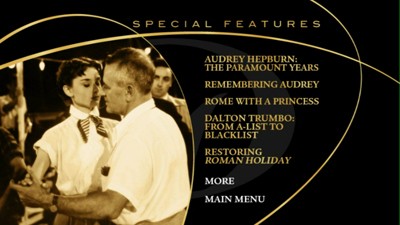 The disc leads with two Audrey Hepburn featurettes, "Audrey Hepburn: The Paramount Years" (30 minutes) and "Remembering Audrey" (12:10). The first covers her biography and her road to Hollywood, through her contract with Paramount that kicked off with her making Roman Holiday. The story line follows her meeting Mel Ferrer, working with Givenchy, and the six movies she made for the studio, including Sabrina and all the way to Paris, When It Sizzles. Vintage photos, wardrobe screentests, and newsreel footage (including her Oscar win) are mixed in with various talking heads, most notably producer A.C. Lyle and actress Stefanie Powers. "Remembering" is more personal, with her son Sean Ferrer and late-in-life companion Robert Wolders talking about their lives with the icon and their thoughts on her background.

"Rome with a Princess" (9 minutes) is a new featurette replacing the much longer old documentary about the movie from the 2002 DVD. The focus this time, though, is on the geography rather than the film's production.

A much needed piece about Dalton Trumbo, the writer who was blacklisted and thus could not have his credit on Roman Holiday for nearly 50 years, is here as "Dalton Trumbo: From A-List to Blacklist" (12 minutes). The career and personal passions of the author of Johnny Got His Gun are discussed by folks like Allan Rich and Marsha Hunt, a blacklisted writer and actress, respectively; Jean Porter Dmytryk and Betty Garrett, wives of a blacklisted artists; writer and filmmaker Nicholas Myer; and film professor Jonathan Kuntz.

Instead of the Edith Head feature, we now have the 5-minute "Behind the Gates: Costumes," looking through the studio archives at some of the famous outfits from popular Paramount films, including outfits as recent as Forrest Gump. Head is mentioned as part of it. In line with this is "Paramount in the '50s," a 9-minute, 35-second retrospective looking at famous films from the decade, many of which are to be included in this new Centennial Collection, a gathering of re-releases with new sequential spine numbers. (Roman Holiday is #2.) In fact, the latter documentary is also on the #1 and #3 entries in this collection, Sunset Boulevard and Sabrina, respectively. Also, according to the review here on DVD Talk, it appears that the Edith Head documentary has resurfaced on Sunset Boulevard, just as it did double-duty back in 2002 on the older edition of that same film. So, there are a lot of repeats and swaps going on here, it seems.

The stills gallery features four sections: Production, The Movie, Publicity, and The Premiere.

FINAL THOUGHTS:
I am a massive Audrey Hepburn fan, and her first film, Roman Holiday, is still one of her best. A timeless romance where a young princess sneaks away from her duty for a day to enjoy Italy with a stand-up American reporter, as played by Gregory Peck, it's funny and touching and wholly romantic. This new Centennial Collection edition features a new transfer that is as good if not better than previous DVD releases, as well as a bunch of new bonus features, many of which focus specifically on Audrey Hepburn. You may not really need a double-dip if you have the previous edition, but nevertheless, Roman Holiday - Centennial Collection is Highly Recommended. 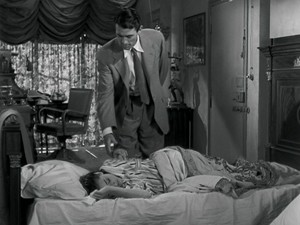 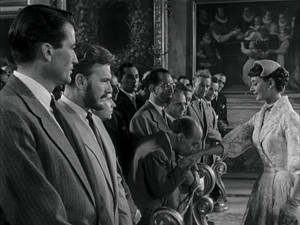