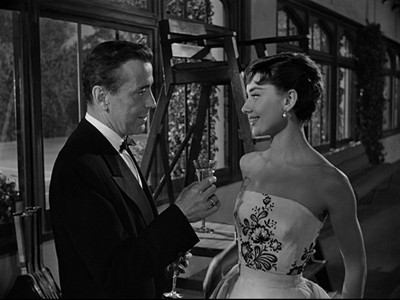 Audrey Hepburn's second film was the first of hers I saw, though if I recall I watched Sabrina for Humphrey Bogart, whom had become a bit of an obsession by then. I was also starting to learn a little something about director Billy Wilder through a blooming interest in film noir, so it was an unexpected twist in my movie-going plot that these two gentlemen would be upstaged by the gamine up in the tree of this romantic comedy.

Sabrina (Hepburn) is the chauffeur's daughter, a gawky teen who hides in the bushes spying on David Larrabee (William Holden), the youngest and the wildest son of the rich Larrabee family. By contrast, David's older brother, Linus (Bogart), is all stuffed shirts and responsibility. He runs the family company and is more likely to race through numbers and statistics than he is to race the roadster that David is so fond of. Ironically, it's only Linus that notices Sabrina, finding her in the throes of a dramatic suicide over David's cluelessness. Sure, Linus doesn't realize that this silly kid is being serious, but at least he knows her name.

All of this takes place on the eve of Sabrina's departure for Paris, where she will spend two years at a cooking school learning all about soufflés while also learning all the ways of the world that a girl can only acquire in France. She returns to Long Island a sophisticated seductress, ready to claim David as her own. The one wrinkle: Linus has promised David to the daughter of a sugar cane magnate so the Larrabees can get their hands on all the sugar they need for a new plastic compound they are pioneering. Seeing the thrice-married David about to go off message yet again, Linus runs interference, pretending to entertain his baby brother's fickle yearnings while keeping Sabrina occupied. Of course, no numbers or charts can prepare him for Cupid's arrow, and a legitimate love affair blooms in the unlikeliest of places.

Bogart is at his hound-dog best in this picture. Put the man in a tailored suit and take him out of the rough-and-tumble urban and wilderness environments he is better known for, and he actually cuts quite a dashing figure as an aging Prince Charming. Sure, there is a disparity in the years between him and Audrey Hepburn, but it doesn't seem nearly as pronounced as the age gap between her and some of her other leading men. (Wilder would pair her with Gary Cooper in Love in the Afternoon three years later, and it's never quite right; the pair are loving in two entirely different afternoons.) Perhaps it's Bogart's subtle vulnerability that makes it work. His Linus is a lonely man who may know plastics and even how to negotiate social mores as if they were boardroom gambits, but whom has ignored his heart as a result. Just as much as Sabrina needs to be rescued from that cad David, Linus needs someone to rescue him from himself. If there is a bit of a fatherly air to his schooling of the ingénue, the ingénue must also play mother to a boy who is still emotionally underdeveloped. Just look at the scene where Linus tries to dress up in his old college sweater: it's like he's swapped places with Sabrina, trying to look young much in the same way she's trying to appear grown up.

Audrey Hepburn is as delightful as can be in the film. To her acting credit, she is almost capable of entirely conquering her own natural glamour to make the teenaged Sabrina appear gawky and naïve. This also allows her to pull off the character's return from Paris, where she must first look like a little girl playing dress up only to reveal she truly is sophisticated in spite of herself. As romances go, one couldn't ask for a smarter director than Billy Wilder, who realizes that when falling in love, the reactions we show to one another aren't nearly as telling as the ones we think no one sees. When the David-Sabrina-Linus triangle begins, we can chart the various emotional upheavals on the dancefloor by the way a character's face changes amidst the turn of a slow dance. Thus, an unsuspecting Sabrina can enter a spin out of love and come around to face us again in love.

As with most Billy Wilder movies, Sabrina moves at a brisk pace, teasing the viewer along in ways that are never obvious or manipulative, even when we should be able to see the romantic outcome a mile off. Wilder co-wrote the screenplay with Ernest Lehman and Samuel Taylor, who originally wrote Sabrina as a stageplay, and he knows where all the pieces go. The director has an inherent storytelling instinct for when the narrative can be diverted into a humorous aside and when it needs to get down to serious business. At its core, Sabrina is a Cinderella story, but the fun twist is that the husband she's going to meet at the ball is not the one she expects, and as the audience, we get to go along for the ride as Sabrina figures it all out. 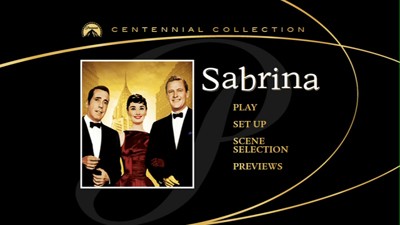 Video:
Sabrina has been on DVD before, with the most recent edition having been released in 2001 alongside some other films as part of an "Audrey Hepburn Collection". That full frame release looked very good and was given 4 1/2 stars by DVD Savant. That crisp and clean image appears to be, if not the same as the new 2008 Centennial Collection's transfer, then at least the starting point. The image looks fresh and gorgeous, with nary a hint of surface noise or digital enhancement. Note the comparisons below, which are screenshots taken as close to possible as I could get: 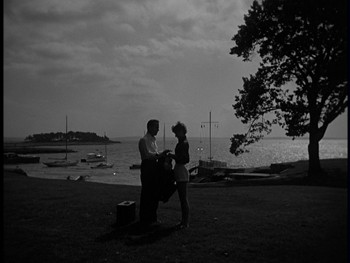 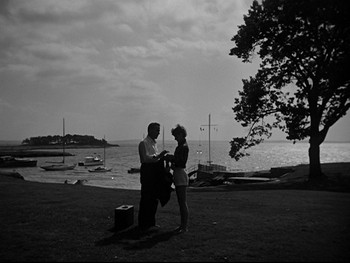 I think in this first instance there isn't much difference, though the older transfer is slightly darker. You also can see some lines around the frame in the 2001 images not visible in 2008. 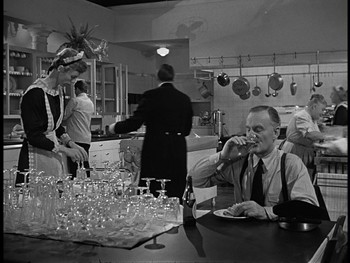 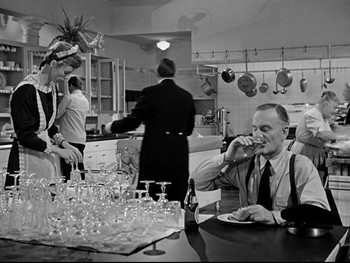 In this second example, it's a little hard to see, but in 2001 the bottom of the frame, particularly on the left, has some scratches and surface noise, and those are gone in the new transfer. So, we can surmise that there has been some more cleaning done for the Centennial Collection release.

Sound:
As with the 2001 disc, there are French and English audio tracks mixed in Dolby Digital mono. The same tracks appear here, along with a new Spanish mono option. The English soundtrack sounds very good, without any distortion or hiss. Everything sounds clean, including the complicated audio with the background orchestra at the dances as well as sound effects, such as when Linus is hearing the call of the cruise ship.

There are also subtitles in all three languages.

Extras:
The new Sabrina - Centennial Collection release is a two-disc package, released in a regular-sized plastic case with a disc tray on each side. The case has an outer slipcover, and there is also an insert booklet with liner notes and photos. Disc 1 is entirely the movie, with one trailer for the new release of It's A Wonderful Life (colorized, because apparently someone forgot that was a bad idea back when Ted Turner tried to inflict that atrocious process on us). The second disc is entirely supplemental material.

The 2001 "Audrey Hepburn Collection" version of Sabrina only had a photo gallery and short making-of featurette (just under 12 minutes). That video piece returns here retitled "Audrey Hepburn: In Her Own Words". 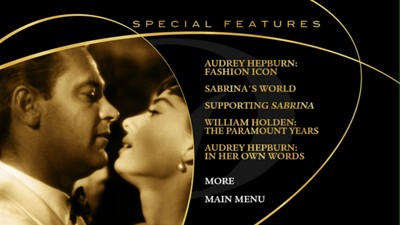 DVD 2 in this edition leads off with "Audrey Hepburn: Fashion Icon", a 17-minute, 30-second rundown of the actress' most famous looks with fashion designers like Isaac Mizrahi, Cynthia Rowley, and Eduardo Lucero and fashion historian Eddie Bledsoe sharing their opinions about what made Hepburn special. This covers more of Hepburn's Paramount movies than just Sabrina, and there is some focus on designers Edith Head and Hubert de Givenchy. Lucero and designer Trina Turk also take us through their Audrey-inspired fashion lines and talk about how to achieve her look.

"Sabrina's World" (11:25) looks at the setting of Sabrina, including real places on the Gold Coast of Long Island.

"Supporting Sabrina" (16:32) pays tribute to the famous Paramount character actors who rounded out the cast of the movie, including Sabrina's father as played by John Williams; Ellen Corby, who was Linus' secretary; the maid Jenny, Nancy Kulp; Marcel Dalio as the Parisian count who schools Sabrina; Walter Hampden, a.k.a. Mr. Larrabee; Francis X. Bushman, David's future father-in-law; and Martha Hyer, David's fiancée. This includes clips for other films the actors appeared in.

"William Holden: The Paramount Years" (24:40) is an examination of Holden's career, beginning as a Paramount contract player (shared at the time with Columbia), through the war years, and eventually becoming a huge star after success working with Billy Wilder for the first time in Sunset Boulevard. Actresses Pat Crowley and Stefanie Powers, actors Gil Stratton and Gene Reynolds, author Bob Thomas, and others talk about the man amidst photos and clips from his many movies. The piece touches on Sabrina, following with Holden's free agency in the 1960s and his work in preserving animals from extinction in Africa, and it ends with his early '80s work for Paramount in Blake Edwards' S.O.B.. He died shortly after.

"Behind the Gates: Camera" (5:07) takes us away from Sabrina to show us the development of motion picture camera technology at Paramount. The celebratory "Paramount in the '50s" documentary (9:35) that is featured on the other Centennial Collection discs is also included here. This new line of re-releases adds more supplements and is denoted by sequential spine numbers. Sabrina is #3, while #1 is Sunset Boulevard and #2 is Audrey Hepburn's first film, Roman Holiday. This "Paramount in the '50s Featurette" is a fun little run-through of the studio's heyday, but its continual presence on all three new releases is getting a little redundant.

The stills gallery features four sections: Production, The Movie, Publicity, and The Premiere.

FINAL THOUGHTS:
Highly Recommended. A Cinderella tale of the very best kind, Sabrina is a powerhouse of talent. Under Billy Wilder's direction, Audrey Hepburn, Humphrey Bogart, and William Holden bring alive a wonderful love story full of comedy and drama that continues to surprise and delight with its unexpected turns. This new Centennial Collection release appears to not just add a bunch of new extras, but it also looks like the film image has gotten a second scrubbing. Well worth an upgrade. 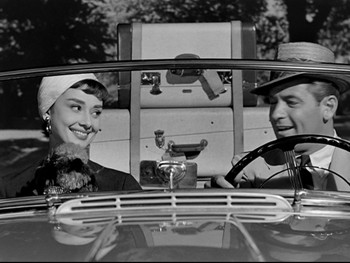 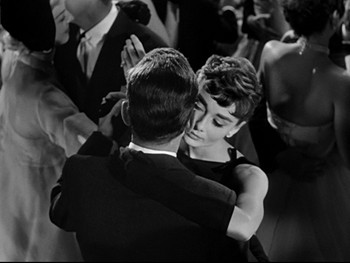