Spy Who Came in from the Cold - Criterion Collection 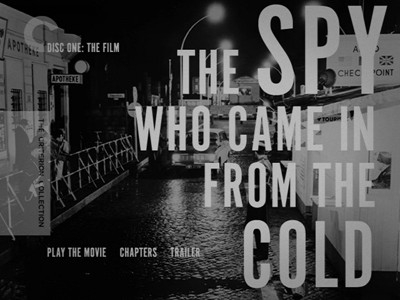 The thing that differentiates a great espionage picture from a bad or even merely good one is the same thing that drives the genre's detractors mad: the degree to which it leaves the viewer in the dark. When watching a spy movie, one should often be scratching one's head, sometimes even while exiting the movie theatre and the movie is over. Criss-crossing lies, duplicitous relationships, and a sense of futility are the spymaster's stock and trade. The Coen Bros. recently made great comedy hay out of the ridiculous obfuscation of these kinds of stories in their film Burn After Reading, keeping their hapless C.I.A. agents guessing as much as the audience--though in that case, the audience knew what the government didn't, that it all looked meaningless because it really was.

In the 1965 adaptation of the John le Carré novel The Spy Who Came in from the Cold, everything hinges on a similar question: does it mean anything at all to be out there fighting the Cold War, or do the wheels just continually grind on? Meaning vs. meaninglessness is of the utmost importance. The lead cloak-and-dagger man of the film, British covert agent Alec Leamas (Richard Burton), is regularly asked to state his beliefs. He says he has none, be it in God or Karl Marx or Santa Claus, and the answer is always met with skepticism. One of his enemies, the Communist agent Fiedler (Jules and Jim's Oskar Werner), even goes so far as to ask how a man can sleep at night without some kind of philosophy to keep him warm.

Alec is a veteran of the Cold War, having been the long-term head of British operations in East Berlin. He's seen it all, the trading of human lives and the dogmatic adherence to rules that forbids lending a helping hand to a defector running across Checkpoint Charlie until he's already reached the safety point. It leads to a man's death and gets Alec pulled back to England. He thinks he's going to be fired, but his boss (Cyril Cusack) has a much more ironic assignment for him. He will pretend to retire instead of taking a desk job, letting his disgruntlement be known, and then pose as a defector himself. Once he has crossed to the other side, he will confess to evidence that the Brits had planted long before, implicating the #1 commie, a former Nazi named Mundt (Peter Van Eyck), as a traitor and giving Fiedler reason to make a move against him.

That is about as clear about the plot as I want to be without giving too much away. That's even more than I knew going in, and the air of confusion and mystery is created rather quickly once Alec begins his undercover work. For the beginning of it, I wasn't quite sure if he had accepted the assignment or not, and until he meets one of le Carré's most popular characters, George Smiley (this time played by Rupert Davies), his true motivations for his prior actions are left unexplained. 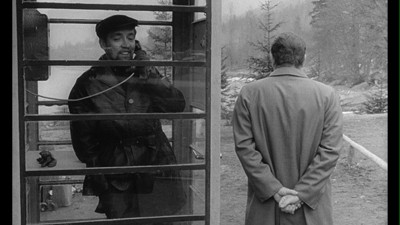 As are his true emotions. It's in that meeting with Smiley and their boss, the aptly named Control, that we get the sense that the young radical Alec met at the library he has been working at has actually made an impression on the heavy-drinking spy. The girl, Nan (Claire Bloom), is an idealist who thinks communism can bring peace, and her earnest commitment is laughable to an old cynic like Alec. Even so, the girl is kind to him, and when it looks like the operation to smear Mundt is going to get dangerous and pull him out of England, Alec does his best to protect her. Of course, this will also be his biggest mistake: for a man who sees no meaning in anything else, the fact that Nan now means something to him won't fail to go unnoticed.

The world of The Spy Who Came in from the Cold is a harsh one full of moral tundras that make the distinction between right and wrong seem childish. Even the phrase, which refers to an agent like Alec being brought back to regular life after field service, evokes a landscape that is dangerously chilly. (So much so that the characters in the film are always bundled up, no matter what country they are in.) If there is ever a case to be made for why some movies work best in black-and-white, it's a film like this, where the basic tonal values of the photography can drive home the extreme gulf between the warring points of view, not just in the use of whites and blacks but in all the grays that lay in the middle. Director Martin Ritt (Hud) and cinematographer Oswald Morris (Kubrick's Lolita) avoid the more stylized film noir aesthetic and its angular, perfectly placed shadows, instead choosing to go for a stark look borrowed from the Kitchen Sink school. The anger and the bile of working class British men is there in Alec, too. Richard Burton plays him as if he is always on the edge of an explosion, and when the flare-up does come, it's like a verbal pummeling, particularly in his climactic speech to Nan where he lays out all of the sordid details of his occupation, exposing the falsity of Control's earlier speech about what separates a noble society like England from their foes.

The true message that Alec must accept, though, is the one he delivers to Nan earlier. After discovering her anti-nuke, power-to-the-people leanings, Alec tells her an espionage parable, based on events he witnessed, where two grey trucks converged on a highway, crushing a family station wagon that was driving down the middle of the road between them. He didn't see the crash himself, he had moved on, never looking back. Though he thinks that the point of the story is that the mighty, interchangeable forces of world government always trample the innocent underfoot as they rush for power, the true message is the one that everyone else is trying to teach him: you can't stay in the middle, one must choose a side. It doesn't have to be either of the grey behemoths or even either side of the Wall they have built to separate their ideologies, it can be taking a stand against both of them in defense of the station wagon. You just have to stand for something. If you don't, you will find yourself caught in the no man's land, confused as to why the men on both sides of the divide have their guns trained on you. 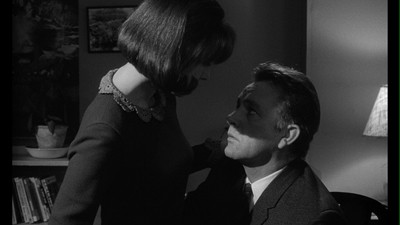 Video:
The Spy Who Came in from the Cold has been on DVD in Region 1 before, released by Paramount in 2004. I have not seen that disc--in fact, this is my first time seeing the movie--but I can't imagine it is superior to this new Criterion edition. The transfer on this DVD is superb, maintaining the 1.85:1 aspect ratio with a flawless anamorphic picture. There is no dirt or scratches, excellent blacks, and no digital glitches whatsoever. It's a gorgeous looking DVD.

Sound:
The original English soundtrack is given a Dolby stereo mix with optional subtitles for the deaf and hearing impaired. The audio is as good as the picture, sounding crisp and clear tones with excellent volume levels.

Extras:
The Spy Who Came in from the Cold is a double-disc set housed in a clear plastic case with a staggered two-tier tray. The cover and interior image are fantastically designed, with the very smart choice of having a shot of Checkpoint Charlie, the main passageway between East and West Berlin, straddling the inside covers. The interior booklet features more great photos, as well as a chapter listing, cast and crew credits, and a lengthy article about director Martin Ritt by film critic Michael Sragow.

The only bonus on DVD 1 is the original theatrical trailer. 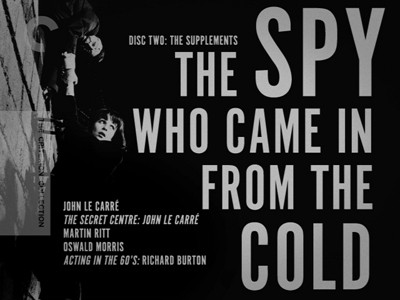 DVD 2 is nothing but supplemental material, leading with a new video interview with John le Carré (39 minutes) and a 2000 BBC documentary on the author, The Secret Centre: John le Carré (59 minutes). These are both fantastic features, giving viewers an in-depth look at the author who wrote The Spy Who Came in from the Cold. The new interview with le Carré, who is now in his late 70s, is marvelously candid, including the writer discussing his misgivings about the film adaptation and his animosity toward Paramount (hence a warning about the "views" expressed in the interview not being the studios, a disclaimer we rarely see on Criterion discs). le Carré shares a lot of great behind-the-scenes anecdotes from the set, illustrated by photos, including juicy tales of the contentious relationship between Richard Burton and Martin Ritt.

The BBC piece goes beyond the production of the film to relate the early biography of le Carré, from his education to his work at MI-5 and MI-6, and his eventual transition into writing and the effects on his personal and professional life due to the success of The Spy Who Came in from the Cold. Actual veterans of the intelligence community that would have been le Carré's contemporaries also share their views on the accuracies of his work.

An audio interview with Martin Ritt from 1985, conducted by Patrick McGilligan for Film Comment, has 50 minutes excerpted here. It covers the breadth of Ritt's career, including breaking into Hollywood and developing his talent. There is also a focus on his political leanings, the blacklist, and how stories of the disenfranchised interest him.

Cinematographer Oswald Morris provides scene-specific commentary for five scenes, including the opening and the ending, totaling just under 40 minutes. His description of the shooting, including how decisions were made and why, is very detailed and illuminates the creative thought process. To go with this, there is a gallery of the set designs, showcasing the intricate drawings of various set pieces seen in the film.

Acting in the '60s, a 33-minute BBC program featuring Richard Burton, shows the actor sitting down with Kenneth Tynan in 1967, talking about his start in acting and his philosophy of the craft. He opens up quite extensively about his choices and his landmark roles on stage and screen, though The Spy Who Came in from the Cold only gets a brief mention. It features Burton reciting favorite speeches from some of his best known stage roles.

FINAL THOUGHTS:
The Spy Who Came in from the Cold - Criterion Collection is a tremendously influential and powerful entry in the espionage genre. It's cynical and romantic, but in both cases, also realist. Richard Burton is fantastic as a secret agent at the end of his tether, losing the last of his faith in the system he is a part of while acting as a double agent in East Berlin. Shot in a stark, black-and-white style by director Martin Ritt and cameraman Oswald Morris, the film is a chilly portrait of the push-and-pull of the superpowers who then controlled the world. With a second disc of highly informative and entertaining supplements, this new Criterion edition of an old favorite is Highly Recommended. 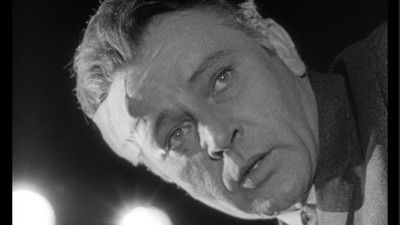