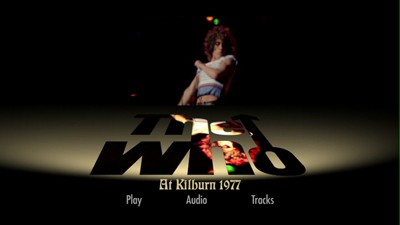 Are the Who vaults like a literal vault, something an enterprising rock fan could stage a heist to raid, or is it like the big warehouse where Indiana Jones' treasures go to gather dust? Just how expansive are they, and what will it take to throw their doors wide open once and for all?

Because after last year's spectacular Amazing Journey: The Story of the Who and now this year's release of The Who at Kilburn: 1977, the bits the band is teasing us with are astounding. Fans of the group will know what this 1977 concert is the moment they cast eyes on it, it's practically mythological. Shot after a long hiatus, and capturing Keith Moon's second-to-last performance as drummer, this was the concert organized to add some contemporary material to The Kids are Alright. Photographed on 35 mm film by six cameras, only a couple of songs were used in the documentary, leaving most of the performance to the ages. If you've seen Alright, this is the iconic concert with the big laser show during "Won't Get Fooled Again," the one where Pete Townshend slides on his knees across the stage in slow motion while Roger Daltrey unleashes that primal yawp that makes many other knees go weak. 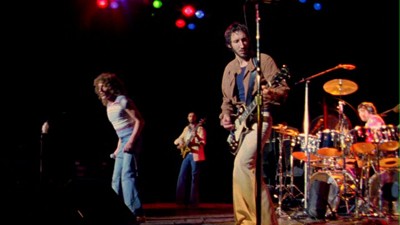 Well, not only do you get to see Pete's slide at its actual speed in Kilburn: 1977, but you get to see the rest of the 60-and-some-odd-minutes set at long last. The band is a little paunchy, having been off the road for a while, and this makes them a tad shambolic. It also makes them feisty, and after Peter loudly complains about the flabbiness of a couple of Tommy numbers ("Pinball Wizard" and "I'm Free"), it becomes a battle of will and energy to bring the rock.

Beginning with their cover of Eddie Cochran's "Summertime Blues," the Who climb that mountain, culminating in a wonderful racket between Townshend and Moon on "Who Are You" and, of course, the show-stopping "Won't Get Fooled Again." Townshend dances, he windmills; Daltrey prances and swings his microphone around; John Entwistle stands there being John Entwistle; and Keith Moon delivers one of the best drum lines you're ever going to hear. Leading up to that, it's mainly a greatest hits set, and too short by half, but what's here shows a band not yet ready to go gently into that good night. "Behind Blue Eyes" is tender and broken, whereas the hard blues of "Shakin' All Over" and "My Generation" sound defiant during Punk Year Zero, like they band are rebelling against the rebels. If this is the Who at the start of a tour, imagine the behemoth that would take the stage at the close of one. 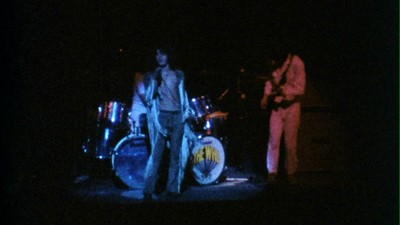 Not content to bring us just one concert, the band gives us a whole other unseen performance, The Who: London Coliseum: 1969, on DVD 2. Shot on 16 mm in a theater that was lit for performance, not for filming, the grainier piece is obviously more raw than its bigger budgeted counterpart, but no less thrilling. This is the Who as they were heading out to introduce Tommy to the world, the Who that would record Live at Leeds! This is a band taking full control and harnessing all of their power.

The gig starts off slightly poppy, with dancehall-inflected tunes like "Fortune Teller" and "Tattoo," but also showcasing the band's harder influences from the blues and heavier rock, including live staples "Heaven and Hell" and "Young Man Blues." The melodic power of the rock opera material is also given center stage with excerpts from "A Quick One" and Tommy.

It's interesting that the back half of the set list in 1969 has a structure that would stay solid even eight years later. The version of "My Generation" recorded at the Coliseum goes off in an extended jam that brings in elements of "See Me, Feel Me" and "Sparks." The band is totally in sync, pummeling their instruments with both force and precision. The scrappiness in '69, unlike in '77, is not of a battle-fatigued army trying to pull out another victory (which, naturally, they do), but the piss and vinegar of young infantrymen fully strapped. In both incarnations, the performances are explosive, regardless of how they light up the powder.

The Set List: Heaven and Hell * Can't Explain * Fortune Teller * Tattoo * Young Man Blues * A Quick One, While He's Away (excerpt) * Happy Jack * I'm a Boy * There's a Doctor/Go to the Mirror/I'm Free/Tommy's Holiday Camp/See Me, Feel Me * Summertime Blues * Shakin' All Over * My Generation

In addition to this main set, we also get the full versions of "A Quick One" and an extended version of Tommy, both of which aren't included in the main concert due to the occasional loss of picture or other print damage at different times in the numbers. (Audio also drops out during "Christmas" and the beginning of "Acid Queen.") When the picture is not available, the DVD producers substitute what we would have seen with a compilation of shots from elsewhere in the show.

The full Tommy set in particular really gives the band a chance to cut loose. Daltrey sounds impressively raw, for instance, on "Eyesight to the Blind," and the band really cranks up the energy for the longer instrumental portions. By contrast, "Sally Simpson" is softer and folksier, the bombast giving way to gentle melody.

The Extras List: Introduction/A Quick One While He's Away * Overture * It's a Boy * 1921 * Amazing Journey * Eyesight to the Blind (The Hawker) * Christmas * Acid Queen * Pinball Wizard * Do You Think It's Alright? * Fiddle About * Tommy, Can You Hear Me? * There's a Doctor * Go to the Mirror * Smash the Mirror * Miracle Cure * Sally Simpson * I'm Free * Tommy's Holiday Camp * We're Not Gonna Take It 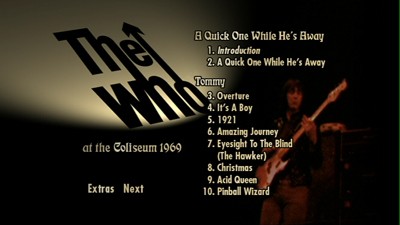 Video:
The main concert on The Who at Kilburn: 1977 is shown in a 1.78:1 aspect ratio. The anamorphic image is marvelous, fully cleaned for release and looking bright and spiffy. The Who have used the DVD era to their advantage, and this is another in a steadily growing line of technically proficient releases. Due to the source material being less preserved and of a lower general production value, the 1969 show is grainier by nature and has problems at times that arise out of how it was shot (shaky picture, jumpy edits) but that by no means render the concert unwatchable; nor are there any added problems as a result of the move to the DVD format.

Sound:
There are three audio mixes to choose from here: two Dolby Digital options, in 2.0 and in 5.1, and a DTS Surround option. These sound as smashing as the video looks, with good interplay between speakers and awesome clarity. You're going to want to crank it up loud, particularly the later show, because it sounds goooooood! The 1969 show is a bit tinny at times, but the distortion is minimal and is likely the best that could be achieved from the original master tapes.

Extras:
The Who at Kilburn: 1977 comes in a standard keepcase with a hinged tray and an outer slipcover. There is a booklet in the case with photos and lots of liner notes from various colleagues and fans.

Outside of the extended songs on DVD 2 that I've already mentioned, there is also a trailer for the Kilburn: 1977 show, which played at some movie theatres to celebrate the DVD release.

FINAL THOUGHTS:
The Who at Kilburn: 1977 is Highly Recommended, naturally. How could it not be? This is one of my all-time favorite bands releasing two stellar performances on top-quality DVDs! Both shows capture the Who at different points in their career, but each testify to what a musical powerhouse they were. Go get this. Go. Go! 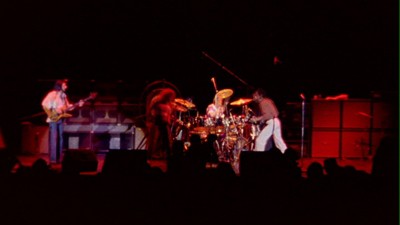